The F-108 Rapier was proposed as a high-speed interceptor suitable for the long-range defence of the USA against Soviet bombers of supersonic performance. Created by North American Aviation, the programme would inevitably have been very costly, and in an effort to offset some of the financial burden the fighter shared engine development with the same company’s B-70 Valkyrie strategic bomber and reused elements of earlier interceptor projects. The programme had advanced only to the wooden mock-up stage before it was cancelled in 1959. This reflected the programme’s high costs and also the USSR’s adoption of ballistic missiles as its primary nuclear weapon. Had it reached the hardware stage, the F-108 would have been the heaviest fighter of its era. After the cancellation of the programme, the F-108’s weapons system (Hughes fire-control system and the GAR-9 air-to-air missile) was adapted for the Lockheed F-12 interceptor, which was also cancelled but paved the way for the SR-71 strategic reconnaissance aeroplane. 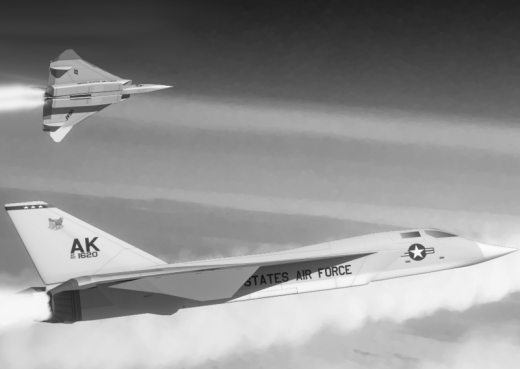 The origins of the F-108 programme can be found in a USAF requirement of the early 1950s, and it was on 20 July 1955 that development of the LRI-X (Long-Range Interceptor, Experimental) secured approval in an effort to create a successor to the Convair F-102 Delta Dagger and F-106 Delta Dart interceptor. The specification of 6 October 1955 demanded an interceptor which was able to reach 975 kt (1,122 mph (1806 km/h) or Mach 1.7 at 60,000 ft (18290 m) and also possess a range of 870 nm (1,000 miles; 1610 km). The interceptor was to be operated by a two-man crew, and have a powerplant incorporating at least two engines. An integrated fire-control system was to be incorporated, this allowed for the interception of a bomber at a range of 60 nm (69 miles; 111 km) and the destruction of three targets in the course of a single mission.

Eight US companies expressed interest in the programme, and of these North American, Lockheed and Northrop received preliminary design contracts on 11 October 1955. Of the resulting concepts, North American’s NA-236 was selected as the most promising. The NA-236 shared some similarities with the later F-108, but had two finlets at the mid-span positions of the horizontal tailplane, and canard foreplanes. Political and budgetary difficulties resulted in the cancellation of the LRI-X programme on 9 May 1956.

After considerable confusion, the programme was reinstated on 11 April 1957, when North American was contracted to build two prototypes of what was now known to the company as the NA-257 and to the US Department of Defence and USAF as the F-108 and also WS-202A (Weapon System 202A). The ‘new’ design was essentially similar to the NA-236, and at this time the USAF’s Air Defense Command had a requirement for 480 aircraft.

The design then proceeded through considerable conceptual development as a result of its advanced technology and a steady spate of changes in the USAF’s requirement. Early revisions prominently featured canard foreplanes with a span of 19 ft 10 in (6.04 m), and a wing of 53.5° sweep. In this form, the interceptor would have had a maximum take-off weight of 99,400 lb (45088 kg) and be able to reach a service ceiling of 72,550 ft (22115 m). In addition to its interceptor role, the F-108 was also proposed by the manufacturer as an escort fighter for its own B-70 Valkyrie supersonic bomber. Commonalities between the F-108 and B-70 included crew escape in an enclosed capsule and a powerplant based on General Electric YJ93 turbojet engines. It was also proposed that the F-108 could have been used to fill the gaps in the radar coverage provided by the Distant Early Warning (DEW) system: its speed would have made it possible for the F-108 to scan as much as 278,000 sq miles (720020 km²) per hour.

Major design and engineering changes were made from September 1958. By this time, however, the Strategic Air Command had lost interest in the escort fighter concept: for the task of accompanying the B-70 all the way to its target and back, the F-108 in its initial concept would have possessed only a marginal range capability. 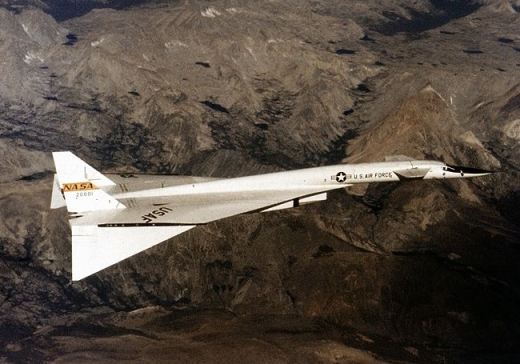 On 30 December 1958, the order for 31 YF-108A pre-production aircraft was trimmed to 20 test aircraft and the first test flight was delayed from February to April 1961. The definitive design, which was built as a full-sized XF-108 mock-up, was displayed to service officials on 17/20 January 1959. The project was given the name Rapier on 15 May 1959 after an Air Defense Command competition soliciting suggestions from its personnel.

At this time the F-108 programme was advancing smoothly, but there were indications of the developments which would finally result in the F-108’s cancellation. The combination of unconfirmed Soviet bomber threats, the accelerating trend toward offensive and defensive nuclear missiles in the late 1950s and early 1960s, and the steadily escalating cost contributed to the termination of the F-108 programme on 23 September 1959. North American continued refining its design into 1960 in hopes that the programme might be revived once again.

Great resources and time had been devoted to the F-108, but not all of these were wasted, for North American’s A-5 Vigilante supersonic reconnaissance bomber developed for the US Navy was based on the fuselage/weapon package and systems design of the Rapier. In many ways the Vigilante could be seen as the successful application of the Rapier design principles in a Mach 2 design. 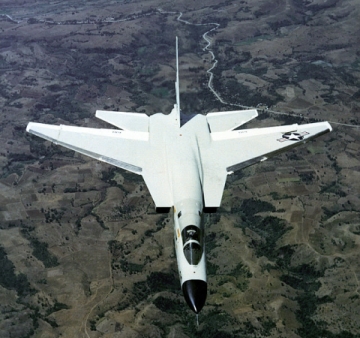 Hughes continued development of the ASG-18 advanced fire-control system and associated GAR-9 missile, and the USAF decided to use these in the YF-12 programme, and the final configuration for the YF-12A’s rear cockpit was similar to that of the F-108 since it incorporated the same displays and controls required for the fire-control system.

The initial layout for the F-108 featured a very large ‘cranked’ delta wing, fixed ventral stabilisers on the wings at the mid-span positions, and a tall all-moving vertical tail surface, supplemented by two ventral stabilisers which were extended as the landing gear retracted. Although some earlier versions of the design had had separate tailplanes and later canard foreplanes, both of these were abandoned in the final design. The large fuselage and wing incorporated two and five fuel tanks respectively, giving a combat radius estimated at 1,100 nm (1,266 miles; 2037 km).

The Rapier’s fire-control system was to have been based on the ASG-18 radar, the first US Pulse-Doppler equipment. This was to provide a ‘look-down/shoot-down capability’, but could track only one target at a time. The radar was paired with an IRST (infra-red search and track) system with its sensors of the leading edges of the wing. The radar was used to guide the Hughes GAR-9 (later redesignated AIM-47) air-to-air missile, of which three were to be carried on a rotary launcher in lower-fuselage internal weapons bay. The GAR-9 was a very large weapon, offering long range and incorporating its own radar for terminal homing. The missile was to fly at Mach 6 and reach a range of 97 nm (112 miles; 180 km).

As part of WS-202A, a design for a Mach 3+ aerial target for use in testing the F-108’s weapons system was proposed. The Wright Air Development Center requested the designation XQ-11 for the target design. This was refused as the whole programme was still in its infancy, and the F-108 programme was cancelled before further work was undertaken.