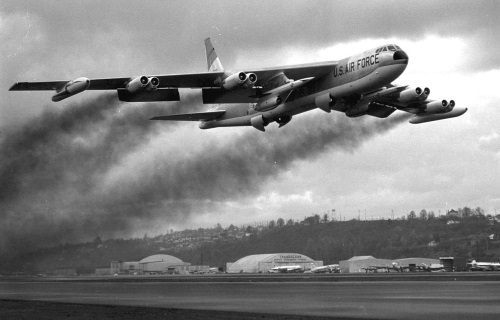 The North American AGM-28 Hound Dog was an air-launched stand-off missile developed from the late 1950s, and was created primarily to attack Soviet ground-based air defence installations and thereby open the way for Boeing B-52 Stratofortress manned bombers to attack the USSR. The missile was allocated the initial designation B-77, then GAM-77 and finally AGM-28. It was conceived as an interim stand-off missile pending development and production of the Douglas GAM-87 Skybolt air-launched ballistic missile, but the latter’s development was cancelled and the AGM-28 remained in service for 15 years until its replacement by two Boeing missiles, the AGM-69 SRAM and AGM-86 ALCM.

During the 1950s the USA became aware of great strides being made by the USSR in the development of surface-to-air missiles, which was a cause for great concern as the USA’s current nuclear deterrence capability was vested in manned strategic bombers. The solution adopted to overcome this problem was an ‘extended-range bomb’ of either the glide bomb type or more practically the air-launched short/medium-range missile.

As the Soviet air defence sites were static and therefore easily detectable air or satellite reconnaissance imagery, the concept was to use a long-range cruise missile to destroy these air defence sites before the bombers approached them. The current S-75 Dvina (SA-2 ‘Guideline’) surface-to-missile had a maximum range of about 18.5 miles (30 km), but as the bombers would be approaching S-75 sites their own missiles would have to be launched some time before the bombers entered SAM range. If the US missile was also to be used to attack Soviet air bases, a considerably greater range would be required. A missile with these capabilities was demanded in General Operational Requirement 148, which specified a supersonic air-to-surface cruise missile with a loaded weight of no more than 12,500 lb (5670 kg) and capable of being carried in pairs by the B-52 Stratofortress. Each bomber would carry two such missiles, one under each wing, on a pylon located between the fuselage and inboard pair of engines.

Vought and North American Aviation submitted GAM-77 proposals to the USAF in July 1957. Each submission was based on the company’s earlier work on long-range ground-launched cruise missiles: the Vought submission was for an air-launched version of the Regulus missile developed for the US Navy, and the North American offering was adapted from the Navaho missile. On 21 August 1957, North American was contracted to develop Weapon System 131B, which included the Hound Dog missile.

The airframe of the Hound Dog exploited technology developed in the SM-64 Navaho missile in a form revised for air launching from the B-52. The Hound Dog’s design was based on that of the Navaho G-38 missile, which featured small delta wings and forward canard surfaces. Power was provided by a Pratt & Whitney J52-P-3 turbojet engine in place of the Navaho’s ramjet engine. This engine was nacelle-mounted beneath the rear fuselage and, unlike the J52 engine installed in manned aircraft, was optimised to run at maximum power during the missile’s flight. Thus the Hound Dog’s J52 variant had an operating life of only six hours, reflecting the fact that the missile was expected to self-destruct in less than six hours.

The N5G derivative of the Navaho’s N-6 inertial navigation system, developed by North American’s Autonetics Division, was used in the Hound Dog, and a Kollsman star-tracker located in the B-52’s launch pylon was used to correct INS orientation errors with celestial observations while the Hound Dog was being carried by the bomber. The INS could also be used to fix the bomber’s position after the initial calibration process, which took about 90 minutes, and gave the Hound Dog a circular error probable of 3,800 yards (3475 m), which was deemed acceptable for a weapon equipped with a nuclear warhead.

The Hound Dog’s thermonuclear warhead was the W28, which could be preset for a yield between 70 kilotons and 1.45 megatons, and could also programmed for ground burst or air burst at a preset altitude; the former was intended for use against ‘hard’ target such as a missile site or command and control centre, and the latter against a large ‘soft’ target.

In the high-altitude attack, the missile flew at an altitude of up to 56,000 ft (17070 m), depending on the amount of fuel carried by the missile, all the way to the target area, whereupon the missile dived to its warhead’s pre-set detonation altitude. In the low-altitude attack, the missile flew at a pressure-determined altitude of less than 5,000 ft (1525 m) to its target, where its warhead detonated. In this mode, the missile had a range of only 400 miles (645 km), did not use terrain following, and had to be set on a course uninterrupted by major terrain obstructions. A variant of this low-altitude available to the GAM-77B (later AGM-28B) was a low radar-set altitude at any altitude between 100 and 3,000 ft (30 to 915 m) above the ground. The range was again shorter than that of a high-altitude attack, but the missile could fly in radar ground clutter and remain nearly invisible to radar detection. Eventually, all GAM-77A missiles were upgraded to this GAM-77B standard. In the dog-leg attack, the missile flew a pre-designated heading, at either high or low altitude, to a preset location, then turned to port or starboard and headed to its target. The object of this flight profile was to draw defending fighters away from the missile’s target.

The first air-drop test of a dummy missile was carried out in November 1958, and 52 GAM-77A missiles were launched for testing and training purposes between 23 April 1959 and 30 August 1965. The weapon’s development was completed in only 30 months. North American had received a production contract on 16 October 1958, and the first production missile was delivered to the US Air Force on 21 December 1959. Some 722 missiles were manufactured before production ended in March 1963. 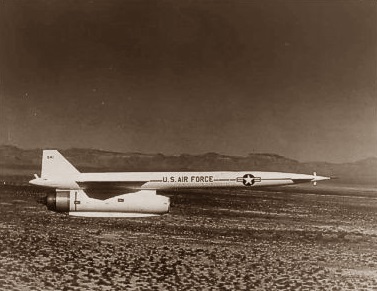 In May 1961 an improved GAM-77A missile, with improvements to reduce its radar cross section, was test flown for the first time. The missile already possessed a small head-on radar cross section because of its slender fuselage and highly swept delta wing, and this cross section was now lowered still further by the replacement of the original nose cap, engine inlet spike and engine duct with new components fabricated of radar-absorbent materials which scattered or absorbed radar energy. The GAM-77A also included a Kollsman KS-140 star-tracker integrated with the missile’s INS, and this unit replaced the celestial navigation star-tracker originally located in the B-52’s wing pylon. The fuel capacity of the GAM-77A was also increased during this upgrade, and a radar altimeter was added to provide a vertical terrain-following radar capability. Some 428 GAM-77 missiles were upgraded to this GAM-77A standard.

In 1971, a Hound Dog missile was test flown with the newly developed TERCOM (Terrain Contour Matching) navigation system, and it is probable that the designation AGM-28C would have been used for any production version  of this upgraded missile had development continued. No TERCOM-fitted development of the Hound Dog was ever deployed, but the technology, upgraded with improved electronics and digital computers, was later used in both the USAF’s AGM-86 Air-Launched Cruise Missile and the US Navy’s General Dynamics Tomahawk cruise missile.

In 1972, Bendix was contracted to develop a passive anti-radar seeker to guide the Hound Dog missile toward antennae transmitting radar signals. Such a combination was test flown in 1973, but the variant did not enter production.

It was in July 1960 that the Hound Dog reached initial operational capability with the B-52, and the missile was used on airborne alert for the first time in January 1962. In 1962, SAC activated missile maintenance squadrons to provide maintenance for both the Hound Dog and the ADM-20 Quail decoy missile. Full operational capability was achieved in August 1963 when 29 B-52 bomber wings were operational with the Hound Dog. In 1960 the Strategic Air Command developed procedures whereby the B-52 could use the engine of the two Hound Dogs for additional thrust while the missile was located on a bomber’s two pylons: this helped heavily laden bombers depart their bases more rapidly and therefore, it was hoped, clear them before they were obliterated by Soviet nuclear weapons.The Hound Dogs could then be refuelled from the B-52’s wing fuel tanks.

On 22 September 1966, Secretary of Defense Robert McNamara recommended that all remaining Hound Dog missiles be retired within a few years, the missiles being retained pending the outcome of TERCOM guidance system development, but this recommendation was not approved and the Hound Dog remained in service. After 13 years of service, the last Hound Dog missile was removed from alert deployment on 30 June 1975 and, after being kept in storage for a number of years, the last Hound Dog was retired for scrapping on 15 June 1978. 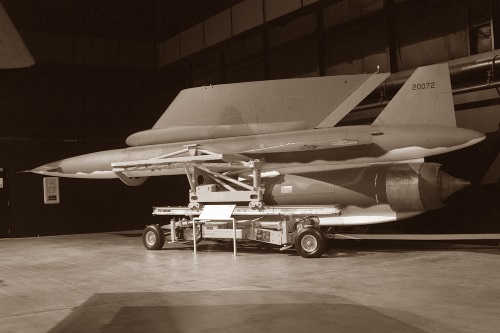