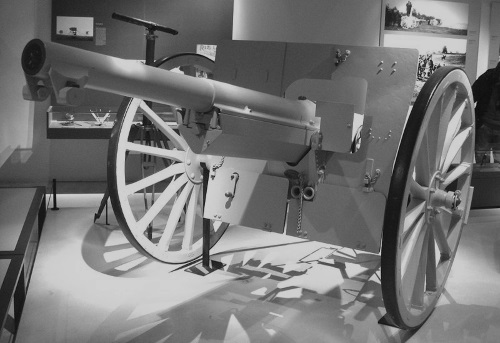 In the final stages of World War I, the ‘French 75’ or, as it was more formally designated, the Canon de 75 modèle 1897, became legendary in France as the piece of artillery which made it possible for the French army to win the war.

Its real fame, in historical terms, rests in the fact that it was the first of all field artillery designs of what may now be regarded as the ‘modern type’, as it combined a very efficient recoil mechanism – removing the need for the piece to be reloaded between shots – with a rapid-action breech design and a carriage in a package – which made feasible rates of accurate fire that, until the end of the 19th century, were the subject of fantasy rather than military reality.

The ‘75’ was designed between 1891 and 1896 by Lieutenant-colonel Albert Deport, Capitaine Etienne Ste Claire Deville and Emile Rimailho on the basis of an experimental 57mm weapon of 1891. This was based on what were, at the time, the most advanced artillery technologies of the period, namely Paul Vieille’s nitrocellulose-based smokeless propellant, which had been introduced in 1884; fixed (self-contained) ammunition in which a brass case contained the propellant and primer as well as the shell; an early hydro-pneumatic short recoil mechanism designed by Major Louis Baquet; and a rotating screw breech built under licence from Thorsten Nordenfelt. The only major technical change between the 57- and 75-mm pieces was the latter’s long recoil mechanism.

Long service in time and space

Before 1914, the ‘75’ was essentially a state secret. However, once it was put into action, it more than proved its worth – to the extent that the French army depended on its high rate of fire to make up for deficiencies in the availability of heavier artillery weapons.

Such was the success of the ‘75’ that more than 21,000 were manufactured between 1897 and 1940 by the French national arsenals at Puteaux, Bourges, Tarbes and St Etienne, and under licence in Mexico, Poland and the USA. The weapon served in the armies of France, the Baltic states, Belgium, Bulgaria, Eire, Finland, Germany, Poland, Portugal, Romania, Serbia, Spain, UK and USA, and later in Cameroon, Cambodia, Greece, Haute Volta, Laos, Mexico and Morocco. The ‘75’ saw service in a host of French colonial wars, as well as the Boxer Rebellion, World War I, Polish-Soviet War, Riffian War, Spanish Civil War and World War II. 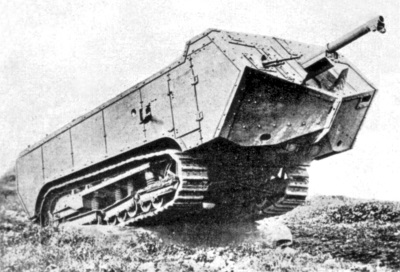 By 1939, the ‘75’ was rather past its best. Comparable weapons of other origins had surpassed it in technological terms, and it was outranged by more modern field gun designs. However, the French still had more than 4,500 of them in front-line service at the start of World War I. The ‘75’ of 1939 was in many cases very different from the ‘75’ of 1918. The USA and Poland had introduced split trail carriages in place of the original pole trail, and many nations, including France, had introduced  solid or pneumatic rubber-tyred wheels for motor traction in place of the original metal-tyred spoked wheels which had been deemed adequate for traction by a team of six horses.

The ‘75’ has also undergone some changes in role. Before 1918, many ‘75’ barrels had been placed on simple carriages to provide an anti-aircraft capability, both static and mobile, and despite their limited value, many such pieces were still in service in 1939. The ‘75’ has also undergone some adaptation as a form of tank weapon, but it was to be left to the Americans to make the most effective evolutionary development of this possibility with their adaptation of the type as the main gun for their M3 Lee/Grant and M4 Sherman medium tank series. In France the ‘75’ had been updated to Canon de 75 modèle 1897/33 standard with a new split-trail carriage, but by 1939 there were only a comparatively small number of these in service. 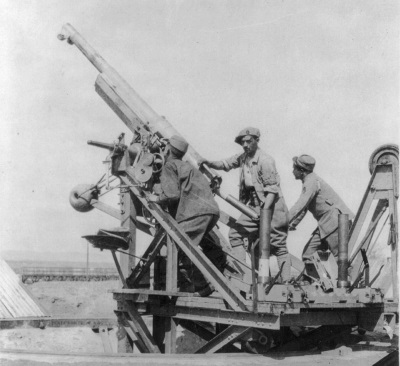 A new lease of life

In the catastrophic French defeat of May and June 1940, large numbers of ‘75’ guns were taken by the Germans and pressed many of them into their own service with the designation 7.5-cm FK 231(f)  or, more commonly, the 7.5-cm FK 97(f). The weapons were initially allocated to occupation garrisons and second-line formations, but later on, many others were incorporated into the beach defences of  the so-called Atlantic Wall.

The Germans also stockpiled large number of the weapon pending the time when  some use could be found for them. This happened during 1941, when the Germans discovered that the armour of the Soviet T-34/76 medium tank was effectively invulnerable to the shot fired by almost all German anti-tank guns. As a stop-gap measure, therefore, ‘75’ guns were taken out of storage to be revised with strengthening bands around the barrel and  placed on the carriages of obsolete 5-cm PaK 38 anti-tank guns: a muzzle brake was fitted  to reduce the recoil forces and special armour-piercing ammunition was hastily produced, and the  resulting weapons were deployed to the Eastern Front, where they proved capable, though only just capable, of penetrating the armour of Soviet medium tanks. This improvisation was known  to the Germans as the 7.5-cm Pak 97/38,  and operational experience revealed that it was really too powerful for the light anti-tank gun carriage, but it provided a limited capability until the Germans could field more potent anti-tank guns.