When the Mikoyan-Guryevich MiG-15 swept-wing fighter first entered combat in November 1950, during the early stages of the Korean War (1950/53), it almost immediately became clear that the only US fighter capable of meeting this advanced Soviet type on equal terms was the similarly swept-wing North American F-86 Sabre of the US Air Force, and that the US Navy’s two standard fighters, the straight-winged Grumman F9F Panther and McDonnell F2H Banshee, were completely outclassed. While ignorant of the MiG-15’s development and imminent advent over Korea, the US Navy had been concerned that land-based fighters with a swept wing and turbojet-engined powerplant were beginning to forge ahead of their straight-winged carrierborne counterparts during the later 1940s, but felt by the end of the decade that advances in aerodynamics, structures and propulsion were approaching the stage at which it was at last feasible to plan for a swept-wing fighter for carrierborne deployment.

In January 1949, therefore, the service contracted with McDonnell for the development of the US Navy’s first swept-wing carrierborne fighter, which was also the company’s first single-engined fighter and, of course, its first swept-wing type for the US Navy. The development of this new Model 58 fighter was beset by a number of problems, which meant that the type did not enter very belated service until March 1956, and this has led many to castigate the F3H Demon as a failure. This was most certainly not the case, however, for it was mainly powerplant difficulties that had occasioned the delay, and when the Demon did finally enter service it was still a most capable type offering significant operational advantages and paving the way for the truly classic F-4 Phantom II (which was preceded by the Phantom F-1) from the same stable. 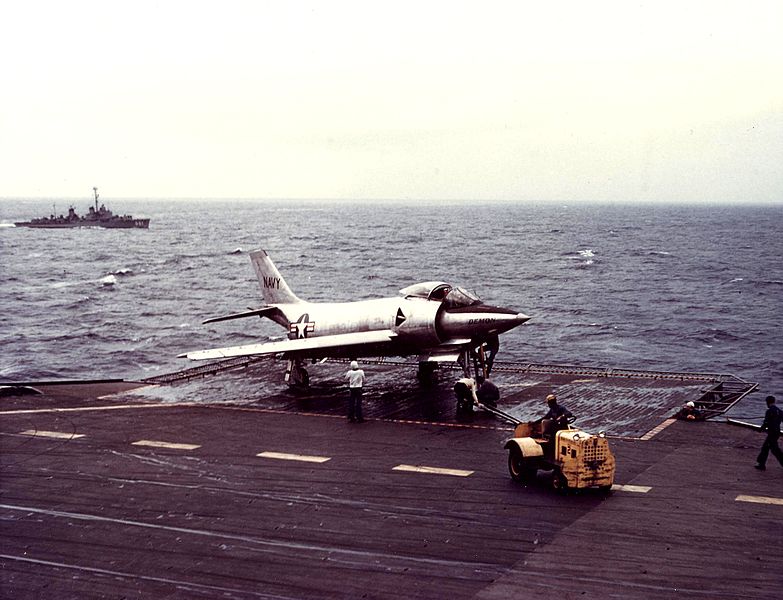 Initial design under the supervision of Richard Deagen proceeded well, and the new fighter’s mock-up passed its inspection without difficulty in July 1949, paving the way for a September 1949 order for two XF3H-1 prototypes. At this stage the F3H was schemed as a day fighter with swept flying surfaces and the powerplant of one axial-flow turbojet engine buried in the fuselage with aspiration via a pair of lateral inlets and exhausting via a nozzle under the vestigial rear fuselage that was in fact little more than a structural boom carrying the tail unit. The powerplant installation was notable for the short lengths of the inlet trunking and jetpipe, which reduced power losses to friction, but the whole concept was jeopardised by the US Navy’s selection of the Westinghouse J40 as the engine: much was expected of this engine, round which were planned many USAF and well as US Navy warplanes, but in the event the engine was a technical disaster beset by indifferent power ratings and very poor reliability.

These difficulties were still in the future, however, as work started on the detailed design and manufacture of the two XF3H-1 prototypes as mid/low-wing cantilever monoplanes of all-metal construction. The core of the structure was the oval-section fuselage which carried, from front to rear, the pilot’s cockpit (complete with an ejection seat under a clear-view canopy with a rearward-sliding section for access and egress) with the fixed forward-firing armament in the lower fuselage below it, fuel and oil tankage, the powerplant and, carried by the vestigial rear fuselage, the swept tail unit. This last comprised single horizontal and vertical surfaces, the former including the flat halves of the all-moving ‘slab’ tailplane and the latter including a standard fin and rudder assembly. Swept at 45°, the wing was slightly anhedralled, and designed so that the outer portions could be folded upward to reduce the aeroplane’s ‘footprint’ and thereby reduce flight deck and hangar requirements. All the control surfaces were power-operated and incorporated an artificial ‘feel’, and the moving surfaces on the wing included inboard slotted flaps and mid-board ailerons on the trailing edge, slats along the full span of the leading edges, and two upper-surface dive brakes to complement a pair of speed brakes on the sides of the fuselage behind the trailing edges of the wing roots. The airframe was completed by the landing gear, which was of the tricycle type with an extendible arrester hook under the engine. Each of the landing gear’s three units had a single wheel, and while the nose wheel unit retracted rearward into a door-covered bay in the underside of the fuselage, the two main wheel units retracted inward into door-covered bays in the underside of the wing.

As work on the first XF3H-1 was proceeding, the US Navy altered its requirement after deciding that the F3H would now be place in service a night and all-weather fighter rather than just a day fighter, and this required the modification of the nose to allow the incorporation of Hughes APG-51 search and fire-control radar. A revised mock-up was inspected and passed in July 1951, but it had already been decided not to alter the prototypes and thereby delay the flight test programme, in which the first two machines would now serve only for validation of the aeroplane’s flight performance.

The first XF3H-1 prototype recorded its maiden flight on 7 August 1951 with the powerplant of one XJ40-WE-6 engine rated at 6,500 lb st (28.91 kN) dry and 9,200 lb st (40.92 kN) with afterburning: photographs of the aeroplane were retouched to indicate small flush inlets rather than larger lateral inlets in the hope of persuading foreign analysts that the J40 engine was less powerful than it really was. The first prototype was lost soon after this, and the flight test programme therefore came to a halt until the completion of the second aeroplane some months later. This machine then undertook manufacturer’s, official and carrierborne trials. 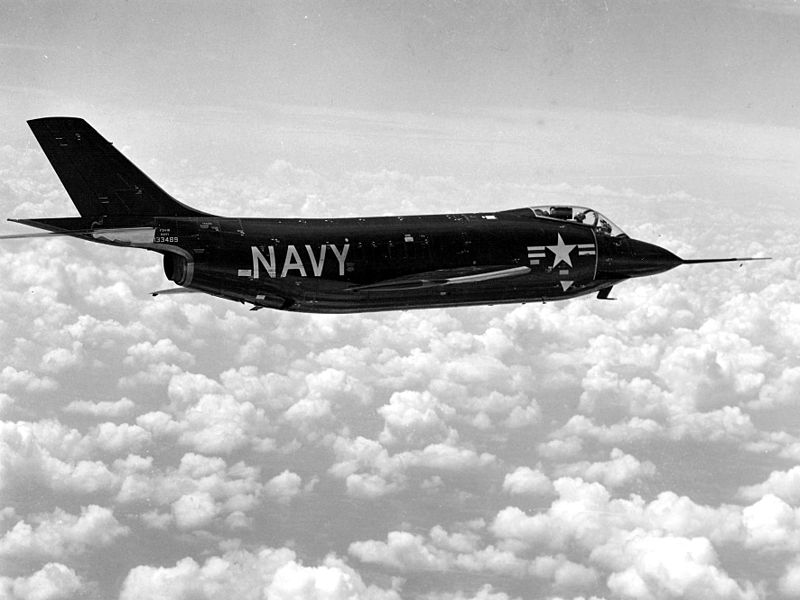 Such was the importance by now attached to the earliest possible service debut for the F3H that the US Navy had placed orders for no fewer than 440 F3H-1N production aircraft (including 100 to be manufactured by the Temco Aircraft Corporation) before the first flight of the XF3H-1. The long-term viability of this effort was then thrown into disarray by the change to the night/all-weather role and problems with the aircraft. Thus it was 24 December 1953 before the first F3H-1N took-off on its first flight with the powerplant of one J40-WE-8 engine rated at 7,500 lb st (33.36 kN) dry and 10,500 lb st (46.71 kN) with afterburning. An accelerated service evaluation was undertaken as soon as enough production aircraft were available but, after the loss of 11 aircraft and two pilots, the F3H-1N programme was halted after the delivery of just 58 aircraft that did not, in the event, enter operational service.

An analysis of the aircraft losses revealed a number of relatively small problems in the aircraft and their systems, but also confirmed that the major limitation was the J40 engine in its supposed initial definitive form as the J40-WE-22 rated at 7,200 lb st (32.03 kN) dry and 10,900 lb st (48.49 kN) with afterburning: this engine could seldom be persuaded to deliver its rated power, and was already notorious for its lack of reliability.

Some 29 of the surviving aircraft were later re-engined to F3H-2 standard, and although none of the machines survived to 1962, the type was allocated the putative designation F-3A in that year’s rationalisation of the three US services’ separate systems into one unified system.

The F3H-1P designation was reserved for a photo-reconnaissance derivative of the F3H-1N, but the type was cancelled in favour of the F3H-2P.

When it became clear that the J40 was a failure, R. J. Baldwin, Deagen’s successor as project engineer, approached the US Navy with the suggestion that the F3H be revised with a different and more effective powerplant. Such was its investment in the J40 that the US Navy was initially reluctant to agree, but the service then allowed McDonnell to assess the feasibility of replacing the J40 with the Allison J71 axial-flow turbojet engine. A mock-up of the revised F3H-2 was inspected and passed in August 1953, and some of the cancelled F3H-1 contracts were reallocated to the F3H-2.

The first two aircraft, which were to serve as prototypes, were converted during construction from the 32nd and 34th F3H-1N airframes, and featured not only the revised powerplant of one J71-A-2 engine rated at 9,500 lb st (42.26 kN) dry and 14,250 lb st (63.39 kN) with afterburning, but also a wing enlarged to 519.00 sq ft (48.22 m²) by an increase in chord ahead of the main spar. The first of the two aircraft made its maiden flight on 23 April 1955, and the success of the new type paved the way for the production of another 140 aircraft that entered service in March 1956, initially with the VF-14 squadron. Apart from its powerplant and revised wing, the F3H-2N differed from the F3H-1N in its ability to carry four AAM-N-7 (from 1962 AIM-9) Sidewinder short-range AAMs under its wing, and the aircraft that survived to 1962 received the revised designation F-3C.

Produced in parallel with the F3H-2N under reallocated F3H-1N contracts and first flown on 23 August 1955, the 80 F3H-2M aircraft had provision for the revised missile armament of four AAM-N-2 (from 1962 AIM-7A) Sparrow I medium-range AAMs with semi-active radar guidance. In 1962 the surviving aircraft received the revised designation MF-3B.

The F3H-2 was the first operational variant of the Demon fighter produced under its own rather than reallocated F3H-1N contracts, and the last of 239 such aircraft was delivered in April 1960 to end all production of the F3H series with the 519th machine off the production line after the last 76 on order had been cancelled.

The F3H-2, which received the revised designation F-3B in 1962, was basically similar to the F3H-2M except for its provision for AAM-N-6 (from 1962 AIM-7C) Sparrow III medium-range AAMs with semi-active radar guidance or up to 6,000 lb (2722 kg) of air-to-ground ordnance in the form of multiple rocket launchers and/or free-fall bombs.

Ordered to the extent of 24 aircraft in September 1952 but cancelled before the first had been completed, the F3H-2P was to have been the photo-reconnaissance derivative of the F3H-2 with cameras in the nose cone and erstwhile cannon bay.

Ordered to the extent of 90 aircraft that were cancelled before construction had started, the F3H-3 was to have been a much improved version of the F3H-2 with the revised powerplant of one General Electric J73-GE-3 axial-flow engine rated at 9,200 lb st (40.92 kN) dry and 12,900 lb st (57.38 kN) with afterburning.

The Demon served with at least 11 squadrons, and the last aircraft were not retired from first-line service until September 1964. 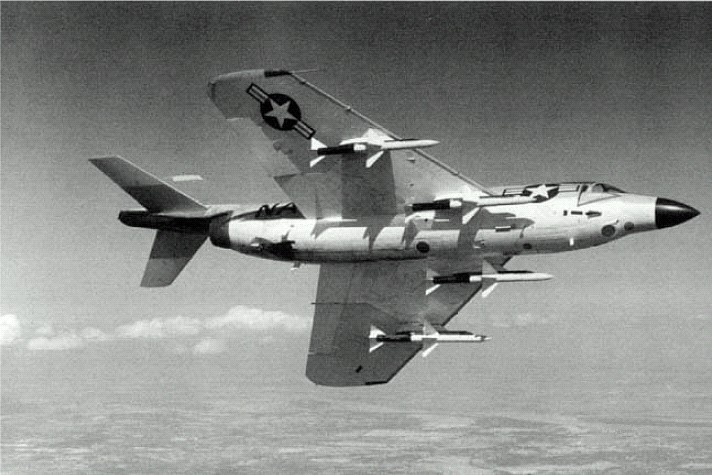 Fixed armament: four 20-mm Colt Mk 12 fixed forward-firing cannon with 150 rounds per gun in the underside of the forward fuselage

Disposable armament: up to 6,000 lb (2722 kg) of disposable stores carried on six hardpoints (two under the fuselage and four under the wing), and generally comprising four AAM-N-7 (from 1962 AIM-9) Sidewinder short-range AAMs, or multiple launchers for 2.75 or 5 in (70 or 127 mm) air-to-surface unguided rockets, or free-fall bombs