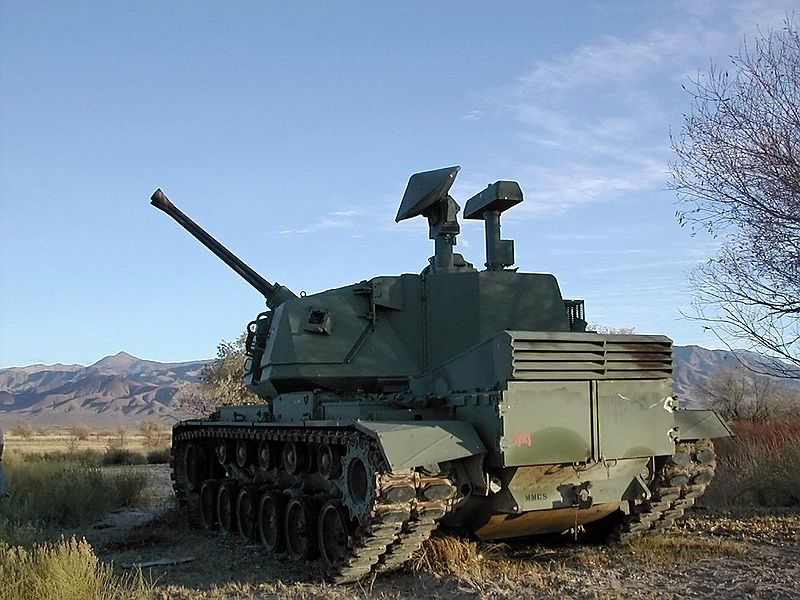 The US Army’s first useful self-propelled anti-aircraft gun mounting was the M19 Gun Motor Carriage based on the chassis of the M24 Chaffee. The turret of this manually operated system, armed with two 40-mm Bofors guns, was later modified and installed on the chassis of the M41 Walker Bulldog light tank to produce the M42 Duster. This was obsolete by the late 1950s on the grounds that it was ineffective against high-speed targets.

The first successor proposed for the M42 was the Sperry Vigilante, which was to have been based on a 37mm rotary six-barrel cannon. The cannon was very powerful and offered a very high rate of fire, but in the late 1950s the US Army decided that no gun-based systems could be adequate and therefore opted for the MIM-46 Mauler with detection and tracking radars and nine surface-to-air missiles on an adapted M113 armoured personnel carrier chassis. This had a wholly automatic fire-control system, but proved to be technically beyond the state of the art for its time, and was therefore cancelled in 1965. As stop-gaps offering modest capability, the US Army then opted for the M163 with the 20-mm six-barrel rotary cannon on an M113 chassis with an optical fire-control system, and the MIM-72 Chaparral with four AIM-9 Sidewinder missiles on a more extensively modified M113 chassis. Both the M163 and MIM-72 were optionally used in conjunction with the MPQ-49 Forward Area Alerting Radar.

During the late 1960s the combination of the helicopter and the anti-tank missile had improved to the point at which they represented a major threat to armoured forces. This was especially true of attack helicopters, which offered the possibility of loitering near the front behind cover to pop up, acquire a target, launch a missile, and then return to cover as the missile flew to the target. This and other considerations led the US Army to issue a requirement for an Advanced Radar-directed Gun Air Defense System. This offered the reaction speed of the M163 but with the range of the MIM-72, together with a fire-control system combining a forward-looking infra-red sensor and a laser rangefinder for all-weather and night operating capability, on a chassis offering the performance needed to allow the new system to keep up with the latest generation of armoured fighting vehicles in combat. This ARGADS was later renamed the Division Air Defense system.

The Soviet threat was deemed so dangerous at the time that the US Army decided not to follow its traditional step-by-step development and testing process. Instead, it advanced straight into production status by combining a number of off-the-shelf elements in an attempt to knock five years off the design, development and evaluation processes.

The DIVAD plan was revealed to US industries on 18 May 1977, and this called for a system based on the M48 Patton tank chassis, many of which were held in surplus depots. The DIVAD requirement called for the gun to acquire its target and start firing within 5 (later 8) seconds of it becoming visible or coming into its 3,300-yard (3000-m) range, and to possess a 50% chance of hitting a target with a 30-round burst. The system was also to have an all-weather capability and optical aiming capability.

Several companies responded to the DIVAD contest, and the proposal offered by Ford Aerospace was based on an armament of two 40-mm Bofors 40 mm L/70 cannon mounted in the centre of the turret, a large unit which also carried the separate antennae for long-range search and short-range tracking radars on its top. The antennae were mounted on booms to give them a clear view of the sky, and both could be folded down to reduce the vehicle’s travelling height. The tracking radar was a modified version of the Westinghouse APG-66 from the General Dynamics F-16 Fighting Falcon fighter, and the turret also carried a complete optical sighting and ranging system.

On 13 January 1978 General Dynamics and Ford were each given a development contract for one prototype, the XM246 (two 35-mm Oerlikon KDA cannon) and XM247 respectively, to be delivered in June 1980. Both prototypes were delivered to schedule, and this allowed a comparatively early start on competitive testing and evaluation. The XM247 was selected as superior on 7 May 1981, and given a fixed-price US$6.97 billion development and initial production contract for what now became the M247 Sergeant York. 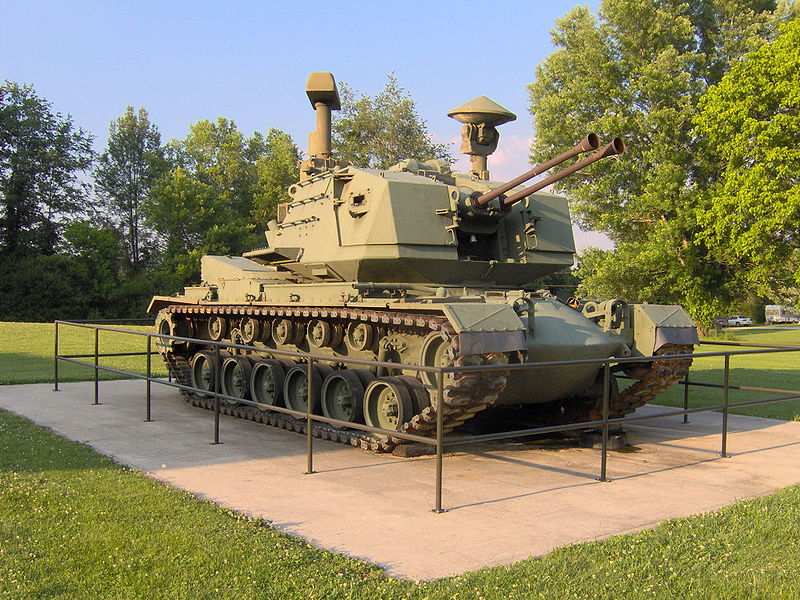 The M247 used an advanced dual linear linkless feed system to load each Bofors cannon. This feed system had upper and lower systems for each cannon, allowing the loading of HE and proximity-fused rounds in separate upper and lower magazines, which carried about 81 and 179 rounds respectively, to allow the firing of pre-programmed bursts deigned to shoot down eight helicopters before reloading was required. Rounds were loaded into the magazine system from the top of the turret, where the opening of a hatch allowed the attachment of a loading rack for the classic four-round stripper clips as rapidly as men could pass them up to the top of the turret. There were four line replaceable magazine units in mirror-imaged left and right components. The system was powered by a hydraulic motor and turned at 75 rpm, which was slow but fed the cannon very reliably.

The XM247 revealed problems almost immediately, most particularly with the tracking radar. This had problems with ground clutter, and in trials could not distinguish between helicopters and trees. Moreover, when the cannon were elevated to a high angle, their barrels projected into the radar’s line of sight and further confused the system. Reaction time was also too low: against hovering helicopters it was 10 to 11 seconds, but against high-speed targets it was 11 to 19 seconds, too long for the system to fire an effective burst.

The prototype’s reliability, availability, maintainability and durability lasted from November 1981 to February 1982, and revealed many operational concerns. The turret traversed too slowly to track fast-moving targets, and had serious problems in cold weather. The simple electronic counter-countermeasures system could be defeated by only minor jamming. The used guns taken from US Army stock had been twisted as a result of careless warehousing. The most unsurprising problem was that the M48 chassis, now 30 years old and carrying the new 20-ton turret, could not readily keep up with the modern tracked vehicles it was designed to protect.

Despite the development problems and an increasing level of criticism in the US media, the US nonetheless pressed for the deployment of the system – there was no alternative. To add to the M247’s problems, the advent of a new generation of Soviet battlefield helicopter and missiles offered a 6,500-yard (5940-m) engagement range, which was well beyond the M247’s ability to respond successfully. The US the Army announced it was considering the addition of FIM-92 Stinger missiles to the DIVAD system.

At this juncture, Secretary of Defense Caspar Weinberger ordered a series of battlefield-condition tests in 1984. The results were appalling. Unable to hit drones moving even in a straight line, the tests were later relaxed to hovering ones, but the radar proved unable to lock onto even this type of target, as the return was too small, and the testers had to add as many as four radar reflectors to the target before the radar could ‘see’ it. The system could now track the drone, but the following bursts of fire generally managed only to knock the target off course rather than destroy it.

Trials of initial production systems between December 1984 and May 1985 revealed a number of problems, failing 22 of 163 contract requirements, and 22 serious failures in operational readiness, and on 27 August 1985 Weinberger cancelled the programme after some 50 vehicles had been produced. 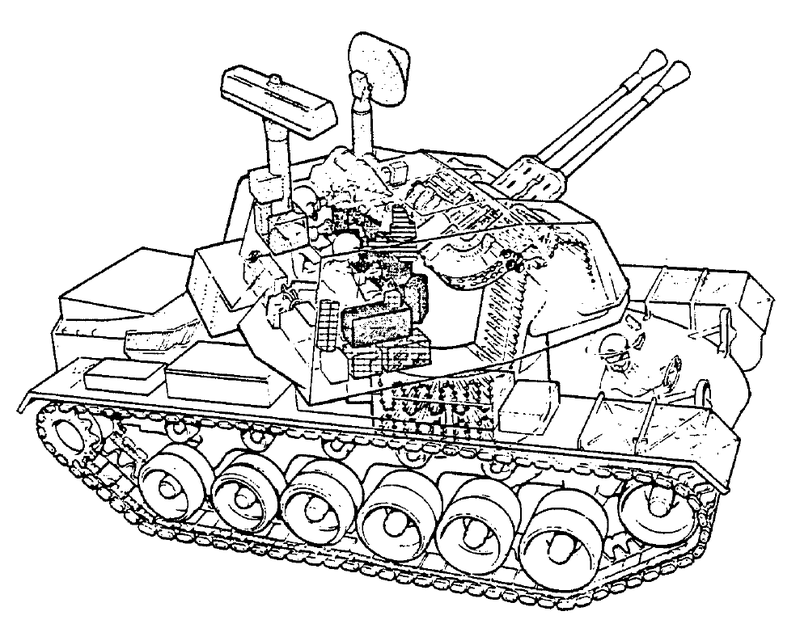