While in modern warfare the tank is considered the best vehicle with which to combat other tanks, in World War II there was considerable belief in the utility of dedicated tank destroyer. This was a vehicle in which protection was sacrificed to speed and agility to bring a tank-destroying gun within range of the target but then evading counter-fire through its ‘shoot and scoot’ capability: with a speed of 55 mph (88 km/h), the M18 Hellcat was in fact the fastest tracked vehicle of World War II.

The first such US vehicle was the M6 37-mm Gun Motor Carriage that entered service in 1942 on the basis of a 4×4 wheeled chassis with a 37-mm anti-tank gun on its flatbed rear and entirely without protection. Early in World War II there was considerable argument within the US Army’s Tank Destroyer Force as to the best vehicle to defeat enemy armour. A series of experimental vehicles had been built for the evaluation of wheeled, tracked and half-tracked chassis, but the results had been inconclusive. In December 1941 it was decided to develop a new dedicated tank destroyer whose design would draw on all the experience which the command had garnered up to that time. The key element in the thinking behind the new tank destroyer were thinner armour but greater speed than the tank, and an open-topped turret was considered appropriate as it would provide a better field of vision.

The new vehicle was to weigh in at a maximum of 26,880 lb (12193 kg) and have Christie long-stroke suspension to achieve high cross-country speed, and the armament was to be based on a 57-mm high-velocity gun rather than the 37-mm gun that was currently standard for the US anti-tank role. The result was the T49 57-mm Gun Motor Carriage, in which the suspension was changed to incorporate shorter helical springs and only slightly resembled J. Walter Christie’s basic design. The T49 could reach 50 mph (80 km/h), and its second prototype was the T67 75-mm Gun Motor Carriage with the 75-mm (2.95-in) M3 gun which also equipped the M3 Grant/Lee and M4 Sherman series of medium tanks. Trials of the T67 were very encouraging, and it was suggested that the T67 should be made more suitable for field service by the replacement of its powerplant of two Buick engines, inherited from the T49, by a standard tank engine, the introduction (for the first time on any US armoured vehicle) of torsion-bar suspension, and the adoption of the 3-in (76-mm) M1 gun in an open-topped and hydraulically powered turret providing 360° traverse and a gun elevation arc of 30° (-10° to +20°). The engine selected was the Continental R-975 air-cooled nine-cylinder radial engine, which meant that the drive sprocket was shifted from the rear to the front of the vehicle, and the same torque converter transmission (three forward and one reverse speeds) as used in the Sherman was also adopted. The tracks each had a ground contact length of 9 ft 9 in (2.97 m), and comprised 83 links running round five road wheels, four track-return rollers and a rear idler.

Straightforward development
Six pilot models of what was really a new design were ordered with the designation T70 76-mm Gun Motor Carriage, and the problem-free development process up to this stage meant that the US Army was confident enough to order an initial 1,000 production machines in January 1943. This confidence was well placed, for despite the fact that the weight was now 42,560 lb (19305kg), the new tank destroyer reached 55 mph (88.5 km/h) and the 3-in (76-mm) gun proved to be excellent, with the ability to fire its 15.4-lb (6.99-kg) AP projectile at a muzzle velocity of about 2,600 ft (792 m) per second. Other changes introduced in the production model were the elimination of the bow machine gun to reduce the crew from six to five, and the widening of the tracks to reduce ground pressure an improve operability on soft ground.

In February 1944 the T70 was adopted as standard by the US Army under the designation M18 76-mm Gun Motor Carriage, and the nickname ‘Hellcat’ given at the suggestion of Buick, the company which manufactured the type.

The M18’s combination of high speed and considerable mobility, a consequence of its high power/weight ratio resulting from a powerful engine and armour with an average thickness of only 0.5 in (12.7 mm), the M18 could change firing position several times during any engagement and was well liked by its crews. The Buick Motor Division of the General Motors Corporation built a total of 2,507 vehicles before production ended in October 1944. US thinking about anti-tank warfare encountered a paradigm shift after World War II; the tank was now considered to be the best anti-tank weapon, making the necessity of a dedicated tank destroyer a thing of the past. The need for the M18 subsequently disappeared from US army doctrine and many M18 vehicles were then supplied to several other countries. 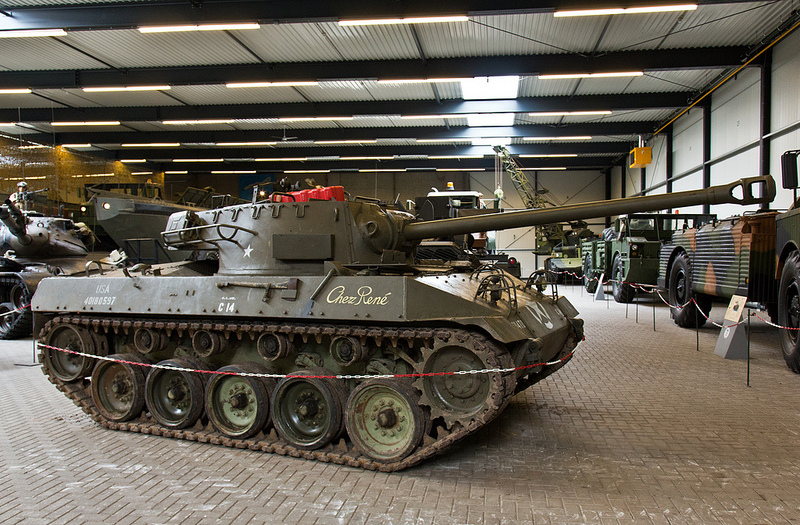 Considerable effort went into giving the relatively light M18 an amphibious capability; wading kits were produced, and attempts were made to install a variety of flotation devices. The T86 76-mm Gun Motor Carriage was the M18 with additional buoyancy compartments in a boat-like hull and a similar vehicle, the T87, mounted a 105-mm (4.13-in) howitzer. The T12 105-mm (4.13-in) howitzer was mounted in the open-topped turret of the M18 to create the T88 105-mm Howitzer Motor Carriage. Two other projects also affected the turret: firstly the bolt-on overhead armour was provided for the crew, and secondly the complete turret of the M36 tank destroyer was mounted on the M18 hull. The weight of this turret on the M18’s light hull resulted in stability problems when the gun was fired, and this 1945 development was terminated with the end of hostilities with Japan. In the early 1950s there was a project to lengthen and widen the hull and at the same time improve rigidity and waterborne capability, but this did not even reach the prototype stage.