At this time, as the Royal Air Force faces deep cuts in its personnel strength, aircraft numbers and overall capabilities, it is useful to look back as the service’s past. It is arguable that what has been achieved in the past can provide lessons for the way that a new slim-line RAF might reinvent itself. Right from its inception in April 1918 on the basis of the preceding Royal Flying Corps and Royal Naval Air Service, the RAF prided itself on the highest levels of professionalism right across the service, and therefore eschewed the notion of elite units that were so favoured by allies and enemies such as France, Italy and Germany, for the RAF deemed it invidious to categorise a few squadrons as excellent and the majority as adequate. Thus the RAF travelled through the financially straitened times of the 1920s and 1930s as a small but highly professional service, and then entered its period of expansion before World War II with every intention of maintaining its high standards.

Thus the first-line squadrons Bomber Command, Coastal Command and Fighter Command, together with those of the smaller commands, were all good in terms of their training and performance, and in was on this basis that Bomber Command developed into a massive night bombing arm, Coastal Command emerged into an effective weapon against the German submarine arm, and Fighter Command won the Battle of Britain and then spread its capabilities over the northern part of German-occupied Europe. The technical development of the service’s equipment then combined with the need to aid the main strength of branches such as Bomber Command to demand the creation of small numbers of more specialised squadrons to get the best out of the latest electronic equipment, use special weapons and, in the case of the pathfinder squadrons, lead bomber squadrons to greater accuracy by marking their targets for them.

So it was specialised rather than elite squadrons that began to appear in the growing list of squadrons operated by the RAF and dominion air forces operating under RAF control on Europe. The best known of these was No. 617 Squadron, which was created to attack German dams with Avro Lancaster bombers modified to carry Dr Barnes Wallis’s ‘bouncing bomb’, but others also emerged with capabilities that were exploited for special tasks. 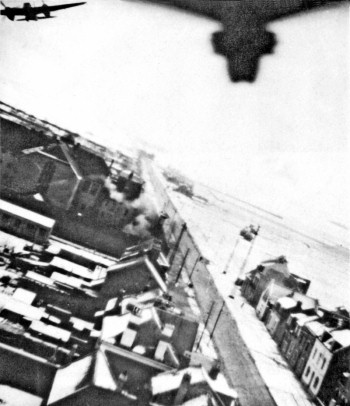 Operation ‘Jericho’, for example, was a low-level air attack on Amiens prison in German-occupied France undertaken on 18 February 1944 by 19 de Havilland Mosquito FB.Mk VI aircraft led by Group Captain Percy Charles ‘Pick’ Pickard. This very dangerous mission was flown by 18 aircraft of the Royal New Zealand Air Force’s No. 487 Squadron, Royal Australian Air Force’s No. 464 Squadron and RAF’s No. 21 Squadron, which were all part of No. 140 Wing in Air Marshal Sir Arthur Coningham’s 2nd Tactical Air Force; there was also one unarmed Mosquito of the Photographic Reconnaissance Unit. After Taking off from RAF Hunsdon, the Mosquito fighter-bombers were escorted by Hawker Typhoon fighter-bombers of the RAF’s Nos 174, 198 and 245 Squadrons, and the Mosquito PR aeroplane circled above the prison, filming the attack and reporting results to the attacking force. The aim of ‘Jericho’ was to free members of the French resistance forces, of whom 12 were scheduled for execution on the following day, as these were considered vital for the implementation of the Allied plans for sabotage in the Normandy area by French resistance forces immediately after the ‘Overlord’ invasion scheduled for June 1944. The Mosquitoes’ bombs breached the prison’s walls and damaged the guards’ quarters, and although 102 of the 717 prisoners were killed and another 84 injured during the bombing, 258 others escaped, this latter figure including 79 resistance fighters and political prisoners including Raymond Vivant and the 12 resistance members scheduled for execution on the following day. The British lost two Mosquito and two Typhoon aircraft in the raid, and the aircrew losses were three men killed and another three captured.

Another classic attack in the same mould was Operation ‘Carthage’ on 21 March 1944. This was another low-level attack, in this instance on the Gestapo headquarters in Copenhagen in German-occupied Denmark. Led by Group Captain R. N. Bateson and involving 17 Mosquito FB. Mk VI fighter-bombers of Nos 21, 464 and 487 Squadrons as well as one aeroplane of the Film Production Unit, the raid was launched from RAF Fersfield in Norfolk at 08.40, the Mosquito crews having been briefed to deliver their attack, at a height of only 100 ft (30 m), on the Shellhaus building, a six-storey unit accommodating the headquarters of the Gestapo in Denmark. It was in this, Danish resistance leaders had reported, that 38 of their operatives were being held on the top floor, and German plans were being completed for a series of mass arrests to paralyse the Danish underground movement. With an escort of 25 North American Mustang Mk III long-range fighters of No. 64 Squadron, the Mosquito aircraft flew for two hours across the North Sea, making landfall as planned. At about 12.00, and in weather that was now poor, the attackers reached Copenhagen, whose streets were thick with traffic and people. Such was the surprise achieved by the attackers that Flak batteries, only some 500 yards (460 m) away from the target building, were still covered with tarpaulins. Bombs from the first wave of Mosquito warplanes immediately hit the target building, Wing Commander P. A. Kleboe flying so low that he crashed into a flag pole. One crew reported seeing the bombs of the aircraft ahead of them entering the Gestapo building between the first and second storeys. Struck by eight 500-lb (227-kg) bombs, the building was left well on fire, 55 Gestapo personnel and 47 Danish employees were killed together with eight prisoners, 18 of the 26 prisoners survived to escape, and the organisation’s records were largely destroyed. Three other Mosquito aircraft failed to return, one of them crashing tragically into the Jeanne d’Arc school and causing 125 totally innocent casualties including 88 children. Even so, the attack had achieved its aim. The Mustang fighter force, which suffered two losses to Flak, encountered no air opposition.

An altogether different type of specialised operation was ‘Catechism’ on 12 November, which resulted in the German loss of the battleship Tirpitz. The very existence of this powerful capital ship in Norwegian waters was an impediment to the British activities of the Home Fleet over a considerable period, and a constant threat to the Allied convoys taking war supplies to the Soviet ports of Murmansk and Arkhangyel’sk via the Arctic convoy route round the North Cape. While in northern Norwegian waters Tirpitz had been attacked on 16 occasions (six times by RAF bombers and 10 times by Fleet Air Arm attack aircraft) between 28 January 1942 and 29 October 1944. By October 1944 the German battleship had been moved some 200 miles (320 km) south from her base in the Altenfjord, and now lay in the bay of Håkøybotn within the Tromsøfjord, about 3 miles (4.8 km) west of the city of Tromsø. On 29 October a force of 38 Avro Lancaster heavy bombers, operating from a Soviet base and each carrying one 12,000-lb (5443-kg) ‘Tallboy’ penetration bomb, set off in Operation ‘Obviate’ to attack Tirpitz, which was damaged at the stern by a near miss that was the best the RAF bombers could manage in adverse bombing conditions of patchy cloud. Air Chief Marshal Sir Arthur Harris, commanding RAF Bomber Command, decided that another raid was in order, and ‘Catechism’ was launched from RAF Lossiemouth as soon as the weather permitted, on 12 November, by 31 Lancaster bombers of Nos 9 and 617 Squadrons, each bomber armed with a single ‘Tallboy’, and one film unit aeroplane of the RAAF’s No. 463 Squadron, under the command of Group Captain James Brian Tait. Poor liaison amongst the German armed forces meant that German fighter cover from Bardufoss did not appear, and the Lancaster bombers were able to bomb without hindrance. Tirpitz was hit by three of the bombs: one was disrupted by glancing off turret armour, but the other two smashed through the ship and blew out her bottom. Another three bombs detonated under the water close alongside and caused more damage. The battleship capsized and came to rest with her superstructure on the bottom of the Tromsøfjord, and of the battleship’s crew of about 1,900 men, 1,000 or so were trapped inside her, only some 85 being rescued after a hole had been cut in the ship’s exposed bottom. Tirpitz had previously survived some 19 bomb hits, including one 12,000-lb (5443-kg) and five 1,600-lb (726-kg) weapons, in air raids which had cost the British 13 RAF and 19 Fleet Air Arm aircraft.