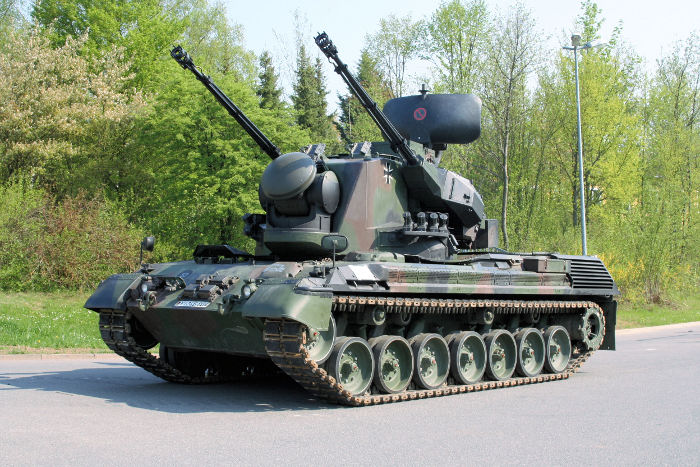 When it was re-formed in the 1950s, the West German army was equipped largely with American weapons. Among these were a quantity of M42 self-propelled 40-mm AA gun mountings. These weapons were then adequate, but the increasing sophistication of the potential European battlefield meant that even by the early 1960s they were completely obsolete. However, in 1958 the West German ministry of defence had taken the initial steps towards the development of a self-propelled AA gun mounting carrying two 30-mm cannon and a sector-search radar tied into an advanced fire-control system in a turret weighing no more than 4500 kg (9,921 lb) and capable of being installed on the chassis of an armoured personnel carrier to provide a weapon system weighing no more than 45000 kg (99,206 1b). During the early 1960s four prototypes (two from the British Manufacture & Research Company and two from Rheinmetall) were extensively tested. In 1965 the project was halted as trials had confirmed earlier fears that an armoured personnel carrier chassis was too light and too small to accommodate such a system.

In the same year, however, the West Germans decided that the technology was available for the development of a yet more advanced system based on the chassis of the Leopard 1 main battle tank carrying an all-weather radar fire-control system. Two different prototype systems were ordered, in the forms of the Matador with two 30-mm cannon from a team comprising AEG-Telefunken, Krauss-Maffei, Porsche, Rheinmetall and Siemens, and the 5PFZ-A with two 35-mm cannon from Contraves, Hollandse Signaalapparaten, Krauss-Maffei, Oerlikon-Bührle and Siemens-Albis. The prototypes were extensively tested in the late 1960s, and in 1970 it was decided to concentrate efforts on the multi-national 5PFZ-A developed largely in Switzerland. This was already maturing into 5PFZ-B with the original Hollandse Signaalapparaten radar replaced by a new suite with a Siemens MPDR 12 radar and an on-mounted Siemens DII 211 (formerly MSR 400) IFF system.

The 5PFZ-B was ordered into production in 1973, with Contraves as prime contractor and Krauss-Maffei as chief constructor. The first production-standard examples of the 5PFZ-B2 self-propelled 35-mm twin AA gun system, also known as the Flugabwehrkanonenpanzer Gepard (Flakpanzer Gepard for short), entered service late in 1976. Production was completed in 1980, and amounted to 195 basic vehicles and 225 5PFZ-2BL improved vehicles fitted with a Siemens laser rangefinder.

As noted above, this extremely capable all-weather low-level air defence system was based on the hull and automotive system of the Leopard 1 main battle tank, though slightly lengthened and carrying thinner armour in this application. The tank’s turret was replaced by an Oerlikon-Bührle GDP-C02 turret with its commander and gunner, the twin 35-mm Oerlikon-Bührle KDA belt-fed cannon, the Contraves analogue fire-control system, and the two Siemens radars. These last were the MPDR 12 coherent pulse-Doppler search radar operating in the E/F-bands for the detection of targets out to a range of 16000 m (17,500 yards), and a Siemens-Albis pulse-Doppler tracking radar operating in the J-band for the tracking of targets out to a range of 15000 m (16,405 yards). The turret was driven hydraulically from the main engine, with electrical back-up from a 66-kW (88.5-hp) Daimler Benz OM314 multi-fuel auxiliary power unit, with manual reversion as a final possibility. Turret traverse through 360° was possible at the rate of 90° per second, and the cradle-mounted cannon on the sides of the turret could be elevated in an arc between -10° and + 85° at the rate of 45° per second. The Gepard had a land navigation system, and this was used to keep the radar screen oriented to the north. The MPDR 12 radar had its antenna above the rear of the turret and could be swivelled to lie flat on its back when not in use. It could be operated with the vehicle on the move, and swept continuously through 360° for rapid detection of all potential targets within its surveillance range. Targets were automatically interrogated by the integrated IFF system and displayed on the screen, the crew being alerted at the same time, together with bearing, angle and range data.

Any target identified as hostile was designated by the commander to the tracking radar, whose antenna was located on the turret front on a swivelling mount so that it could be turned inward when not in use. This Siemens-Albis equipment was designed for automatic tracking of targets within a 200° arc, offering useful capability without precise azimuth alignment of the turret. Such tracking was undertaken in terms of target bearing, elevation and range displayed on the gunner’s screen while the main radar continued its search for fresh targets. Back-up target acquisition and tracking capabilities were provided by the periscopic sights in front of the commander and gunner. These optical units had selectable magnifications of x1.5 and x6, could be slaved to the tracking radar, and could each be fitted with an optical tracking indicator.

For the solution of the fire-control problem, the tracking radar’s data were fed into the fire-control system together with climatic data which is updated on a daily basis, continually-monitored muzzle velocity and vehicle inclination.

The cannon are cocked hydraulically, and the same system is used for the booster system for the ammunition fed to the cannon by fixed and flexible chuting that is hermetically sealed to prevent the intrusion of exterior contamination into the fighting compartment.

The Gepard’s capability was enhanced by its possession of an NBC system, a comprehensive testing and monitoring unit capable of switching in the fire-control system’s stand-by computer if required, and a special coating on exterior surfaces to reduce the vehicle’s infra-red detectability. The possibility of further improvement was under serious consideration for a vehicle retrofit programme planned for the early 1990s. The main features were the replacement of analogue computing by a digital system, the installation of an optronic fire-control system, the upgrading of the cannon for greater reliability and yet higher muzzle velocity, and the adoption of a new range of ammunition possessing considerably higher muzzle velocities. The optronic fire-control system was to have thermal imaging and tracking for entirely passive operation as an alternative to the active radar system that was becoming increasingly vulnerable to anti-radiation missiles. The updated Gepard system was planned for integrated use with a land-mobile radar system.

The Gepard was also bought by the Belgian and Dutch armies. The Belgian order resulted in 55 vehicles similar in all essential respects to the West German model, but the Dutch order (for 95 vehicles delivered between 1977 and 1979) resulted in the modified 5PZF-C CA1 Caesar. This had Hollandse Signaalapparaten monopulse-Doppler integrated search and tracking radars. The search radar was an I-band equipment with a range of 15000 m (16,405 yards), and the tracking radar a dual-frequency K/L-band equipment. This revised radar fit resulted in a very short reaction time, allowed track-while-scan through 360°, permitted search on the move with compensation for vehicle speed, provided excellent performance against ECM and in the clutter conditions of low-angle search/tracking, and possessed an integrated IFF capability. The system also reduced the overall height to 3.70 m (12 ft 1.67 in) with the radar antenna erected. The other major external modification was the installation of six smoke-dischargers on each side of the turret. The vehicle was designated PRTL (PantserRupsTegenLuchtdoelen, or armoured tracked anti-aircraft), by the Dutch army.

The GDP-C02 turret was also trialled in other tracked chassis, most notably the Swiss Pz 68, the British Vickers Mk 3 and Mk 7, and the Italian OTO Melara OF-40. The turret could also have been installed on the chassis of the West German Leopard 2, and considerable interest in this combination was at one time shown by Saudi Arabia. As one of the prime movers in the 5PFZ programme from its infancy, Contraves took great interest in the development of this extremely capable heavyweight battlefield air defence system, and also produced an updated version, the Contraves ATAK-35 self-propelled 35-mm twin AA gun system, matched to the anticipated battlefield threat of the 1990s. The prototype was developed on the chassis of the OTO Melara OF-40 main battle tank, so stressing the export potential of the concept, but the primary operational features of the system were matched to high-technology threats of the type that would be encountered in a European war, and the turret could be installed on tank chassis such as those of the Ml Abrams and the Leopard 1 and 2.

The armament, radar and optical tracking systems of the 5PFZ were retained in the new system, but were integrated with a new Contraves fire-control system to provide a number of tactical advantages. This was based on a Contraves digital computer and a programmable, rather than hard-wired, system logic unit. The results included markedly reduced reaction time; higher hit probability, especially against low-level manoeuvring fixed-wing and low-level rotary-wing targets; reduced crew workload; greater reliability and maintainability; and considerable growth potential. Other new features allowed the cannon to fire the new generation of Oerlikon-Bührle 35-mm ammunition, and reduced ammunition reloading time.

The same armament of two KDA dual-feed cannon was used in the Marconi Command and Control Systems Marksman 35-mm twin AA gun turret. This extremely impressive installation was developed as a private venture, and designed for installation on the chassis of many main battle tanks to provide a high degree of battlefield mobility and protection matched to the logistic infrastructure of armoured divisions. The turret weighed 24,250 lb (11000 kg), and could be located with minimal modification on the chassis of American tanks such as the M47, M48 and M60, British tanks like the Centurion, Chieftain, Challenger and Vickers Mk 3, the French AMX-30, and Soviet tanks like the T-54, T-55 and T-62.

The turret was of all-welded construction proof against 14.5-mm (0.57 in) projectiles over its frontal arc and against 7.62-mm (0.3-in) elsewhere. The commander was seated on the left and the gunner on the right, and each had a gyro-stabilised optical sight with x3 and x10 magnifications for the engagement of surface and air targets. The gunner’s sight had an integral laser rangefinder. Turret functions were achieved electrically, with reversionary manual controls for emergency use, and there was provision for the installation of a diesel-powered electrical generator in the hull so that full firing capability can be retained even with the main engine shut down. Power traverse through 360° was achieved at the rate of 90° per second for coarse slewing, and at 60° per second for tracking. The two cannon were cradle-mounted on the outer sides of the turret, and could be elevated in an arc between -10° and + 85° at the rate of 60° per second. The ammunition supply for each cannon was held in a container, so reducing reload time to between 5 and 10 minutes, and comprised 20 rounds of APDS and 230 rounds of HEI. Located above the turret rear was the antenna for the Marconi 400-series lightweight radar. This was a J-band pulse-Doppler equipment using a single antenna for surveillance and target-tracking, and was highly resistant to electronic countermeasures. In the surveillance mode the radar could detect typical targets at ranges to 13,125 yards (12000 m), data being fed to the digital fire-control system for a complete automatic engagement capability in which the gunner was required only to press the ‘Fire’ button. The turret could be fitted with full NBC protection, and was completed as standard on each side with a bank of four electrically controlled smoke-dischargers.

Armament: two 35-mm Oerlikon-Bührle KDA cannon with 340 rounds (320 AA and 20 anti-tank) per cannon, and four smoke-dischargers on each side of the hydraulically powered turret