The Battle of Timor resulted in the Japanese seizure of the island of Timor, on which the colonial powers were the Netherlands and Portugal, to the north-west of Darwin in the Australian Northern Territory. The Japanese invaded the island on 20 February 1942 and were resisted by a small Allied force. This Sparrow Force comprised for the most part Australian, British and Dutch personnel. Overcoming a brief but intense defence, the Japanese forced the surrender of the bulk of the Allied force after three days of fighting, although several hundred Australian commandos continued to wage an unconventional raiding campaign with the aid of supplies delivered by air and sea from Darwin, which lies 400 miles (645 km) across the Timor Sea. During the fighting which followed the Japanese suffered major losses, but were eventually able to contain the Australians, whose last survivors were evacuated on 10 February 1943. 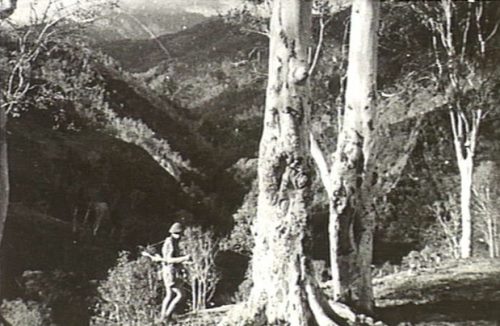 By a time late in 1941, Timor was divided between two colonial powers: the Portuguese in the east with their capital at Dili, and the Dutch in the west with their administrative centre at Kupang. There was also a Portuguese enclave at Ocussi in the Dutch area. The Dutch defence included a force of 500 troops centred on Kupang, while the Portuguese force at Dili numbered just 150. In February, the Australian and Dutch governments had agreed that should Japan entere World War II on the Axis side, Australia would provide aircraft and troops to reinforce Dutch Timor. Under Japanese pressure, Portugal opted to maintain its neutrality. As a result of the Australian/Dutch agreement, after the Japanese ‘Ai’ carrierborne air attack on Pearl Harbor in the Hawaiian islands group, the small Sparrow Force reached Kupang from Australia on 12 December 1941. Totalling about 1,400 men, Sparrow Force was initially commanded by Lieutenant Colonel William Leggatt, and included the 2/40th Battalion, the 2nd Independent Company (a commando unit) under the command of Major Alexander Spence, and a battery of coastal artillery. Sparrow Force reinforced the garrison of the Royal Netherlands East Indies Army commanded by Lieutenant Colonel Nico van Straten. The Dutch garrison included the Timor and Dependencies Garrison Battalion, one company of the 8th Battalion, one reserve infantry company, one machine gun platoon of the 13th Battalion and one battery of artillery. Air support was provided by 12 Lockheed Hudson light bombers of No. 2 Squadron, Royal Australian Air Force. Sparrow Force was first deployed in the area round Kupang and the strategically important airfield of Penfui in the island’s south-western corner, but other units were based at Klapalima, Usapa Besar and Babau, while a supply base was created farther to the east at Champlong. 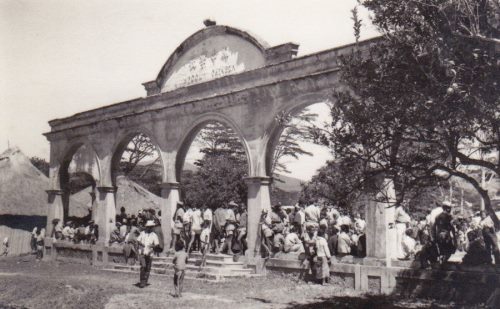 Up to this point, Portugal had refused all thought of cooperation with the Allies, preferring instead to rely on its neutrality and national plans to send an 800-strong force from Portuguese East Africa (Moçambique) to bolster the defence of the territory in the event of a Japanese invasion. This refusal left the Allied flank severely exposed, however, and a 400-man Dutch and Australian force occupied Portuguese Timor on 17 December. In response, the Portuguese Prime Minister, Dr António de Oliveira Salazar, protested to the Allied governments, while the governor of Portuguese Timor declared himself a prisoner in order to preserve the appearance of neutrality. No resistance was offered by the small Portuguese garrison, however, and the local authorities quietly cooperated, while the population itself generally welcomed the Allied force. Most of the Dutch troops and the whole of the 2/2nd Independent Company were subsequently transferred to Portuguese Timor and distributed in small detachments around the territory. The Portuguese and British governments then agreed on the withdrawal of the Allied forces from Portuguese Timor once Portugal had sent a military force to replace them. The Portuguese force departed Lourenço Marques in Moçambique on 28 January 1942, but did not arrive before the start of the Japanese invasion.

In January 1942, the Allied forces on Timor became a key link in the so-called Malay Barrier defended by the short-lived American-British-Dutch-Australian Command under the command of General Sir Archibald Wavell. More Australian support personnel reached Kupang on 12 February, these additional personnel including Brigadier William Veale, who was to command on Timor. By this time, many members of Sparrow Force, of whom most were unused to tropical conditions, had fallen victim to malaria and other diseases. The airfield at Penfui in Dutch Timor also became a key air link between Australia and US forces fighting in the Philippine islands group under General Douglas MacArthur. Japanese aircraft attacked Penfui on 26 and 30 January 1942, but the raids were hampered by the British anti-aircraft gunners and also by 11 Curtiss P-40 fighters of the US Army Air Forces’ 33rd Pursuit Squadron at Darwin. Another 500 Dutch troops and the British 79th Light Anti-Aircraft Battery later arrived to reinforce Timor, while an Australian and US force was scheduled to arrive during February.

Meanwhile, Rabaul on the island of New Britain to the North of New Guinea fell to the Japanese ‘R’ attack on 23 January, followed by Ambon between Celebes and New Guinea on 3 February, and here both Gull and Lark Forces were destroyed. Later, on 16 February, an Allied convoy carrying reinforcements and supplies to Kupang under escort of the US heavy cruiser Houston and destroyer Peary, and the Australian sloops Swan and Warrego came under Japanese air attack so heavy that it had turn back to Darwin before landing any men and supplies. The reinforcements had included the Australian 2/4th Pioneer Battalion and the US 49th Artillery Battalion. Sparrow Force could now not expect further reinforcement. and as the Japanese moved to complete their envelopment of the Netherlands East Indies, Timor would clearly be their next objective. 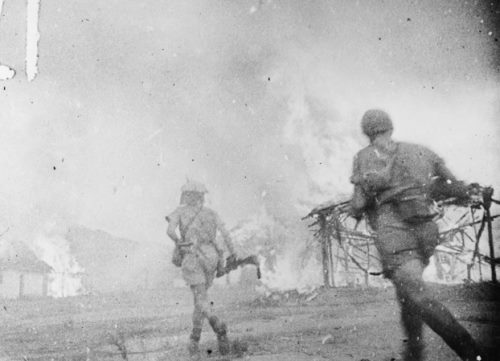 On the night of 19/20 February, 1,500 Japanese troops of the 228th Regimental Group of Lieutenant General Tadayoshi Sano’s 38th Division within Lieutenant General Hitoshi Imamura’s 16th Army, under the command of Colonel Sadashichi Doi, started to come ashore at Dili on Timor’s north-east coast. The Japanese ships had at first been assumed to be the vessels carrying the Portuguese reinforcements and the Allies were caught by surprise. Well-prepared, however, the Allied garrison started to pull back in an orderly fashion covered by the 18-strong No. 2 Section of the Australian commando stationed at the airfield, killing many of the Japanese. The commando’s No. 7 Section fared less well, though, for it drove into a Japanese roadblock. The Australians surrendered, but it is probable that all but one were killed out of hand by the Japanese. The surviving Australians, who were totally outnumbered, withdrew to the south and east into the island’s mountainous interior. van Straten and 200 Dutch East Indies troops moved to the south-west toward the border.

During this same night, the Allied forces in Dutch Timor also came under heavy air attack, which had already caused the small RAAF force to be withdrawn to Australia. After the bombing came a landing by the main body of the 228th Regimental Group , in the form of two battalions totalling some 4,000 men, on the undefended south-western side of the island at the Paha river. Five Type 94 Te-Ke tankettes, each armed with a single 6.5-mm (0.255-in) turret-mounted machine gun, were landed to provide support, and the force advanced to the north, isolating the Dutch positions in the west and falling on the position held by the 2/40th Battalion at Penfui. One company of the Japanese force drove to the north-east toward Usua with the object of cutting the line of any Allied retreat. In response the headquarters of the Sparrow Force was immediately relocated farther to the east, toward Champlong.

Leggatt ordered the destruction of the airfield, but the Allied line of retreat toward Champlong had been cut off by the dropping of about 300 Japanese naval paratroopers of the 3rd Yokosuka Special Naval Landing Force near Usua, some 14 miles (22 km) to the east of Kupang. The Sparrow Force headquarters moved farther to the east, and Leggatt’s troops launched a sustained and devastating assault on the paratroopers, culminating in a bayonet charge. By the morning of 23 February, the 2/40th Battalion had killed all but 78 of the paratroopers, but once more had been engaged from the rear by the main Japanese force. With his men running short of ammunition, exhausted, and carrying many badly wounded men, Leggatt complied when the Japanese demanded his surrender at Usua: the 2/40th Battalion had lost 84 men killed and 132 wounded. Veale and the Sparrow Force headquarters force, which included some 290 Australian and Dutch troops, continued to the east, crossed the border and linked with the 2/2nd Independent Company.