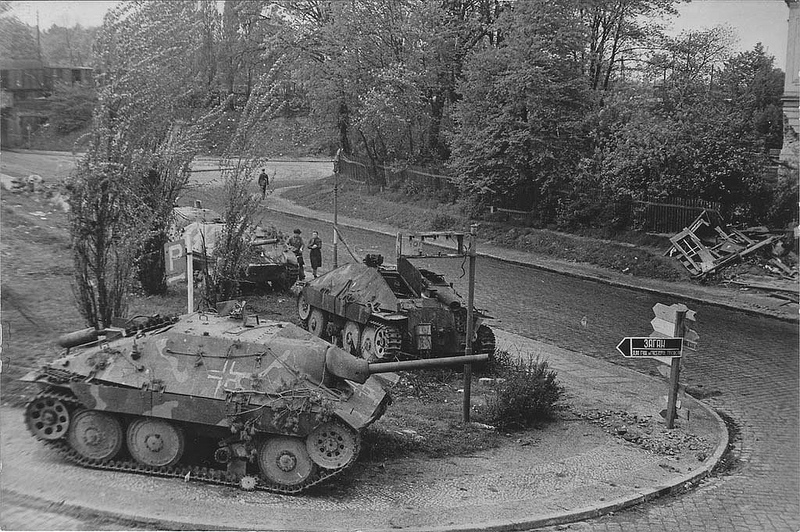 The design of any armoured fighting vehicle reflects the design team’s balancing of three primary ingredients, namely firepower, mobility and protection. In the case of the tank destroyer, protection is deliberately sacrificed to reduce weight and create a vehicle that relies for its offensive capabilities on a powerful gun, and its defensive capabilities on high performance and agility.

Whereas the US opted in its tank destroyers to reduce weight by using only thin armour in what was otherwise very similar to a tank inasmuch as it had its main armament installed in a turret, the Germans adopted a different approach and sacrificed the turret for a lower silhouette and the main armament installed in the front of a fixed superstructure in an arrangement also used for its assault guns.

The Jagdpanzer 38(t) (inventory designation SdKfz 138/2) was based on the modified chassis of a Czechoslovak vehicle, the TNHP (LT-38) tank which had been adopted as a secondary type, the PzKpfw 38(t), by the Germans after their seizure of Czechoslovakia in 1938/39. The PzKpfw 38(t) was obsolete as a gun type by 1942 and, being technically reliable and still in production, was the obvious starting point for development into other roles, of which the most important was that of the tank destroyer, a concept already tried in the Romanian Mareşal tank destroyer. In March 1943, Generaloberst Heinz Guderian the inspector of the German tank arm, called for the rapid development of a light tank destroyer with overhead protection and a low silhouette, to replace the German army’s current force of Panzerjäger (tank destroyer) vehicles, such as the Marder and Nashorn, and also towed anti-tank guns.

It was intended that the resulting Jagdpanzer 38(t) would be more cost-effective than the much larger and more ambitious Jagdpanther and Jagdtiger designs of the same period, and by using a proven chassis it avoided the mechanical problems that were delaying the development, production and introduction of the larger armoured vehicles.

The result was a tank destroyer that was mechanically reliable, small, manoeuvrable and easily concealed, and also cheap to manufacture. The Jagdpanzer 38(t) was trialled successfully in December 1943, entered production by the Böhmisch-Mährische Maschinenfabrik, Škoda from April 1944 as successor to the open-topped Marder III based on the same chassis, and entered service with the 731st Panzerjägerabteilung on the Eastern Front in July 1944. About 2,584 of the vehicles had been built by the end of the war, when production plans called for the delivery of no fewer than 1,000 such vehicles per month. While the Marder III retained the vertically sided chassis of the PzKpfw 38(t), on the Jagdpanzer 38(t) the lower hull sides were slope 15° outward to give the vehicle an approximately hexagonal cross section when viewed from front or rear. This change increased the available hull volume and made feasible the addition of a fully enclosed fighting compartment of the casemated type. 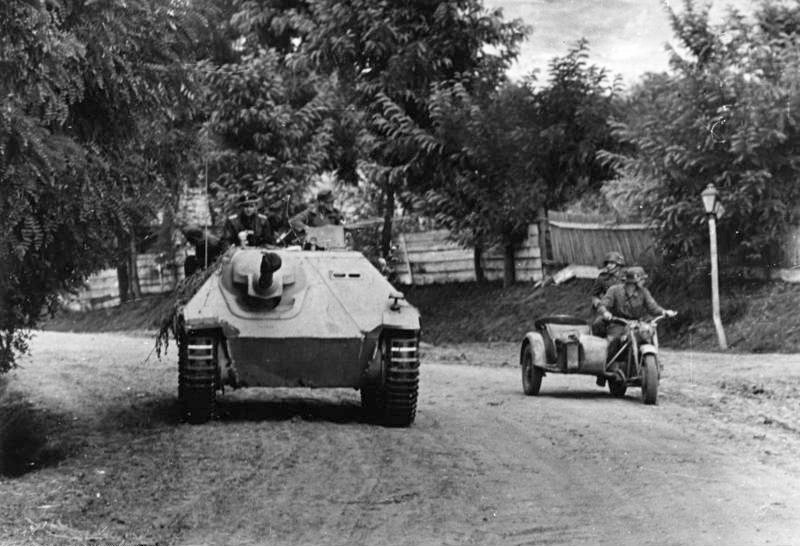 The first Jagdpanzer 38(t) vehicles had a nose-down aspect as the gun, transmission and thicker frontal armour weighed down the front, but from June 1944 production vehicles sat parallel with the ground after the introduction of strengthened leaf springs in the suspension for the four large-diameter road wheels. At much the same time access and egress were improved by the incorporation of more hatches. From August 1944 the inner and outer mantlets were lightened, which trimmed the weight by 200 kg (441 lb): the new outer mantlet was of more conical appearance than than half-cone initial mantlet. From August 1944, to speed production, new rear idler wheels were adopted, these having eight, six and four lightening holes instead of the original 12. In September 1944 the Schurtzen plates, which protected the running gear from hollow-charge warheads, had their front and rear edges bent inward to prevent them from catching on vegetation and being pulled off. Another change resulted from the discovery that the driver’s periscope housing was a shot trap, so this protrusion was removed and the periscope was instead inserted into vertical cuts in the front armour from October 1944. Other changes were a flame-reducing exhaust, the addition of a head cushion on the commander’s hatch, and riveted rather than bolted road-wheel rims.

The Jagdpanzer 38(t) equipped the Panzerjägerabteilungen (tank destroyer battalions) of German infantry divisions. Independent once more after World War II, Czechoslovakia continued to build the type (about 180 ST-I and ST-III vehicles for training) and exported 158 G-13 vehicles to Switzerland.

In World War II there were a number of other variants. The Befehlswagen 38(t) was a command type with improved radio, about 50 new vehicles were completed to the Flammpanzer 38 standard with a flame gun in place of the standard gun, 30 vehicles were built with a 150-mm (5.92-in) sIG 33/2 infantry support howitzer, and 170 vehicles were built to the Bergepanzer 38(t) standard as light recovery vehicles. Plans were made to build a number of other variants, including an assault gun version carrying the 105-mm (4.13-in) StuH 42 howitzer, a version mounting the 75-mm (2.95-in) KwK 42 L/70 gun of the Panther tank, and an anti-aircraft variant with a Flak turret.

Like some other German self-propelled guns later in World War II, the Jagdpanzer 38(t) mounted a remotely controlled machine gun mounting which could be fired from within the vehicle. This proved popular with crews, though reloading required a member of the crew to expose himself to enemy fire. In overall terms the Jagdpanzer 38(t) was very successful, but it did have a number of limitations: these included comparatively thin side armour, limited ammunition stowage, indifferent gun traverse arc, poor internal layout that made operating the vehicle difficult, and the combination of leaf springs and drive wheels that tended to fail as a result of having to carry a weight greater than had been intended.