The Heinkel He 219 Uhu (owl) was without doubt the finest night-fighter produced by Germany in the course of World War II, but despite its exceptional capabilities the type was built in only very small numbers as a result of political antipathy to the Heinkel company, which continued to develop and build the type despite orders not to do so. The origins of the type can be traced to the 1940, when Heinkel submitted to the German air ministry a proposal for a high-performance warplane of the twin-engined heavy fighter type that could readily be adapted to the torpedo and short/medium-range level bombing roles. The Reichsluftfahrtministerium (RLM. or Reich air ministry) was not impressed with Heinkel’s impressive display of private-venture enterprise, but late in 1941 began to change its mind after the increasing weight and accuracy of the Royal Air Force’s night bomber offensive on Germany began to make a real impact on German morale and war production.

The RLM at this time asked Heinkel to develop its projected multi-role warplane as a dedicated night-fighter with a two-man crew, airborne interception radar and heavy forward-firing armament. As the project was already well advanced the company was able to start detail design and prototype manufacture almost simultaneously in January 1942, but the programme received a considerable setback in March and April of that year when all the completed drawings were destroyed in RAF attacks on the Heinkel facility at Rostock. Further development was therefore entrusted to the company’s facility near Vienna. 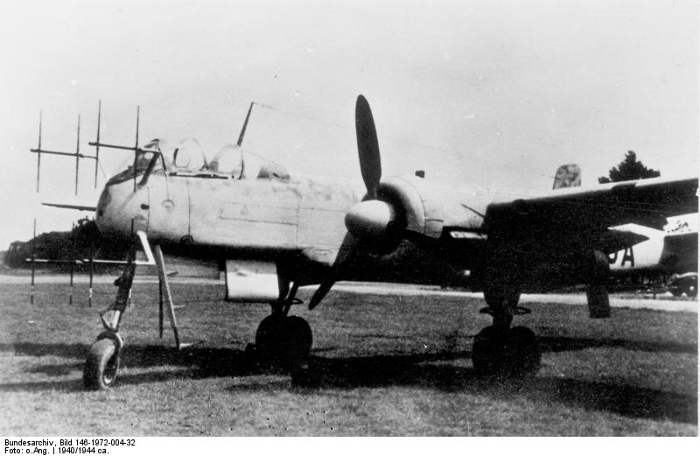 Elegant appearance
The result of this effort was an advanced warplane of very aggressive appearance and all-metal construction. The core of the structure was a slim fuselage of basically rectangular section with rounded corners, a shoulder-set cantilever wing and a tail unit whose dihedralled tailplane carried endplate vertical surfaces. The wing was based on a flat centre section of the constant-chord type with dihedralled outer panels that were tapered in thickness and chord: virtually the full span of the trailing edges was occupied by outboard ailerons and inboard flaps. The airframe was completed by the tricycle landing gear, which included a single-wheel nose unit that retracted rearward into the underside of the forward fuselage and twin-wheel main units that retracted rearward into the underside of the nacelles for the two-wing-mounted engines, which were of the inverted V-12 type each installed behind an annular radiator that gave the powerplant the look of two radial engines. The two members of the crew were located in tandem in a high-set and almost completely glazed cockpit right in the nose, and each man was seated on an ejection seat powered by compressed air. The only feature that spoiled the cleanliness of the overall design was the array of four stag’s horn radar antennae extending outward and forward from the extreme nose.

The He 219 V1, first of 10 prototypes recorded its maiden flight on 15 November 1942 with the powerplant of two Daimler-Benz DB 603A engines each rated at 1,750 hp (1305 kW) and driving a three-blade metal propeller of the constant-speed type. From the start of its flight trials and development programme, the He 219 revealed excellent performance and very good handling characteristics, and in December 1942 the type started armament trials with the comparatively light weapon fit of two 20 mm MG 151/20 fixed forward-firing cannon in a ventral tray and one 0.51 in (13 mm) MG 131 trainable rearward-firing machine gun in the rear cockpit: in February 1942 the fixed forward-firing armament became truly formidable when the two 20 mm cannon were supplanted by four 30 mm MK 108 cannon.

In March 1943 the development programme was joined by three more prototypes: the He 219 V2 had an armament of six 20 mm MG 151/20 cannon (two in the wing roots and four in the ventral tray), the He 219 V3 had a similar armament but larger vertical tail surfaces, and the He 219 V4 was fitted with FuG 202 Lichtenstein airborne interception radar. By this time an initial order for 100 aircraft, placed even before the first prototype’s maiden flight, had been increased to 300 aircraft and the development programme was further speeded by the arrival of another six prototypes.

Major initial success
Several of these were used for operational trials of the Uhu with the revised designation He 219A-0: fitted with an armament of four 30 mm MK 108 and two 20 mm MG 151/20 cannon or four 30 mm MK 103 and two 20 mm MG 151/20 cannon, the aircraft were more specifically designated He 219A-0/R1 or He 219A-0/R2 respectively. It was a machine of the latter type that opened the type’s account in a truly decisive fashion in June 1943 when in the course of a 30-minute engagement it intercepted and shot down five British bombers. Indeed, during their first six sorties, the He 219A-0 warplanes claimed the destruction of 20 British bombers, including six examples of the redoubtable de Havilland Mosquito.

As these prototype conversions were proving their worth, work had been proceeding on the first purpose-built pre-production model, the He 219A-0/R3 with the fixed forward-firing armament limited to six 20 mm MG 151/20 weapons as there were inadequate supplies of the considerably more devastating 30 mm MK 103 and MK 108 weapons. Production of this model totalled 130 aircraft including a number of aircraft that were used as pure prototypes with different powerplants and radar installations, and many others that were used for the evaluation of Rüstsätze (field conversion sets) between R1 and R6. These allowed considerable variation in the armament, and the most important of them, in the longer term, was the R6. This added in the rear fuselage, immediately to the rear of the central-fuselage fuel tanks, two 30 mm MK 108 in the so-called schräge Musik (shrill music, i.e. jazz) installation that fired obliquely forward and upward so that the He 219 could close up under the poorly protected and defended belly of the target bomber and then pour a withering fire into it without having to pull up the nose and so lose speed.

First production model
The pre-production and service test aircraft were to have paved the way for the He 219A-1 initial production model with a powerplant of two DB 603 engines fitted with the GM 1 nitrous oxide power-boost system, but this model was cancelled and the first production model was therefore the He 219A-2, of which 40 were delivered with a powerplant of two DB 603A engines: the two subvariants were the He 219A-2/R1 with an armament of two 30 mm MK 108 cannon in the schräge Musik installation and a forward-firing armament of four 20 mm MG 151/20 cannon (two in the wing roots and the other two in the ventral tray), and the He 219A-2/R2 with the 20 mm cannon in the ventral tray replaced by 30 mm MK 103 cannon.

The He 219A-3 and He 219A-4 were unrealised projects for three-man bomber and reconnaissance bomber variants.

Mosquito killer
The He 219A-6 was planned specifically for the interception and destruction of high-flying Mosquito bombers, and was produced in unknown numbers as conversions from He 219A-2/R1 standard with a powerplant of two DB 603L engines each rated at 1,750 hp (1305 kW) and fitted with the GM 1 nitrous oxide power-boost system, and no schräge Musik installation or armour. The type entered service in August 1944.

Deliveries of the true production versions of the He 219A totalled 268 aircraft, and some 20 prototypes were also pressed into service. Variants that proceeded no further than the plan or prototype stage included the He 219B-1 high-altitude model with a three-man crew, longer-span wing, lengthened fuselage and powerplant of two Jumo 222A-3/B-3 engines, the He 219B-2 lightened version with the powerplant of two DB 603L engines and an armament of only two 20 mm MG 151/20 cannon for the interception of high-flying Mosquito bombers, the He 219B-3 with heavier armament, the He 219C-1 night-fighter with a four-man crew including the operator of a remotely controlled tail barbette carrying four 0.51 in (13 mm) MG 131 trainable machine guns, and the He 219C-2 fighter-bomber version of the He 219C-1.

Unrealised development
Another development of the He 219, but one which did not reach full fruition, was the Hütter Hü 211 long-range reconnaissance and heavy night fighter whose development was ordered by the Reichsluftfahrtministerium late in 1944. Wolfgang Hütter had been a peripheral figure in the design of German aircraft in World War II as he was a specialist in the design of gliders. His glider expertise could usefully be employed in long-range aircraft for the high-altitude role, however, and Heinkel suggested his involvement in the modification of the He 219 for the long-range reconnaissance and night fighter roles. Hütter was asked to complete the design as quickly as possible, and borrowed heavily from the existing He 219, Junkers Ju 288 and Dornier Do 335. The only original parts were the flying surfaces, which were constructed of wood. The wing was of great span and resembled that of a high-performance sailplane. The cockpit was pressurised and, like that of the He 219, fitted with ejection seats. The finished product was meant to be delivered in February 1945 and to possess the capability to avoid the attentions of the de Havilland Mosquito night fighter fielded by the British. There were also plans for variants powered by turbojet engines for higher altitudes.

Accommodation: pilot and radar operator in tandem on ejection seats in the enclosed cockpit