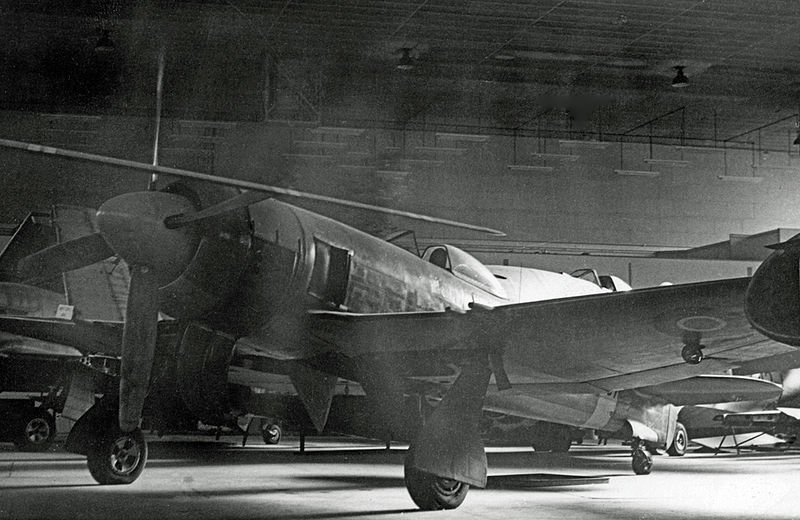 The Tempest Mk V was cleared for service use in April 1944, and in that month 50 Tempest Mk V Series 1 fighters were delivered to RAF Newchurch in Kent as the equipment of Nos 3 and 486 Squadrons, which were the constituent elements of No. 150 Wing led by Wing Commander Roland Beamont, who had earlier been instrumental in the evolution of the Typhoon as a fighter-bomber and then in the service trials of the Tempest Mk V. The wing’s third element was No. 56 Squadron, which did not receive its first Tempest Mk V fighters until July 1944. The task allocated to the first two squadrons was participation in the Allied tactical air force attacks on German communications and airfields in the period leading up to the Normandy invasion of North-West Europe on 6 June 1944, but two days after this the Tempest Mk V had its blooding in the air-to-air role, when aircraft of Nos 3 and 486 Squadrons tangled with a group of Messerschmitt Bf 109 fighters, of which they claimed four destroyed and two damaged for no loss to themselves.

Only eight days later the two squadrons were diverted to another task, namely the interception of the Fieseler Fi 103 (otherwise V-1) flying bombs with which the Germans now started to bombard south-eastern England. The Tempest’s combination of good performance and manoeuvrability at low altitude made it ideal for this task: on their first day of operations against the V-1, Tempest fighters destroyed eight V-1 flying bombs, and as they gained experience the squadrons steadily improved their success rate. Another four Tempest squadrons were committed to the effort as they re-equipped, although the pace of such re-equipment was slowed by strike action in the Hawker plant, and by the end of the Germans’ main V-1 offensive in September 1944 the six squadrons had accounted for 638 of the 1,771 V-1 flying bombs destroyed by the RAF.

At this time one unit, No. 501 Squadron, was kept in the UK to continue operations against the limited numbers of V-1 flying bombs still being launched, but the other five were transferred to European airfields from August 1944. The first two units to be moved were Nos 80 and 274 Squadrons that, together with a Spitfire unit, constituted No. 122 Wing. No. 150 Wing’s three squadrons moved in September to operate from airfields in Belgium and the Netherlands. The Tempest units were part of the 2nd Tactical Air Force, which was bolstered before the end of the war by two more Tempest units, Nos 33 and 222 Squadrons. During the period between August 1944 and May 1945, the European-based Tempest squadrons were highly successful in both of their main tasks, namely ground-attack work in support of the advancing Allied land forces and, when opposition was available, air combat against Germany’s rapidly declining air capability. The Tempest even proved successful against the Messerschmitt Me 262 turbojet-powered fighter, the pilots of No. 122 Wing claiming eight destroyed and 15 damaged.

The Tempest Mk V was, in the event, the only version of the fighter to see operational service in World War II. As this conflict reached its closing stages, the Tempest Mk V was operational with eight units in the form of No. 501 Squadron in the UK and Nos 3, 33, 56, 80, 222, 274 and 486 Squadron in Europe. No. 501 Squadron was disbanded in April 1945, and of the seven other squadrons then grouped in Germany as part of the British commitment to the occupation forces, the only two that survived to 1948 – when the Tempest Mk V was withdrawn from service – were Nos 3 and 80 Squadrons.

As the Tempest Mk V was entering production and service, Hawker was pressing ahead with the development of improved models, most especially the Tempest Mk II with the powerplant of one Centaurus radial engine. In September 1942, the month that the Tempest Mk V prototype first flew, the Ministry of Aircraft Production placed an order with Gloster (like Hawker a member of the Hawker Siddeley Group) for 500 examples of the Tempest Mk II. It was nine months before the first of the two Tempest Mk II prototypes recorded its maiden flight on 28 June 1943 with the powerplant of one rigidly mounted Centaurus IV engine and the standard Typhoon-type tail unit, although the newer one-piece sliding canopy was fitted. The rigid engine mounting proved problematical, and a five-blade Rotol propeller replaced the original four-blade unit for a time, while the use of a less-rigid six-point engine mounting was considered. The second prototype made its maiden flight on 18 September 1943, and was flown mainly for powerplant development, in its career flying with the Centaurus IV, V, XII, XV and XVIII engines.

Gloster was preoccupied at this time with development and production of its own Meteor, which was the first and only Allied fighter of the turbojet-powered type to enter service in World War II, so production of the Tempest Mk II was transferred, by a decision of August 1943, to Bristol and the number specified was increased to 600, later supplemented by a further 30. The first of these Tempest Mk II fighters off the production line made its maiden flight at the airfield beside Bristol’s Filton plant on 4 October 1944 with a tail unit similar to that of the Tempest Mk V, short-barrelled Hispano V cannon, and the powerplant of one Centaurus V radial engine rated at 2,590 hp (1931 kW) for take-off, 2,530 hp (1886.5 kW) at 1,000 ft (305 m) and 2,225 hp (1659 kW) at 11,000 ft (3355 m), and driving a four-blade Rotol propeller of the constant-speed type with a diameter of 12 ft 9 in (3.89 m).

In the event Bristol completed only 50 airframes including 20 sets of components for assembly by Hawker. The parent company itself had meanwhile received contracts for a total of 900 Tempest Mk II fighters and completed 402 (in addition to the 20 assembled from Bristol components) to make a Tempest Mk II total of 452. The last 300 or so of these aircraft were delivered after the end of World War II to a fighter-bomber standard with underwing hardpoints for bombs or rockets.

The Tempest Mk II entered service toward the end of 1945, when No. 54 Squadron became the first unit equipped with the improved fighter. Nos 54 and 247 Squadrons operated the Tempest Mk II only in the UK, but the mark saw more extensive service overseas, in Germany and the Far East. In the course of 1946, Nos 16 and 33 Squadrons in Germany traded in their mix of Tempest Mk V and Mk VI fighters for Tempest Mk II machines, and were supplemented by No. 26 Squadron that had just transitioned to the mark. Operational use of the Tempest Mk II in Germany continued briefly after the establishment in that occupied country of the 2nd Tactical Air Force, and ended in 1949 when No. 33 Squadron flew out to Hong Kong as part of the Far East Air Force. Transferring to Malaya, the squadron flew its Tempest Mk II warplanes on anti-terrorist missions, primarily with air-to-ground rockets, until 1951, being the last RAF unit to fly the Tempest operationally. 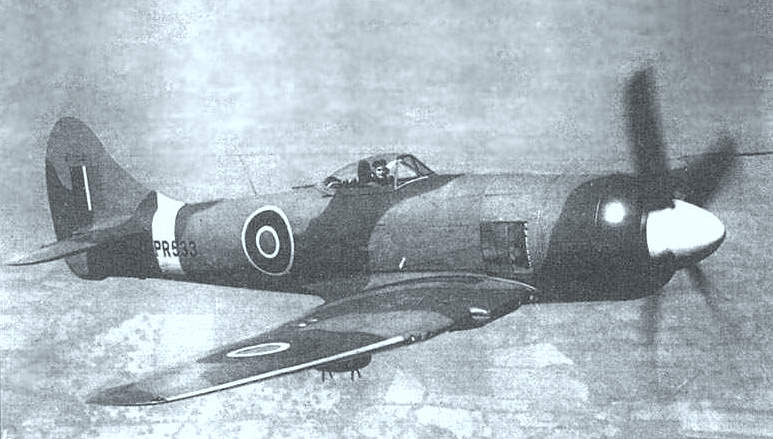 Meanwhile, four RAF squadrons had been allocated the Tempest Mk II for service in India: these units were Nos 5, 20, 30 and 152 Squadrons. With the exception of the last-mentioned, which was No. 136 Squadron renumbered, these had been operating in Burma in the final stages of the war against Japan and transitioned to the Tempest Mk II after returning to India, but all had been disbanded or transferred to the UK by the late summer of 1947.

The third and final development of the Tempest was the Tempest Mk VI, but this too arrived too late to see operational service in World War II. The Tempest Mk VI was a sub-variant of the Tempest Mk V featuring an uprated powerplant in the form of the Sabre V engine rated at 2,340 hp (1752 kW). Such an engine was first installed in the Tempest Mk V prototype, in which it first flew on 9 May 1944, and the installation could be distinguished by the inlets in the leading edges of the wing: a small inlet on each side supplied air to the carburettor, while a larger inlet in the starboard wing served the oil cooler, which was relocated in the wing from the centre of the nose radiator because the whole area of the latter was required for cooling the higher-powered Sabre V. A similar arrangement of carburettor air and oil cooler inlets had already been adopted in the Tempest Mk II.

Of the total of 1,149 Sabre-engined Tempest fighter contracted from Hawker, the last 300 were specified to the Mk VI standard, but only 142 of these were completed and the outstanding balance of 158 was cancelled at the end of World War II. Before the start of production deliveries, two Tempest Mk V fighters were adapted in 1945 to the Tempest Mk VI standard for service trials.

In its production form the Sabre V installation in the Tempest Mk VI was little different from that of the Tempest V, but Napier planned a more radical installation in the form of an annular radiator not dissimilar to that adopted for the Focke-Wulf Fw 190D that had a Junkers Juno 213 liquid-cooled V-12 engine in place of the earlier models’ air-cooled BMW 801 air-cooled 14-cylinder radial engine. Two Tempest Mk V machines were flown with this type of radiator installation, the second later being tested with a ducted spinner, bringing the air inlet forward of rather than behind the propeller blades. The experiments provided a basis for the later design of intakes for Napier turboprop engines but were not found to offer any advantages for the Tempest itself; they were also the only major modifications flown on Tempest aircraft during World War II.

Tempest operations in the RAF came to an end in 1953, the last aircraft in service being about 30 Tempest Mk V and Tempest Mk VI machines adapted for target towing at the RAF Armament Training Station located on the island of Sylt off the north German coast. For this purpose, the aircraft carried under the port wing an ML pod from which a target could be streamed and, by means of a slipstream driven winch, recovered; targets could alternatively be snatched on take-off using a static tow line.

Shortly after the end of World War II, however, Hawker conducted an experiment on a late-production example of the Tempest Mk V fitted with a long-barrelled 40 mm Type ‘P’ cannon with 38 rounds under each half of the wing. First flown on 19 October 1945, this was a considerably more effective ground-attack and anti-tank warplane than the similarly armed Hurricane Mk IID, but the type received no production order.

During 1946 the Tempest was selected as the equipment for fighter squadrons of the Royal Indian Air Force. Sufficient examples of the Tempest Mk II were supplied from RAF stocks to equip first Nos 3 and 10 Squadrons, and then Nos 1, 4, 7, 8 and 9 Squadrons. These machines were supplemented by 89 ordered from Hawker, which supplied machines refurbished after service with the RAF. It is not certain, therefore, exactly how many Tempest Mk II fighters were delivered to the Royal Indian Air Force which, like the rest of the viceroyalty’s armed forces, were partitioned in August 1947 as India became independent and was divided into India and Pakistan. Nos 1 and 9 Squadrons were allocated to the newly created Royal Pakistan Air Force, which designated them as Nos 1 and 9 Squadrons. Pakistan then contracted with Hawker for a further 24 Tempest Mk II fighters, delivered as refurbished ex-RAF aircraft, and these were used to create No. 14 Squadron.

The Tempest Mk II fighters in Indian and Pakistani service saw action against each other in 1947, and while India retired its surviving aircraft in 1953, Pakistan kept its machines operational to 1954, a year in which the Tempest Mk II saw its final operational service against dissident tribesmen on the North-West Frontier.