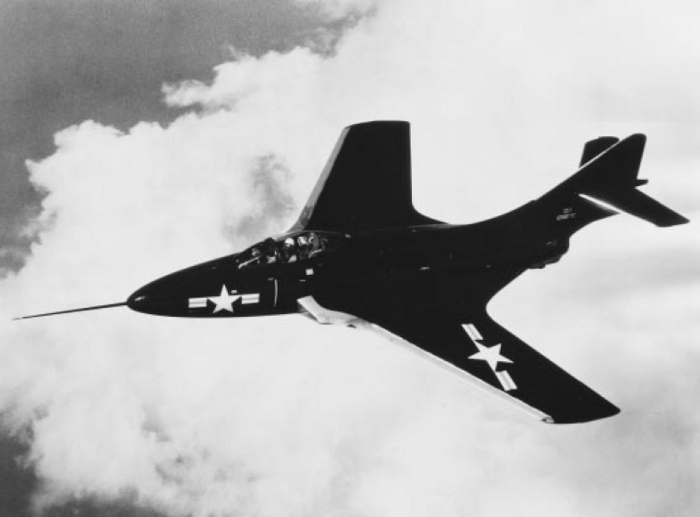 Genesis
Even as they discussed the G-79 design concept in the second half of 1946, paving the way for the F9F Panther series of carrierborne fighters, the US Navy and Grumman were aware that the best short-term solution to the achievement of higher subsonic speeds was the adoption of swept flying surfaces. The important thing with the straight-winged G-79 design, however, was its low technical risk and thus the promise of its early service debut as an effective turbojet-powered fighter. In October 1946, however, the contract for the XF9F-2 Panther prototypes included a clause requiring Grumman to provide design data for a swept-wing version of the new fighter. The major problem faced by the design team was not so much the combination of basic aerodynamic and structural factors associated with a swept wing, but rather the way in which the swept wing’s high-speed performance could be combined with the low stalling speed and adequate low-speed handling characteristics required for carrier compatibility.

Grumman’s initial answer was a variable-geometry wing planform, and this led to the development of the G-83 design that paved the way for the Grumman XF10F Jaguar whose development was ordered in December 1947. Three years later, though, the rough handling being suffered by straight-winged US Navy fighters at the hands of Mikoyan-Guryevich MiG-15 ‘Fagot’ swept-wing fighters during the Korean War (1950/53) led to a renewed call for the rapid development and production of a swept-wing derivative of the F9F Panther.

Development
In March 1951, therefore, the US Navy contracted for the conversion of three F9F-5 fighters to the new G-93 swept-wing configuration. This retained the fuselage, vertical tail surface, landing gear and powerplant of the F9F-5 in combination with a new wing and horizontal tail surface each characterised by a quarter-chord sweep angle of 35º. The main problem was still the higher approach and landing speeds of the swept wing, and mitigation of this problem was obtained by extending the chord of the leading-edge slats and trailing-edge flaps, and also by adding much larger split flaps under the centre section. Other changes were a lengthening of the forward fuselage by 2 ft 0 in (0.61 m), the forward extension of the wing centre section in the portion accommodating the wing-root air inlets, enlargement of the wing root fillets to blend the wing roots into the rear fuselage, and a broader-chord lower rudder section. As the Panther’s tip tanks were no longer possible on the swept wing, the forward fuselage tank was made larger and bladder tanks were installed in the wing’s leading edges, but even so internal fuel capacity was decreased by almost 8.4%.

The first of three XF9F-6 Cougar prototypes, which included one static test airframe, recorded its maiden flight on 20 September 1951, and while this upgraded type revealed much improved flight performance and carrier compatibility than the F9F-5, it also demonstrated poor controllability that was rectified only by the adoption of a hydraulically powered all-flying tailplane and the replacement of the horn-balanced ailerons by upper-surface spoilers of the ‘flaperon/flaperette’ type. The two flying prototypes retained the F9F-5’s powerplant of one Pratt & Whitney J48-P-6 centrifugal-flow turbojet engine rated at 6,250 lb st (27.80 kN) dry and 7,000 lb st (31.14 kN) with water injection, but the production model introduced the J48-P-6A engine that offered 7,000 lb st (31.14 kN) without any need for water injection. This engine was used only for the first 30 F9F-6 Cougar fighters, the balance of 666 aircraft (including the last 50 aircraft from the F9F-7 order delivered to F9F-6 standard) being powered by the J48-P-8 engine rated at 7,250 lb st (32.25 kN).

Service models
To differentiate it from the straight-winged Panther, the swept-wing series received the name Cougar, and the new type entered full service from November 1952 after a remarkably short design and development history. Aircraft that survived to the 1962 rationalisation of the US tri-service designation systems received the revised designation F-9E Cougar.

Delivered between June 1954 and March 1955, the 60 F9F-6P Cougar machines were unarmed photo-reconnaissance aircraft with a revised nose accommodating a camera installation (one K-17 and one trimetrogon unit) for vertical and oblique photography. The two aircraft converted as drone directors had the designation F9F-6PD Cougar.

The F9F-7 Cougar was the Allison-powered counterpart to the F9F-6, and orders were placed for 168 aircraft to a standard that differed from that of the F9F-6 only in its powerplant of one Allison J33-A-16 centrifugal-flow turbojet engine rated at 6,350 lb st (31.34 kN) dry. The engine lacked the power of the J48-P-8, and the last 50 aircraft of the F9F-7 order were therefore completed to F9F-6 standard with the J48-P-8 engine. Aircraft which survived to 1962 received the revised designation F-9H Cougar.

Despite its many advantages over the Panther series, the Cougar could still benefit from improvement, and in April 1953 Grumman started work on the G-99 as a development of the G-93 providing reduced stalling speed, improved control at high angles of attack, and greater range. The changes involved an extension of the central fuselage by 8 in (0.203 m), enlargement of the forward fuselage tank and the installation of new tankage in the extended outer wings for an additional 140 US gal (116.6 Imp gal; 530 litres) of fuel, the replacement of the leading-edge slats outboard of the fences by extended and cambered leading edges, and the rearward extension of the trailing edges. The net effect of the wing changes was an increase in area and a reduction in thickness/chord ratio for a lower wing loading but higher critical Mach number. The US Navy was impressed with the potential of the G-99 and ordered the type as the F9F-8 Cougar. The first of an eventual 601 such aircraft flew on 18 January 1954 for delivery in April of the same year at the start of a programme that saw the delivery of the last machine in March 1957. The F9F-8 was powered by the J48-P-8A or -8C engine rated at 7,250 lb st (32.25 kN) dry, had a reinforced sliding canopy, in common with most other F9F variants was retrofitted with a UHF homing antennae in a substantial undernose radome, and part way through the programme was delivered with a nose-mounted inflight-refuelling probe and provision under the wing for two AAM-N-7 (from 1962 AIM-9) Sidewinder short-range AAMs. The Sidewinder capability was applied to earlier F9F-8 warplanes, and aircraft that survived to 1962 received the revised designation F-9J Cougar.

Nuclear-armed model
After the US Navy had adopted tactical nuclear weapons as standard carrierborne stores, one of several types adapted for the carriage of such weapons was the F9F-8B Cougar version of the F9F-8 with changes that included additional instrumentation, the control and arming system for the nuclear weapon, and the LABS (Low-Altitude Bombing System) for the toss-bomb delivery of the nuclear weapon. In reality, most squadrons equipped with the F9F-8B (from 1962 AF-9J Cougar) were operated in the conventional fighter-bomber role with drop loads (generally four 1,000 lb/454 kg free-fall bombs or 5 in/127 mm HVAR air-to-surface unguided rockets) on six underwing hardpoints, of which the inboard pair was generally reserved for drop tanks although HVAR rockets were sometimes carried.

Some of the aircraft were later revised as TAJ-9F Cougar advanced trainers.

The F9F-8P Cougar was the photo-reconnaissance version of the F9F-8, and the first such machine flew in February 1955, its successful trials paving the way for production of 110 aircraft delivered between August 1955 and July 1957. The type was somewhat different from the earlier photo-reconnaissance versions of the Panther and Cougar as it had a longer, drooped and flat-sided nose carrying forward, vertical and oblique cameras as well as featuring capability for an inflight-refuelling probe.

Trainer model
Anticipating naval demand for a two-seat combat and conversion trainer derivative of its G-99 design, Grumman started work on such a type as the G-105 as early as November 1953. Grumman’s first approaches to the US Navy were rebuffed as the service anticipated that the Lockheed T2V-1 would meet its needs as a carrier-compatible advanced trainer, but the company was later authorised to complete one F9F-8 to G-105 standard with tandem seating in a lengthened cockpit under a long but very low-drag canopy. The new cockpit demanded that the forward fuselage be stretched by 2 ft 10 in (0.864 m), and to offset the weight of all the additional equipment the nose-mounted armament was reduced from four to two 20 mm cannon with a reduced ammunition load.

The Cougar fighters were phased out of service with first-line squadrons in 1959, and the Cougar photo-reconnaissance aircraft followed by February 1960. The Cougar two-seat machines enjoyed a longer career, and the last aircraft were not retired from US Navy service until February 1974, when the last aircraft were retired from the VT-4 squadron. The only version of the Cougar to see combat was the TF-9J trainer. Four such aircraft of the H&MS-13 squadron were used in the airborne command role, directing air attacks against communist positions in South Vietnam during 1966 and 1967. The TF-9J had a long service with US Navy, but a proposed Cougar development with the Pratt & Whitney J52 axial-flow engine was not preferred as the US Navy selected the Douglas TA-4F Skyhawk two-seat trainer development of the A-4 attack bomber.

The only foreign operator of the Cougar was the air arm of the Argentine navy, which used larger numbers of the F9F Panther. The service acquired two F9F-8T trainers in 1962, and these served until 1971. After several failed attempts, the Argentine navy managed to get the two airframes delivered by taking advantage of a bureaucracy designation mistake, but the UDA refused to deliver spare parts in the following years.

Fixed armament: four 20 mm M3 fixed forward-firing cannon with 190 rounds per gun in the underside of the nose

One reply on “Classic US Fighters – The Grumman F9F Cougar”