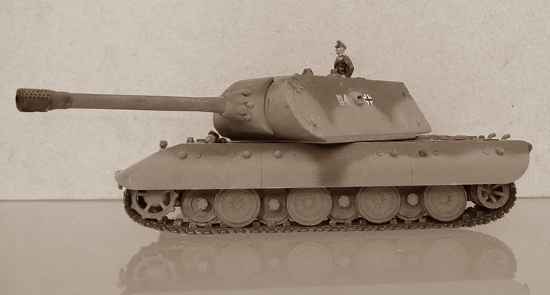 Another example of the penchant of the Nazi hierarchy for the desirability of the massive, the Panzerkampfwagen E-100 (Gerät 383) was a super-heavy tank design which was conceived and developed in the second half of World War II.

The concept behind this and other massive weapon types of the same period due to the belief held by the Nazi leadership that the ‘Asiatic hordes’ of the numerically superior USSR could be defeated by exploiting the qualitative advantage which would emerge from German scientific and technological superiority. The basic design of the PzKpfw E-100 was ordered by the Waffenamt as a development parallel with that of the Porsche ‘Maus’ in June 1943, the month before the start of Germany’s ‘Zitadelle’ offensive on the Eastern Front: this Battle of Kursk was a German defeat of strategic significance, and with their defeat in this classic armoured battle the Germans permanently lost the initiative on the Eastern Front. The E-100 was the heaviest of the Entwicklung (development) series of vehicles in which as many components and assemblies as possible were standardised to. In its entirety, the series was to have comprised E-5, E-10, E-25, E-50, E-75 and finally E-100 models.

In November 1942, Krupp had proposed a super-heavy tank design turning the scales at some 155 tons, compared with the 188 tons of the ‘Maus’, but using the turret and main armament of the ‘Maus’. One month later, Krupp proposed a ‘Tiger-Maus’ design weighing 130 tons and making use of many of the same components as the Tiger tank but fitted with the turret of the ‘Maus’. The reduction in weight was to be derived from the use of thinner armour, and the narrowing and shortening of the vehicle.

In 1944 Adolf Hitler ordered an end to the  development of super-heavy tanks, although work on the E-100 was allowed to continue at a very low priority: for example, only three Adler employees were made available to assemble the prototype.

The E-100 prototype had a 23.1-litre Maybach HL 230P30 water-cooled V-12 engine driving an Olvar transmission. This 700-hp (522-kW) engine was also fitted in the lighter Panther battle and Tiger II heavy tanks, and while it was suitable for the 45-ton Panther and was lacking in adequate power for the 70-ton Tiger II, it was wholly inadequate in power terms for a 140-tonne design. The chassis of the E-100 prototype was virtually completed at the end of World War II, but lacked its turret, which was to have carried one 150-mm (5.91-in) KwK 44 L/38 gun. The definitive version of the E-100 was to have been powered by an 850-hp (634-kW) HL 234 driving a Mekydro transmission, and its turret was to have carried a 173-mm (6.81-in) KwK 44 which was proposed as the final armament. The co-axial armament was to have been a 75-mm (2.95-in) KwK 44 L/36.5 gun, and there was also to have been a 7.92-mm (0.312-in) MG 34 machine gun. The suspension was to have been of the externally mounted Belleville washer coil-spring type. Key design features of the hull were well sloped armour typical of German tank design thinking after 1943: the E-100’s minimum and maximum armour thickness’s were 60 and 240 mm (2.36 and 9.45 in). The eight road wheels on each side were overlapped in an arrangement similar to that of the Panther and Tiger II tanks, and no longer interleaved as with the suspension of the Tiger I; the track return runs were covered by skirt armour, the drive sprockets were at the rear, and the idlers were at the front.

The first prototype was not completed, and was found by Allied forces on the factory floor in 1945. The partially completed vehicle was removed by the British army for evaluation and then scrapped. 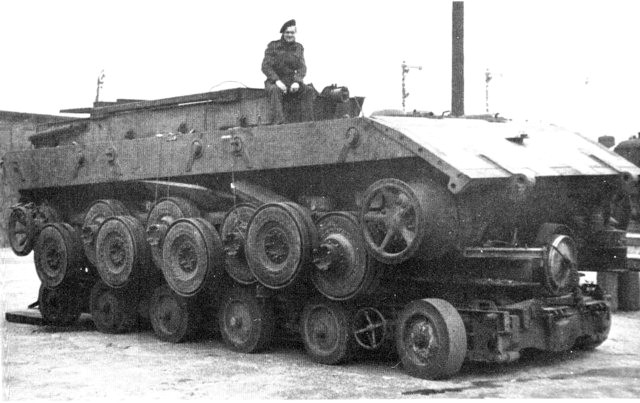