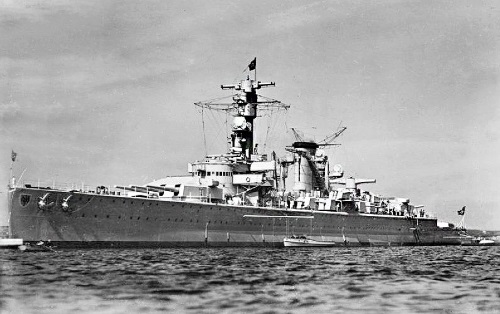 The ‘P’ class was planned as a group of no fewer than 12 heavy cruisers to succeed the three ‘Deutschland’ class cruisers, known to the British as pocket battleships, in the long-endurance commerce raiding role. Work on the type began in 1937 and continued until 1939, and in this time no fewer than nine designs were considered. The final design was was for a type to be armed with six 11-in (280-mm) fast-firing guns in two triple turrets, as in the preceding ‘Deutschland class. In the German nomenclature of the time, the ships were designated as Panzerschiffe (armoured ships), and given the preliminary names P1 to P12. The core design was in essence an improved version of that developed for the preceding ‘D’ class cruisers, which had been cancelled in 1934. Although the ships were assigned to yards, construction never started as the design was superseded by that of the ‘O’ class battlecruiser.

During the early 1930s, Adolf Hitler launched a major rearmament effort in Germany while also signing the Anglo-German Naval Agreement of June 1935, which allowed Germany to enlarge its navy to 35% of the strength of the Royal Navy, and thereby effectively overcame the strictures imposed of the German navy by the Treaty of Versailles in 1919.

“The original programme from 1933 onwards is still framed within the fairly conventional parameters of German armaments thinking in the 1920s. So they have a staggered programme under which the first phase is to build a defensive fighting force, and they set a timeframe of about four years for that, and then in the second phase they want to build defensive capacity which then, over the course of 1933-34, gets defined as Panzer divisions. These are then incorporated into the armaments build up programme.”

This led to a decision, taken in 1937, to construct ships of an improved ‘Deutschland’ class type. This led, in the same year, to the start of work on the new type. After consideration of many basic designs, that selected for full development was the ‘P’ class with a 19,685-ton displacement, maximum speed of 34 to 35 kt, and armament of six 11-in (280-mm) guns in a pair of triple turrets.

By 1938 it had become clear to Admiral Erich Raeder, commander-in-chief of the German navy, that the aggressive nature of Hitler’s foreign policy would inevitably bring Germany into conflict with the UK, and accordingly came to the conclusion that a significantly larger force of armoured ships would be necessary to undertake a successful commerce-raiding campaign against the British merchant marine. Raeder’s intention to fight a commerce war against the UK lay at the heart of the ‘Z-Plan’ finalised early in 1939, and which included 12 ‘P’ class ships. The design work on the new ships was undertaken in parallel with that on the planned ‘O’ class battlecruiser. Experiments were conducted on at least nine different design proposals between March 1938 and December 1939, and these proposals varied somewhat in terms of dimensions as well as armament, and some of the designs featured nine 11-in (280-mm) guns in three triple turrets. 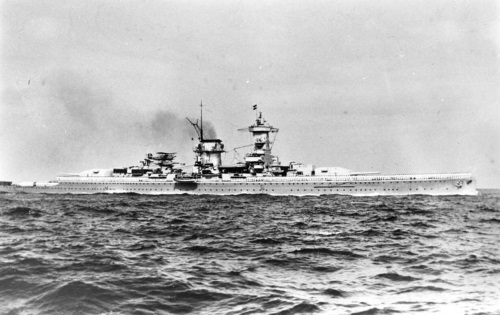 The design team had to overcome many problems in the design of these ships, the most taxing of them pertained to the armour protection. The required maximum speed of 34 kt meant that the minimum length had to be increased from 711 ft 11 in (217.0 m) to 752 ft 11 in (229.5 m). It also meant that the beam could be a minimum of 82 ft 0 in (25.0 m) unless a Diesel propulsion arrangement, like that of the ‘Deutschland’ class ships, was desired: this would add 6 ft 7 in (2.0 m) to the beam. Unfortunately for the designers,, the widening of the beam meant that a still longer hull was needed to maintain hydrodynamic efficiency by the provision of the designed length/beam ratio. All of this complicated the protection arrangements, as more armour was needed to cover the longer length and widened beam. Eventually it was deemed impossible to include a Diesel propulsion arrangement on the 19,685-ton displacement.

Initially, 12 ships of the ‘P’ class were ordered from a number of German yards including Deutsche Werke in Kiel, Blohm & Voss in Hamburg, and the KM yard in Wilhelmshaven. However, the ‘Z Plan’ was then trimmed in ambition and the number of Panzerschiffe was reduced to eight. This caused several of the contracts to be redeployed among the various yards, and the keel of P1 was to be laid on 1 February 1940. The revised version of the ‘Z Plan’, approved on 27 July 1939, then removed the ‘P’ class ships from the construction queue, and instead it was decided to build only the ‘O’ class battlecruisers. 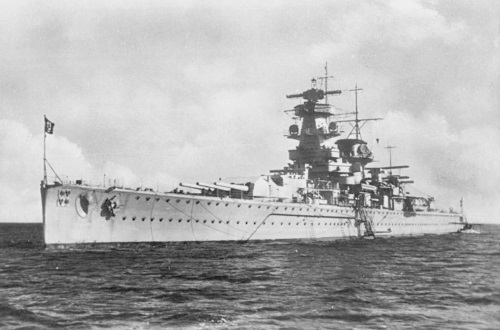 The Main armament was to have been six 11-in (280-mm) guns in two triple turrets, one fore and one aft, but it is not known whether these guns were to have been the same SK C/28 guns as carried by the ‘Deutschland’ class ships. The armament scheme also included four 5.91-in (150-mm) guns in two twin turrets, also mounted on the centreline fore and aft. The forward 11-in (28-mm) turret was to have been superfiring over the forward 5.91-in (150-mm) turret, and this arrangement was to have been reversed for the after pair of turrets. The 5.91-in (150-mm) twin turrets were Drh L. C/34 mounts of the type also used in the ‘Bismarck’ class battleships and ‘Scharnhorst’ class battlecruisers. The turrets provided an elevation arc between -10° and +40°; the latter providing a maximum range of 24,060 yards (22000 m).

The proposed anti-aircraft armament was decidedly light: four 4.13-in (105-mm) and four 37-mm guns. Each ships was also to have been fitted with six 21-in (533-mm) submerged torpedo tubes.