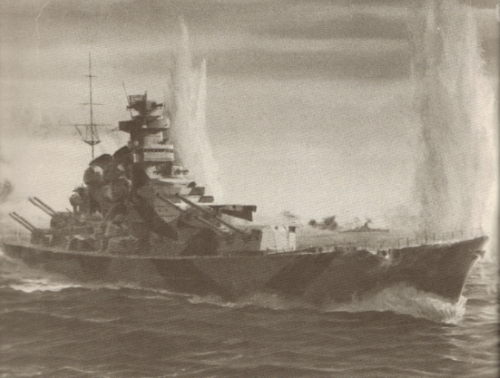 As a result of the outbreak of World War II in September 1939, however, none of the ships were built, and only first two ‘H-39’ class ships were even laid down, on 15 July and 1 September 1939 at the Hamburg yard of Blohm und Voss and Bremen yard of Deschimag (A. G. Weser) respectively. The little work which had been completed by that time was then brought to a halt, and the incomplete keel structures remained on their slips until November 1941, when the Oberkommando der Marine ordered diversion to other purposes. Contracts for the other four ‘H-39’ class ships had been awarded, but no work on them had been undertaken before they were cancelled.

The earliest design studies for the Schlachtschiff ‘H’ (battleship ‘H’) were undertaken in 1935, and were near-repeats of the early designs for the ‘Bismarck’ class ships, armed with 13.78-in (350-mm)  guns. Then intelligence reports that the Soviets were planning the ‘Sovetsky Soyuz’ class with 14.96-in (380-mm) guns prompted the Germans to increase the calibre of the main armament to the same calibre on 5 October 1936. At the end of this month, the Oberkommando der Marine issued a requirement for a 35,000-ton ship armed with eight 380-mm guns, capable of 30 kt and possessing a radius of action at least equal that of the ‘Deutschland’ class pocket battleships.

Work on the design which was designated as the ‘H-39’ class began in 1937. The design team were ordered to create a new battleship altogether superior to that of the ‘Bismarck’ class and with a larger-calibre main armament to match that of any battleship built by a potential adversary. It appeared that Japan would not ratify the 2nd London Naval Treaty, which would permit the treaty’s signatories to increase main armament calibre to 16 in (406 mm) and, as a result of the Anglo-German Naval Agreement of 1935, Germany was considered to be party to the other international naval arms limitation treaties. Japan refused to sign the 2nd London Naval Treaty in April 1937, and soon after this the US Navy announced that it planned to arm its new ‘North Carolina’ class battleships with 16-in guns.

Hitler demanded guns larger in calibre than those of any possible adversary, but guns of such a calibre would required displacements of more than 80,000 tons and drafts too great to allow the ships to use Germany’s ports unless these latter be significantly dredged. Admiral Werner Fuchs, responsible for the OKM staff section in the OKM was tasked with fixing the operating requirements for the ship. He managed to persuade Hitler that the 16-in gun was the right for the ‘H-39’ design. In 1938 the OKM developed the ‘Plan Z’ programme of construction, and in this, six ‘H-39’ class battleships constituted the core.

Jack, a historian and author at War History Online, states:

“In 1938 Hitler decided to build a fleet capable of challenging the Royal Navy, in the event of war with Great Britain. He asked the Kriegsmarine to provide plans for such a fleet. Subsequently, it was decided to embark on a large-scale re-building of the German Navy.”

Only four German yards possessed slip large enough to build the new battleships. The OKM issued orders for construction of the first two ships as ‘H’ and ‘J’ on 14 April 1939. The contracts for the other four ships (‘K’, ‘L’, ‘M’ and ‘N’) were issued on 25 May. The ships received no names, and no official name proposals were made. 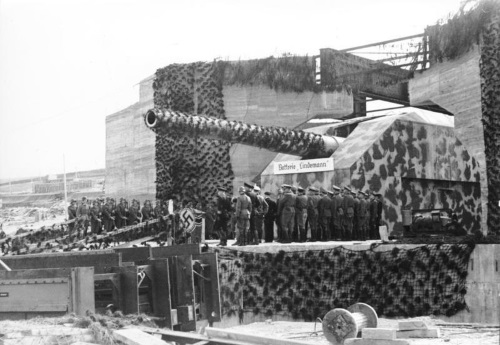 The tertiary armament was to comprise 16 4.13-in (105-mm) SK C/33 Flak guns in twin mountings for long-range defence against aircraft. Unlike those mounted on the ‘Bismarck’ class battleships and ‘Scharnhorst’ class battle-cruisers, these guns were to be in armoured mountings to provide their crews with protection against shell fragments, debris and strafing attacks. The new turrets also provided faster rates of training and elevation than the earlier open mountings. Close-range air defence was the task of a battery of 16 37-mm SK C/33 and 24 20-mm SK C/38 cannon. The 37-mm weapons were to be located in eight twin mounting, and the 20-mm cannon in six Flakvierling quadruple mountings. The 37-mm cannon were closely grouped amidships and shared one ammunition hoist.

The design also included six 533-mm (21-in) torpedo tubes, all submerged in the bow and angled off the centreline by 10°. 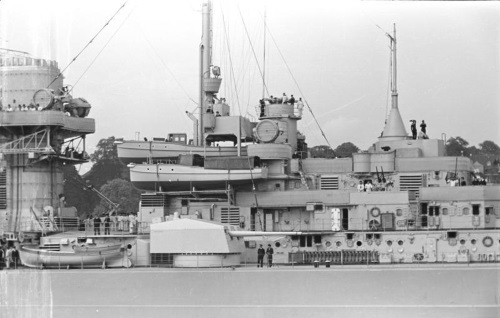 The designers envisaged that the ‘H-39’ class ships would engage in combat at comparatively short ranges, and therefore opted for a basic armour scheme of the type which had been used on German battleships since the ‘Nassau’ class dreadnought battleships of 1907. The main belt was vertical and attached directly to the side of the hull, and was of KCA (Krupp cemented steel armour) 11.8 in (300 mm) thick over its central section covering the ammunition magazines and machinery spaces, declining to 8.66 in (220 mm) thick fore and aft of this; the bow and stern had no main-belt protection. The upper side belt was 5.71 in (145 mm) thick. It has been estimated that the main belt would have provided protection against 16-in projectiles from ranges between 12,030 and 22,965 yards (11000 and 21000 m), but that the upper belt could have been penetrated by 16-in projectiles at any range, which would have left the ships vulnerable above the waterline.

The underwater protection was essentially similar to that of the ‘Bismarck’ class. A 1.77-in (45-mm) torpedo bulkhead of Wotan Weich steel backed the side armour and provided protection against underwater weapons. The bulkhead was placed some 18 ft (5.5 m) from the side of the hull, though in the area abreast the turrets and further toward the bow and stern, this spacing could not be maintained, the distance between the bulkhead and the side of the ship there being 10 ft 8 in (3.25 m) in these areas: the reduction of the spacing was offset in these area by a thickening of the armour to 2.36 in (60 mm).

Two armoured decks of Wotan Hart steel protected the ships from plunging fire and bombs. The upper deck was 3.12 in (80 mm) thick above the magazines and 1.98 in (50 mm) thick over the machinery spaces. The main armoured deck was 4.72 in (120 mm) and 3.93 in (100 mm) thick respectively, although across its outboard sloped sections, the thickness was increased to improve the protection over the ship’s vital spaces. Over the magazines and machinery spaces the sloped armour was 4.92 and 4.72 in (150 and 120 mm) respectively.

Tinkering with the concept

Early in July 1940 Hitler ordered the navy to examine new battleship designs and the manner in which wartime experience might be incorporated. A study completed on 15 July contained several recommendations for the ‘H’ class ships, including an increase in freeboard and a strengthening the horizontal protection. In order to maintain displacement and speed, and also to accommodate the increased weight of the additional armour protection, the design staff drew up an informal design which removed one of the main battery turrets to save weight; increased the power of the propulsion machinery to maintain speed at the original figure, and replaced the original Diesel propulsion arrangement with a hybrid Diesel and steam turbine arrangement. The design staff also prepared a second design which retained the fourth turret and accepted a much higher displacement, but incorporated the hybrid propulsion arrangement. These studies were abandoned in 1941 after Hitler had come to the decision to halt further battleship construction until after the end of the war. The design staff therefore attempted to improve the protection of the ‘H’ class ships.