Toward the middle of the 1930s it was being realised in the more advanced aviation-minded nations that the biplane could no longer provide the increase in performance that would be demanded for the next generation of single-seat fighters faced with the task of engaging and destroying the latest bombers, which were of monoplane configuration and of comparatively high performance. This greater emphasis was steadily placed on the monoplane layout: the UK issued its Specification F.7/30 resulting in the design of the Bristol Type 133, Supermarine Type 224 and Vickers Type 151 Jockey low-wing monoplanes; in France Dewoitine built the D.510 low-wing monoplane; in the USSR Polikarpov produced the I-16 low-wing monoplane; in the USA two low-wing designs were built by Boeing as the P-26 and XF7B, while Curtiss and Dayton-Wright produced XF13C and XPS parasol-wing monoplanes respectively, both of them with retractable main landing gear units; Polish designers also favoured the parasol- or gull-winged concept; and in the Netherlands Fokker built the D.XXI low-wing design with fixed landing gear.

In 1934, the Reichsluftfahrtministerium also became interested in the concept of the single-seat fighter of monoplane configuration, and issued a specification for such a type with a powerplant based on the new Junkers Jumo 210 liquid-cooled inverted V-12 engine. Four companies submitted proposals, and of these organisations all but Focke-Wulf opted for the low-wing concept. The Focke-Wulf aeroplane was designed by a team under the leadership of Oberingenieur R. Blaser and the overall supervision of Dipl.-Ing. Kurt Tank. This Fw 159 was in essence a scaled-up version of the Fw 56 Stösser advanced flying trainer fitted with retractable main landing gear units. It was these last which made the Fw 159 so interesting a design. The legs of the main landing gear units were double-jointed and, as they were retracted, were compressed and raised vertically into an aperture only fractionally larger than the wheel, small doors then enclosing the retracted wheels. The landing gear was completed by the tailwheel located beneath the rear part of the fuselage.

The fuselage was an oval semi-monocoque structure built of Duralumin with a stressed metal skinning. Similar materials were used for the wing, which was of modified NACA section. The wing was carried above the centre section of the fuselage by a pair of N-type cabane struts, and was braced on each side by a single streamlined strut rising upward and outward from the relevant lower longeron. The tail unit was a cantilever structure with single horizontal and vertical surfaces, the former comprising the tailplane and two elevators, and the latter the fin and the balanced rudder. The cockpit was positioned just behind the wing’s trailing edges, and was enclosed by a canopy that included a rearward-sliding hood to provide the pilot with his means of ingress and egress.

Extensive tests were carried out with the main landing gear unit retraction mechanism of the unmarked ~Fw 159 V1~ first prototype before the start of the flight trials programme. During these tests and previous experiments carried out with a working model, the complicated retraction and extension system functioned perfectly, but not so during the aeroplane’s maiden flight. This took place early in the summer of 1935 in the hands of Flugkapitän Wolfgang Stein. The main landing gear units retracted successfully, but then failed to re-extend fully after 30 minutes in the air. Stein was immediately assailed by a series of helpful messages painted on the ground with whitewash, and eventually another pilot took off in a Fw 56 to signal to him directly. After exhausting all his fuel, Stein attempted to land the Fw 159 V1, but the landing gear collapsed and the prototype completed two somersaults before finishing on its back, through Stein was unhurt. 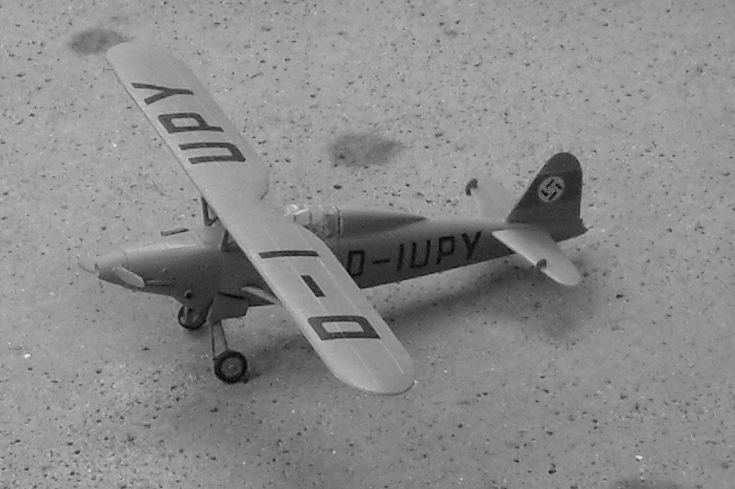 Soon after the destruction of the first prototype, the ~Fw 159 V2~ second prototype (D-INGA) was completed. This introduced a strengthened landing gear operation mechanism, but retained the same powerplant as the first prototype, namely one Jumo 210A engine rated at 610 hp (455 kW).

The ~Fw 159 V3~ third prototype (D-IUPY) was similar but was powered by the Jumo 210B engine rated at 640 hp (477 kW) and driving a two-blade wooden propeller fitted with a spinner. The fixed forward-firing armament of two 0.312 in (7.92 mm) MG 17 machine guns was installed above the engine, and provision was made for a 20 mm MG FF fixed forward-firing cannon in a Motorkanone installation between the engine cylinder banks to fire through the hollow propeller shaft.

During the spring of 1936, the four competing designs were evaluated at Travemünde. Neither the Arado Ar 80 with fixed landing gear nor the Fw 159 with its unusual layout and unreliable retractable landing gear was favoured, but it was not until much later that the Messerschmitt Bf 109 was eventually considered superior to the Heinkel He 112.

Despite the rejection of the Fw 159, the third prototype was revised with the Jumo 210G engine, rated at 730 hp (544 kW), during the summer of 1937 and with this powerplant reached a maximum speed of 218.5 kt (252 mph; 405 km/h). The test programme continued until 1938, during which both the surviving Fw 159 prototypes suffered continued landing gear failures.