Otherwise known as the Battle of Lake Balaton, ‘Frühlingserwachen’ (spring awakening) was a German strategic offensive intended to restore the Axis position on the south-eastern approaches to Vienna with a counter-offensive against Marshal Sovetskogo Soyuza Fyedor I. Tolbukhin’s 3rd Ukrainian Front starting on 6 March 1945. The last major German offensive of the war, this was a very substantial but desperate effort that achieved no significant results other than the further degradation of Germany’s military capabilities. While the German military high command was opposed to the whole plan, Adolf Hitler insisted on its implementation as what he imagined would be the springboard to eventual victory in south-eastern Europe, for he believed wholly without reason that the triumphant success of ‘Frühlingserwachen’, destroying the 3rd Ukrainian Front between the Danube and Drava rivers on each side of Lake Balaton, would open the way for the recapture first of Budapest and then of the whole of Hungary, restoring to Germany the Hungarian oilfields at Nagykanizsa that had until very recently supplied more than three-quarters of the petroleum products available to the Third Reich. 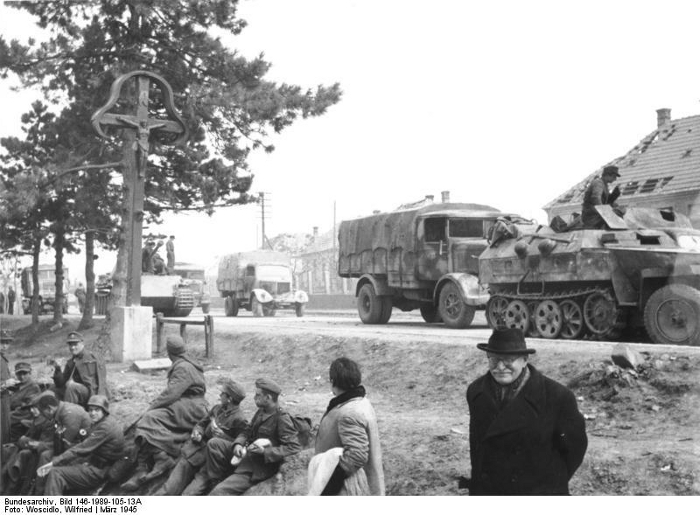 Desperately unrealistic plan
Execution of the plan was entrusted to General Otto Wöhler’s Heeresgruppe ‘Süd’: the 10 Panzer and five infantry divisions of this army group’s 6th Army and 6th SS Panzerarmee, commanded by General Hermann Balck and SS-Oberstgruppenführer und Generaloberst der Waffen-SS Josef Dietrich respectively, were to advance in the north from the line between Lake Velence and Lake Balaton toward the Danube river between Dunapentele and Mohács, and the four infantry divisions of the 2nd Panzerarmee, commanded by General Maximilian de Angelis, were to push forward from the area south of Lake Balaton in an easterly direction toward the Danube river. The northern flank was to be shielded by Altábornagy (lieutenant general) József Heszlényi’s Hungarian 3rd Army between Esztergom and Bicske. A subsidiary role was allocated to Generaloberst Alexander Löhr’s Heeresgruppe ‘E’, which was to launch three divisions to the north-east from the area between Marcali and Nagyatad across the Drava river to take Mohács supported farther to the south by smaller undertakings from Donji Miholjac and Valpovo.

No measure of Axis surprise
Balck’s 6th Army together with the Hungarian VIII Corps and Dietrich’s 6th SS Panzerarmee was to attack between Lakes Balaton and Velencze to split the 3rd Ukrainian Front into two parts. The four infantry divisions of the 2nd Panzerarmee were to attack eastward from positions south of Lake Balaton while three divisions of Heeresgruppe ‘E’ crossed the Drava river from the south. The 3rd Ukrainian Front’s formations were disposed in great depth. Tolbukhin knew that a major German offensive was imminent south-west of Budapest, and this was confirmed by Hungarian deserters at the beginning of March. The Soviet high command’s intention was to allow the German offensive to exhaust itself before the 3rd Ukrainian Front itself went over to the offensive, and for this reason the Soviet forces were ordered to hold and not to counterattack. Even so, the 3rd Ukrainian Front was in some difficulty as a result of the low-lying ground it was currently occupying, with networks of rivers and canals to its front and rear. Moreover the Danube river formed a great obstacle right across the Soviet lines of communication. In the forward area these water obstacles were of assistance in defence, but in the rear they complicated the problems of movement and supply. The Danube river was full of ice floes which threatened the eight pontoon bridges and ferry points, some of which had capacities of up to 60 tons, in service below Budapest. To overcome this difficulty an overhead cable track had been constructed capable of delivering 1,200 tons of stores daily across the river, while for the first time in the Soviet army in a forward area a pipeline was used for the delivery of fuel.

Attack in the south
On the night of 5/6 March Heeresgruppe ‘E’ launched its offensive on the Bulgarian 1st Army and Yugoslav 3rd Army across the Drava river, while the 2nd Panzerarmee attacked General Leytenant Mikhail N. Sharokhin’s 57th Army south of Lake Balaton. These attacks were only subsidiary undertakings, however, and the main offensive was started on the next day between Lake Balaton and Lake Velence, with the 6th SS Panzerarmee on the right and the 6th Army on the left, the attack falling on the 26th Army and the 4th Guards Army. The German offensive was preceded by just a 30-minute artillery barrage, but air support was restricted by the very limited numbers of aircraft available and the poor flying weather. The thrust began to make ground slowly, gaining 4 miles (6.5 km) in the first two days and 16 miles (26 km) by the end of the fourth day, the 6th SS Panzerarmee making the better progress against the 26th Army.

The German offensive was slowed and finally halted by the reserves of artillery deployed under General Polkovnik Mitrofan I. Nedelin, commanding the 3rd Ukrainian Front’s artillery, and by bringing up formations of the 27th Army to plug the gap. Casualties were very heavy on both sides. By 10 March Tolbukhin was becoming anxious about the situation as most of the Soviet reserves had been committed, and for this reason he asked to be allotted the 9th Guards Army, which was still east of the Danube and held as part of the high command reserve. This request was refused, as by 13 March the offensive was clearly losing momentum. On 14 March Wöhler committed his remaining armoured reserve, based on Generalleutnant Rudolf Freiherr von Waldenfels’s 6th Panzerdivision, and a mixed grouping of 200 tanks and assault guns continued to tackle the 27th Army over the next few days. The axis of the 2nd Panzerarmee’s attack south of Lake Balaton was changed on several occasions, but the formation was effectively pinned by the weight of the artillery fire with which it was deluged by the 57th Army, and the Bulgarian and Yugoslav forces on the Drava, with some assistance by Soviet troops, successfully contained the German bridgeheads.

Soviet counter-offensive
When it was obvious to the Soviet high command that the Germans had exhausted themselves, the Soviet counter-offensive was launched. Marshal Sovetskogo Soyuza Rodion Ya. Malinovsky’s 2nd Ukrainian Front, on the right of the 3rd Ukrainian Front, had taken no part in the battle and the 9th Guards Army was still uncommitted in reserve. The counter-offensive was to be made by the 2nd and 3rd Ukrainian Fronts, co-ordinated by Marshal Sovetskogo Soyuza Semyon K. Timoshenko as the representative of the Stavka (high command), but whereas it had originally been intended that the 2nd Ukrainian Front should make the main thrust toward Vienna, the Stavka changed its concept on 9 March by earmarking General Polkovnik Andrei G. Kravchenko’s 6th Guards Tank Army for Tolbukhin, in order that he should use it to envelop and destroy both the 6th Army and the 6th SS Panzerarmee between Lake Velence and Lake Balaton.

On 16 March the 4th Army and 9th Guards Army, with the 6th Guards Tank Army in reserve, attacked the left flank of the 6th Army north-west of Lake Velence, and struck south-west to seize the area between Lake Velencze and Lake Balaton, and so cut off part of the 6th Army and the whole of the 6th SS Panzerarmee, which the 26th and 27th Armies were to pin frontally. Wöhler’s suggestion that Dietrich’s formation should be used offensively against the Soviet flank was refused by Hitler until some days later, by which time it was too late. The SS troops started to withdraw, sometimes without orders, and an enraged Hitler repudiated the former pride of the party by ordering a personal representative to Hungary to ensure that the members of the SS, including the men of SS-Brigadeführer und Generalmajor der Waffen-SS Otto Kumm’s 1st SS Panzerdivision ‘Leibstandarte SS Adolf Hitler’, were stripped of their armbands. By 16 March the Axis forces had lost 12,358 men killed, wounded or missing, while the Soviets and their allies had lost 8,492 men killed or missing, and 24,407 men wounded or sick.

Soviet meatgrinder
At the beginning of the offensive the 3rd Ukrainian Front was said to be down to one and a half lines of ammunition, although this presumably could not have applied to the 6th Guards Tank Army, which was freshly arrived from the 2nd Ukrainian Front. With heavy air support from General Stepan A. Kravsovsky’s 17th Air Army and General Aleksandr Ye. Golovanov’s 18th Air Army, the 4th Army and 9th Guards Army fought their way slowly forward against bitter resistance as the Germans strove to keep their line of withdrawal open. It was only on 19 March that the 6th Guards Tank Army was committed.

The German escape corridor was eventually reduced to a width of less than 2 miles (3.2 km), and through this gap most of the German troops managed to escape, although only by leaving much of their heavy equipment behind them. The operation developed into a pursuit as the Germans retreated in disorder westward through the Bakony forest, unable to make a stand since no intermediate defensive positions had been prepared. On 25 March Pápa fell, and Soviet armour formations began to move north-westward toward the Raab river and the Austrian border. On this day Wöhler was replaced as commander of Heeresgruppe ‘Süd’ by Generaloberst Lothar Rendulic, considered by Hitler to be an expert in defensive warfare. Meanwhile the 2nd Ukrainian Front in the north had cleared Esztergom and the Hron river valley, and was moving on Bratislava, which it took on 4 April. German resistance in Hungary was at an end.

General Hans Kreysing’s 8th Army in the north fell back rapidly before the Soviet 2nd Ukrainian Front into Austria. Elements of the 6th Army and 6th SS Panzerarmee made some effort to defend the line of the Raab river, but they were bypassed by the 3rd Ukrainian Front, which swept on into Austria. On the southern flank the 57th Army and Bulgarian 1st Army had, after the hardest of fighting against the 2nd Panzerarmee, taken the oil producing region of Nagykanizsa on 2 April. As the Austrian border was reached the Hungarians, whose morale and enthusiasm for the Axis cause had always been low, began to give up in large numbers, no fewer than 45,000 surrendering in the two days before the end of the month. By this time the Germans had lost about 120,350 men killed, wounded and taken prisoner, while the Soviets had suffered the loss of some 78,500 men killed and 424,700 men wounded or taken ill.