On 17 November 1917, when introducing the imminent presentation of the FCM 1A prototype to the CCAA, Moritz was at pains to point out that the vehicle was a test bed and thus did not conform precisely to the original ‘A’ version specification. In its effort to get a running vehicle ready as quickly as possible, FCM had built a prototype based largely on the original mock-up, and thus this was considerably closer conceptually to the ‘B’ version, though with a 105-mm (4.13-in) gun and petrol-mechanical transmission as the CCAA had terminated the planned petrol-hydraulic transmission on 10 May. A detailed report on the plans in January 1917 provides a good overall impression of the eventual prototype. 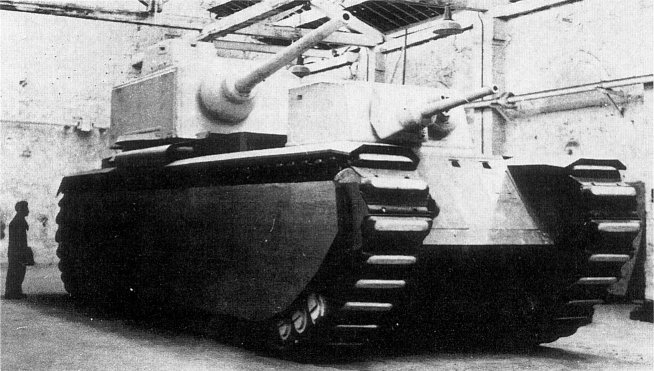 The FCM 1A’s hull was long to improve its trench-crossing capability, and had four sections which were not divided by bulkheads into separate compartments. From front to rear, these sections were a comparatively short driver’s compartment, a fighting compartment topped by the turret, a larger munitions room, and a large engine compartment. This last compartment was widened on each side over the tracks to provide volume for long rectangular-section fuel tanks. The front of the hull followed the profile of the tall climbing faces of the tracks, and thus curved gradually upward to end in a high vertical nose plate. The glacis plate behind it was almost horizontal and connected at its rear to the vertical top front plate of the driver’s compartment. As the turret ring was greater than the width of the hull, its outer arcs rested on rounded lateral extensions. The turret was a truncated cone with a roof sloping down to the front.

The originally planned crew of seven men had been trimmed in December 1917 to six men in the form of a commander, who was also the gun aimer, in the left-hand side of the turret; a second man, who served as the gunner, machine gunner and loader, in the right-hand side of the turret; a standing assistant loader handing fresh rounds to the loader (there had at first been two of these); a driver; a front machine gunner; and a mechanic who doubled as a rear machine gunner.

The main armament was a 105-mm  (4.13-in) Canon de 105 Court Schneider, shortened to reduce its recoil so that it could fit into a turret, and this was provided with 122 rounds in the form of 18, stacked in three vertical rows of six, accessible to the gunner/loader; two batches of eight below the fighting compartment floor; and 44, stacked in four vertical rows of 11 on each side of the ammunition room. There were two 8-mm (0.315-in) Hotchkiss machine guns in ball mounts, and reserve machine guns or pistols could be fired through five vertical slits which could be plugged for this purpose: these were one at the rear of the turret, two in the turret sides and two at the hull sides below the rear of the turret.

The prototype was powered by one 220-hp (164-kW) Renault 12-cylinder engine, which provided for a maximum speed of 6.2 mph (10 km/h) at 1200 rpm via a mechanical transmission with a disc clutch. The drive sprockets were at the rear, and the idlers at the front. The suspension comprised leaf-sprung bogies of four wheels each with alternating external and internal flanges, and the tracks were 23.6 in (600 mm) wide. The ground clearance was 15.7 in (400 mm), and the tank could pass over a vertical obstacle 3 ft 3 in (1.0 m) high and cross a trench 11 ft 6 in (3.5 m) wide.

The vehicle was less cramped than earlier designs, the crew being able to more or less walk through the hull with only a slight crouch, and the mechanic could access each side of the engine. The commander could communicate with the driver, the front machine gunner and the mechanic by means of speaking tubes, while external communications were the task of the mechanic, who could lift a little hatch just behind the turret to give signals by little semaphores, pyrotechnic devices or electrical lights. The tank could be entered through the cupola, but each member of the crew had an oval or round escape hatch above and below him.

On 20 December 1917 the first prototype was inspected by the CCAA’s investigating commission, and trials were held at La Seyne sur Mer on 21 and 22 December with British and US observers present. By this time, it should be noted, Estienne had succeeded Mourret as head of the CCAA. With its advanced concept, the FCM 1A made a great impression on all who saw it. The prototype demonstrated the required obstacle-climbing and trench-crossing capabilities, as well as the ability to descend into and then climb out of craters 19 ft 8 in (6.0 m) wide and 13 ft 1.5 in (4.0 m) deep. The main problem with the vehicle, however, was the difficulty the drive had in steering the vehicle as a result of its great track length and inadequate chain link profile. Lesser problems were the tendency of the tracks to slip when braked, and a tendency of the engine, derived from an aero unit, to overheat.

The first shortened Schneider gun had been received in October, but the first live-firing tests were held only on 5 and 7 February 1918, with satisfactory results.

On 4 January 1918, the technical department of the Artillerie Spéciale decided that the FCM 1A seemed the basis of an effective combat vehicle, and already on 30 December, the minister of munitions had decided that no time was to be lost  and suggested to the expenditure of 50 million francs for the manufacture of 100 FCM 1A tanks, of which the first 15 were to be delivered from July 1918, in order to have a strength of 80 such vehicles on 31 December. However, Georges Clemenceau, the prime minister, decided to leave the decision to Estienne.

Général Philippe Pétain, the new commander-in-chief of the French army, asked Estienne to use his position to end the project, but the latter replied that this was ill-advised at a time when the French people was questioning why tanks of this type had not already been placed in production. Moreover, Estienne added, the UK and USA would provide France with 700 of the new Liberty Mk VIII engines on the condition that France at least tried to produce its own heavy tanks.

Thus the French authorities felt that they had to delay the project while outwardly endorsing it. Estienne had already set this course by choosing the heaviest ‘C’ version for production, requiring a completely new prototype and thereby entailing a considerable delay. Pétain then demanded unreasonably high production numbers, thus delaying planning and initiating a political row. Pétain’s demand was for 300 heavy tanks to be ready by March 1919, and this caused a dispute between Clemenceau, who was both prime minister and minister of war, and Loucheur, who was the minister of armaments and believed that it was impossible to provide the labour and steel required. Meanwhile, Estienne and Pétain complicated the issue with further demands: the former demanded battering rams and electronic mine detectors, and the latter asked for special pontoons.

When World War I ended on 11 November 1918, not one FCM 1A had been built, and the production order for the Char 2C was cancelled. Even so, there was strong political pressure to adopt new heavy tank projects as there was now surplus capacity in heavy industry. To prevent this, the Direction de l’Artillerie d’Assaut, acting at Estienne’s instigation, decided in April 1919 to procure 10 examples of the Char 2C and use this as an argument to reject any other projects. The ploy was not wholly successful, and as late as 1920 it was proposed to the Section Technique des Appareils de Combat that a 600-tonne tank, with 9.84 in (250 mm) of armour be built! At FCM the Char 2C prototype was built almost in parallel with the nine other tanks, and all 10 machines were delivered in 1921 and modified by the factory until 1923.

These were to be the last French tanks produced for the domestic market until the advent of the Char D1 pre-production tanks of 1931. 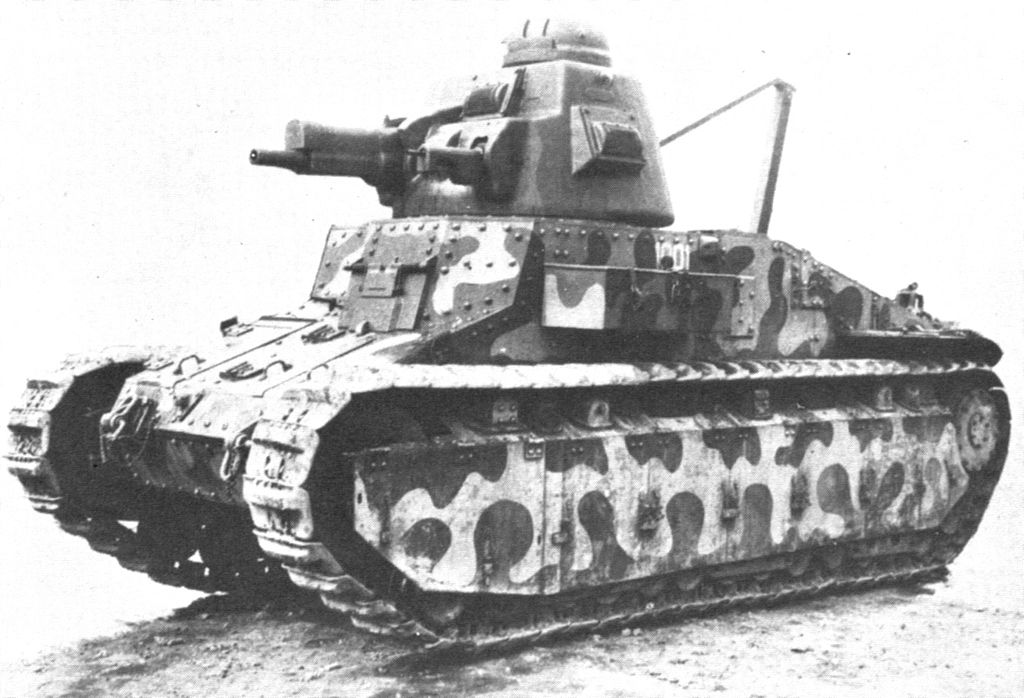 The Char 2C had a laden weight of 152,212 lb (69000 kg), in part because of its size, but in part also because of its armour, which was 1.77 in (45 mm) thick on the front and 0.87 in (22 mm) on the sides. The Char 2C is still, by some considerable margin, the largest tank ever placed in production: with its tail fitted, it was more than 39 ft 4 in (12.0 m) long. The vehicle featured two fighting compartments. The forward compartment was surmounted by a three-man turret (the first in armoured fighting vehicle history) mounting a 75-mm (2.95-in) long-barrel gun, and the rear compartment was surmounted by a machine gun turret. Three independent 8-mm (0.315-in) machine gun positions at the front gave protection against infantry assault.

Between the fighting compartments was the engine compartment. Each track was powered by its own 200- or 250-hp (149- or 186-kW) engine, via an electrical transmission, and the maximum speed was 9.3 mph (15 km/h). A capacity of 277 Imp gal (1260 litres) of fuel in seven tanks provided for a range of 93 miles (150 km). The suspension contained 39 interleaved road wheels on each side, giving the vehicle 90 wheels in all. The tank had a 12-man crew in the form of a driver, commander, gunner, loader, four machine gunners, mechanic, electrician, assistant electrician/mechanic and radio operator.

During the 1920s and 1930s the 10 tanks served with several units, and at one time the number of serviceable vehicles was just three. The type’s military value declined steadily as more advanced tanks were developed throughout the 1920s and 1930s, and by the end of the latter decade they were largely obsolete as their slow speed and high profile made them vulnerable to current anti-tank guns.

Nevertheless, as the French mobilised in 1939, all 10 were made serviceable as the equipment of the 51e Bataillon de Chars de Combat, and received the names of ancient regions of France: thus nos 90 to 99 were Poitou, Provence, Picardie, Alsace, Bretagne, Touraine, Anjou, Normandie, Berry and Champagne respectively; in 1939 Normandie was renamed Lorraine. As their primary role was civilian morale-boosting rather than combat, the Char 2C tanks were not committed to France’s only offensive of 1939, the Saar offensive of the ‘Phoney War’.

When the Germans invaded and overran France in May and June 1940, the French decided that the capture of these monstrous tanks should be prevented, and they were all earmarked for despatch by train to the south. The track was blocked by a burning fuel train on 15 June, however, so the tanks were destroyed with explosives. 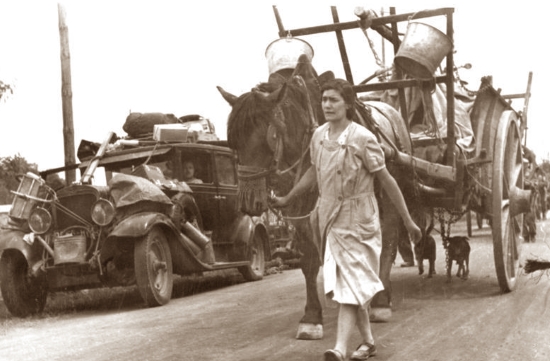 Before this, several of the tanks had been modified for trials purposes. In 1926 Champagne was modified into the Char 2C bis with a 6.1-in (155-mm) howitzer in a cast turret, and at the same time new engines were fitted and the machine gun positions were deleted. Later in the same year the tank was restored to its original configuration.

In November and December 1939, Lorraine, as the group’s command tank, was experimentally up-armoured by the Société des Aciéries d’Homecourt to render it immune to current German anti-tank guns. The front armour was increased to 3.54 in (90 mm) and the sides to 2.56 in (65 mm). In this configuration the tank had what was, at the time, the thickest armour of any operational tank, and is probably still the heaviest tank ever to enter operational service.

In 1940 12 examples of the FCM F1 tank were ordered as another very large twin-turret tank, but France was defeated before any of these entered service.