The British Air Ministry’s Specification F/7/30 for a high-performance fighter, with a maximum speed of at least 250 mph (402 km/h) and a fixed forward-firing armament of four rifle-calibre machine guns, demanded capabilities that could not realistically be met by a biplane type, although several such types were offered. These biplane types were the Blackburn F.3, Bristol Type 123, Gloster SS.19, Gloster Gladiator, Hawker PV.3 and Westland PV.4. Although it did not demand the monoplane configuration, therefore, Specification F/7/30 paved the way for the first British fighters of the ‘modern’ type, the Supermarine Type 224 and Bristol Type 133, with a cantilever monoplane wing and, in the latter, refinements such as an enclosed cockpit, retractable main landing gear units and trailing-edge flaps.

The better known of the monoplane prototypes was the Type 224 designed by Reginald J. Mitchell, which can be regarded only as an interim step and was handicapped by its use of the Rolls-Royce Goshawk engine, a development of the very successful Kestrel water-cooled V-12 unit with evaporative (steam) cooling and plagued by problems. 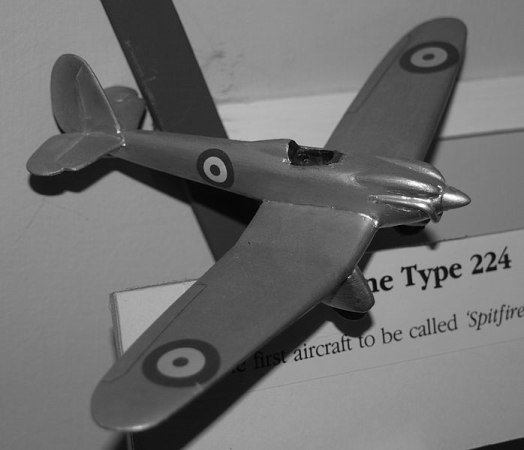 The original Type 224 design had been proposed to the Air Ministry on 20 February 1932, and finally emerged as an officially sponsored prototype (K2890), after a succession of changes, for its maiden flight in the hands of J. ‘Mutt’ Summers almost exactly two years later on 19 February 1934.

The Type 224 was a cantilever monoplane with an open cockpit and a low-set gulled wing, and was powered by the Goshawk II engine, rated at 600 hp (447.5 kW) and cooled by means of a system using steam condensers installed along the leading edges of the wing panels outboard of the wing’s angle. The wing itself was constructed about a single light alloy spar, the condensers occupying the entire wing surface forward of this spar. To the rear of the spar the wing was covered with fabric. The rear fuselage was of semi-monocoque form with longitudinal light alloy stringers and frames covered by flush-riveted panels. The fixed tailskid landing gear included wide-track cantilever main units: their legs were enclosed in full-chord ‘trouser’ fairings, and the short main oleo struts were attached to the wing spar at the outboard ends of the anhedralled centre section. The armament comprised four 0.303 in (7.7 mm) Vickers machine guns, two of them located in the wing roots and the other two in the sides of the fuselage with long blast troughs.

Known unofficially by the manufacturers as the ‘Spitfire’ (a name that did not impress Mitchell), the Type 224 was submitted for its official evaluation by the Aeroplane & Armament Experimental Establishment at Martlesham Heath after its appearance at the Hendon Display on 30 June. The maximum weight was 700 lb (318 kg) greater than the original design estimate, and the prototype returned a maximum speed of 198 kt (228 mph; 367 km/h) at 15,000 ft (4570 m), which was about 10.5 kt (12 mph; 19 km/h) lower than originally estimated. At 52 kt (60 mph; 96.5 km/h), the prototype’s landing speed was 7 kt (10 mph; 16 km/h) higher than the maximum permitted by the specification.

No one was less surprised by this disappointing performance than Mitchell himself, who was already discussing with the Air Ministry the implementation of extensive alterations including a straight wing, retractable main landing gear units and an enclosed cockpit. The Goshawk engine was retained on the assumption that the cooling problems would soon be overcome. These alterations were accepted by the Air Ministry at a cost of around £3,000, but no progress in implementing them was made and, in any case, an entirely new design (albeit deriving lessons from the Type 224) was being discussed, and further work on K2890 was suspended in favour of this new, infinitely more distinguished Spitfire.

In mid-1935 K2890 was delivered to Farnborough for use as a ‘hack’ until it was flown to Martlesham in 1937 and subsequently moved to Orfordness as a gunnery target.

Convinced that Specification F.7/30 was intended to set the aircraft industry on the path of monoplane development, and that it could not be fully satisfied by any aeroplane powered by the problematical Goshawk engine, Roy Fedden of the Bristol Engine Company suggested in February 1932 that Frank Barnwell, the Bristol Aeroplane Company’s chief designer, should prepare the design of a monoplane powered by the new Bristol Mercury VIS2 air-cooled nine-cylinder radial engine. Fedden and Barnwell saw this as a private-venture insurance against failure of the Type 123. 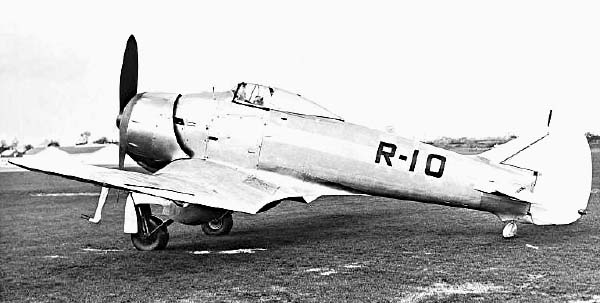 Making extensive use of Alclad aluminium alloy sheet, recently invented in the USA, the prototype Type 133 fighter was, like the Supermarine Type 224, a low gull-wing monoplane with a cantilever wing, but differed from the Type 224 not only in its powerplant but in its tailskid landing gear with main units that retracted rearward into underwing fairings situated at the wing crank angle.

When first flown by Cyril Uwins on 8 June 1934, a mere 14 months after the start of the design, the Bristol prototype featured an open cockpit, but within two months this had been provided with a sliding canopy and faired headrest. A combination of split flaps and short-span ailerons also replaced the long-span drooping ailerons originally fitted. A low-drag circular exhaust collector ring was incorporated in the leading edge of a long-chord cowling enclosing the Mercury VIS2 engine.

The manufacturer’s handling and performance trials of the prototype had been completed at Filton by the end of February 1935, and on 8 March Uwins performed the necessary spinning and diving trials before the aeroplane was due to be delivered to the Aeroplane & Armament Experimental Establishment at Martlesham Heath for service evaluation. However, before the scheduled departure, a company pilot took off for a final half-hour handling flight. On reaching 14,000 ft (4265 m) he put the prototype into a spin, but overlooked the fact that he had not retracted the main landing gear units. The aeroplane entered a flat spin from which it would not recover, and the pilot was forced to bale out before the prototype crashed and was destroyed.

No time remained in which a replacement could be prepared, and the project had to be abandoned. By then, however, Barnwell was already examining the new Specification F.5/34, which called for an eight-gun monoplane fighter.