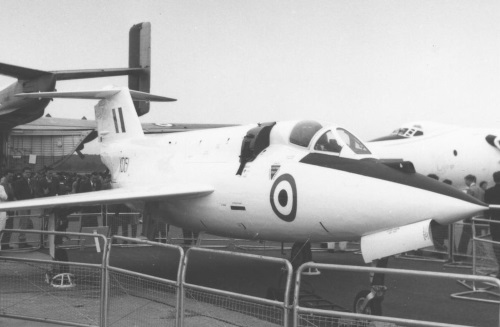 One of the small number of companies which expressed some interest in the British preliminary Specification F.124D for a rocket-powered interceptor was Saunders-Roe Ltd, which opted to prepare the design of a mixed-power fighter to Specification F.138D. Unlike the Avro Type 720, the SR.53, designed by Maurice Joseph Brennan, was of orthodox construction and employed T-tail layout with the tailplane mounted above the fin. Both the wing and the tailplane were of delta planform, and provision was made for the mounting of two de Havilland Firestreak short-range AAMs at the wing tips. A small Armstrong Siddeley Viper axial-flow turbojet engine, aspirated via inlets in the shoulders of the fuselage immediately to the rear of the cockpit canopy, was installed in the upper part of the central fuselage to provide cruise power. The front of the cockpit enclosure was provided by a conventional optically flat windscreen with curved quarter lights.

The principal conceptual difference between the Avro Type 730 and the SR.53 lay in the type of rocket motor used. Here the Saunders-Roe design incorporated the de Havilland Spectre variably throttleable engine which used aviation kerosene as the fuel and concentrated hydrogen peroxide as the oxidant: the Type 730 was based on the Armstrong Siddeley Screamer ASSc.1 rocket motor rated identically to the Spectre but using liquid oxygen as the oxidant. The primary advantage of the Spectre’s propellant arrangement lay in the fact that, apart from being somewhat less hazardous during ground handling, the use of a relatively inert fuel which was also common to the turbojet resulted in a simpler tank arrangement, all of which could be housed in the deep fuselage beneath the Viper engine.

The origins of the type can be discerned in the demonstration, during World War II, of the importance in modern warfare of strategic bombing, and as the post-war ‘Cold War’ developed, the creation of effective air defence against a possible enemy’s large numbers of bomber aircraft became a high-priority matter for many nations. In World War II Germany had looked to rocket-powered aircraft in this capacity, with fast-climbing interceptors such as the rocket-powered Messerschmitt Me 163 and Bachem Ba 349, which were capable of unprecedented climb rates and thus the capability, in theory, to takeoff and intercept enemy bombers before the latter reached their targets. German rocket technology was studied extensively by the Allies in the aftermath of the war, and in light of the threat of the growing Soviet strategic bomber fleet and newly developed atomic weapons, the British Air Ministry drafted its Operational Requirement OR. 301 in May 1951. This demanded a rocket-powered interceptor capable of reaching an altitude of 60,000 ft (18290 m) in just 2 minutes 30 seconds. This requirement was circulated to British aircraft manufacturers the following February.

The development of the de Havilland Sprite and the Armstrong Siddeley Snarler liquid-propellant rocket motors, rated at 5,000 and 2,000 lb st (22.24 and 8.90 kN) respectively, for use as rocket-assisted takeoff opened the possibility of the development of a more powerful rocket motor as the powerplant for a point-defence interceptor.

The requirements of OR. 301 were considered onerous, and included a ramp launch and landing on a skid, and with the compliance of the companies approached to tender, the amended Specification F.124T allowed for a mixed powerplant configuration, conventional landing gear and a basic armament centred on the Blue Jay AAM instead of a battery of 2-in (51-mm) rockets.

Of the six companies which tendered proposals, the pair selected for development contracts were A.V. Roe with its Type 720 and Saunders-Roe with its SR.53. Further refinement of the point interceptor’s basic concept led to Specification OR.337, and the resulting SR.53 was designed by Brennan, who was the Saunders-Roe company’s chief designer. The SR.73 was a nicely streamlined aeroplane with a sharply pointed nose, a mid.low-set delta wing, and a T-tail with a delta tailplane set about the swept fin. The Armstrong Siddeley Viper turbojet cruising engine, which was aspirated by means of small inlets of the upper sides of the fuselage just to the rear of the cockpit, and the de Havilland Spectre rocket motor were mounted a a superimposed pair in the rear of the fuselage with their nozzles set one above the other in the tail.

By September 1953 the programme to develop these aircraft had come under close examination as a result of the need to cut costs, and the Type 720 was abandoned despite the fact that its first prototype was almost ready to start its flight trials at this time. One of the reasons why the SR,53 was preferred was that although the aeroplane was behind the Type 720 in development terms, its use of hydrogen peroxide as the rocket motor’s oxidiser was viewed as less problematic than the Avro 720’s use of liquid oxygen with all its handling difficulties. With an original contract to build three prototypes, the SR.53 was scheduled for a maiden flight in July 1954 and a service debut in 1957. At the same time, Saunders-Roe began work on a derivative design, the SR.177, which was a larger aeroplane with the ability to carry a useful air-interception radar, deemed essential to interception at the high altitudes at which the new fighter was meant to operate, despite the fact that the specification did not require it. The larger interceptor was to be developed in versions for maritime use by the Royal Navy, as well as for land-based service by the UK and West Germany.

The complexity of the SR.53’s design caused a number of delays and technical problems, most especially an explosion during ground tests of the Spectre rocket engine. As a result, the date for the SR.53’s maiden flight fell steadily further behind schedule. On 16 May 1957, Squadron Leader John Booth was at the controls of the first prototype (XD145) for its maiden flight, and the same pilot took the second prototype (XD151) into the air for the first time on 6 December of the same year. The results of the flight test programme included comments such as ‘…an extremely docile and exceedingly pleasant aircraft to fly, with very well harmonized controls’. Some 56 test flights were completed by the prototypes, these revealing impressive performance figures including a climb to to 50,000 ft (15240 m) in 2 minutes 0 seconds and a speed of 762.5 kt (878 mph; 1413 km/h) or Mach 1.33 in level flight at that height: it was confidently expected that the SR.53 would ultimately attain 1,262 kt (1,453 mph; 2338 km/h) or Mach 2.2 at high altitude. 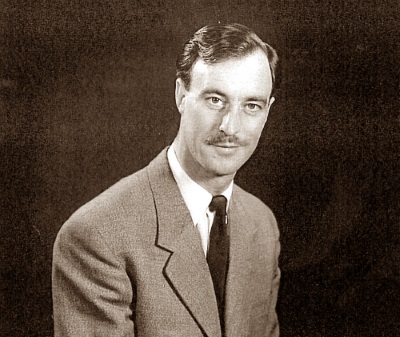 While being tested at Boscombe Down, XD151 crashed on 5 June 1958 during an aborted takeoff on its twelfth flight. Running off the runway, the aeroplane struck a concrete approach light, exploding on impact and killing Booth. The remaining prototype continued its flight test programme in the hands of Lieutenant Commander Peter Lamb.

The SR.53’s maiden flight took place just more than one month after the publication of the 1957 Defence White Paper outlining the British government’s decision effectively to abandon piloted warplanes in favour of guided missiles. At the same time, the development of turbojet engines had advanced considerably in the six years since the SR.53 had been designed. Combined with the fact that concomitant improvements in radar meant that any incoming bomber threat could be detected much earlier, this meant that the need for an aircraft like the SR.53 had disappeared, and the entire project was cancelled on 29 July 1960 before the planned third prototype (XD153) had been built.

The SR.177 concept was never regarded with anything more than polite interest by the Royal Air Force which, in 1954, had finally opted for the afterburning turbojet in preference to the rocket motor for enhanced power and longer endurance, and it was the Admiralty which caused a new order to be raised for a development of the SR.53. This was to be powered by the de Havilland Gyron Junior turbojet engine, aspirated via a nose inlet and rated at 8,000 lb st (35.59 kn), in place of the Viper, and a Spectre 5A as the rocket motor for boosted performance. This SR.177, of which six prototypes were ordered, was required to have a much strengthened airframe, an arrester hook, catapult points and landing gear stressed for deck landing operations. (It was the last requirement that posed the biggest design alteration as the low-profile, high-pressure main wheel tyres of the SR.53 could only just be accommodated within the very thin wing, whereas the lower-pressure tyres and longer-travel landing gear units of the SR.177 would be required to retract into the fuselage). Provision for inflight refuelling with jet fuel was also to be made.

Ministry of Supply support was withdrawn for both the SR.53 and SR.177 as a stated consequence of the 1957 Defence White Paper. Saunders-Roe decided to continue with the project, however, on the strength of interest being shown by the West German government, and the first SR.177 prototype was nearing completion when this interest disappeared, and all work on the project was abandoned in 1958.

One is perhaps left wondering how serious the Air Ministry and Admiralty ever were in introducing a rocket-powered fighter into service, even for point defence of major targets in the UK, bearing in mind the time and cost of training pilots in an entirely new concept of fighter handling, and of installing the extensive facilities for highly volatile fuel storage at operational airfields. It should be remembered that the defence cost cutting that continued into the early 1960s were imposed progressively less in the context of the 1957 Defence White Paper, and increasingly to satisfy the rapidly mounting cost of the BAC TSR.2 strike warplane on which so many professional reputations were being staked. An even larger variant was studied as the SR.187, but this was also cancelled in 1957.

In overall terms the SR.177 had begun as an advanced design concept for the SR.53, but when a development contract was issued by the Ministry of Defence to Specification F.155, the project was given its own designation. The most significant difference between the two aircraft was the use in the SR.177 of an axial-flow turbojet engine with nearly five times the thrust of the one chosen for the SR.53. This meant that while the SR.53 relied mostly on its rocket engine for excellent climb performance, the SR.177 would be able to add considerable endurance by conserving use of its rocket for the dash toward its target. It was expected that the added endurance would allow the SR.177 to perform roles, such as strike and reconnaissance, other than interception. The SR.53 design was considerably enlarged to accommodate the new engine, and the original sleek lines were forfeited for a large chin inlet to supply air for the turbojet.

Funding was secured in July 1956 for a total of 27 aircraft, and the first was expected to fly by April (later October) 1958. However, the 1957 Defence White Paper which called for piloted warplanes to be replaced by missiles, and by the time the programme was axed later in the same year, the SR.177 had proceeded little past mock-up stage. Work on the aircraft continued a short time longer, however, in the anticipation of continued interest from West Germany. The British Ministry of Supply agreed to continue funding for five of the six prototypes, but nothing was to come of it. The West German government had also changed its priorities from an interceptor to a strike fighter, leading Saunders-Roe to redesign the SR.177 for this role. This was followed immediately by another redesign when Rolls-Royce successfully convinced the West German government to replace the de Havilland engine intended for the SR.177 with a Rolls-Royce axial-flow turbojet, the RB.153. Even with Heinkel preparing to manufacture the aircraft locally under licence, West Germany withdrew support and eventually chose, in company with other European nations, to purchase the Lockheed F-104 Starfighter in a form made under licence.

Armament: (proposed) up to a not available weight of disposable stores carried on two hardpoints (both under the wing), and generally comprising two Firestreak short-range AAMs