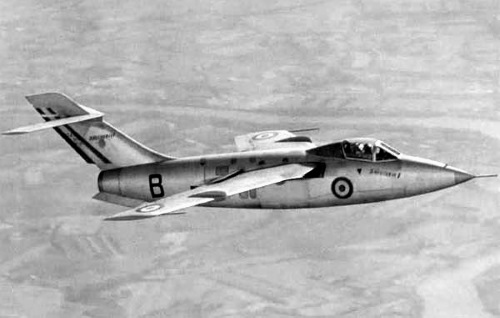 France was occupied by German forces during a large part of World War II, and after the country’s liberation the first priority of the revived French air force was to rebuild its strength and overall capabilities with warplanes that were, for political as well as economic reasons, to be of French design and powered, wherever possible, by French engines. The first task facing the revived French air force was the creation of an air-defence capability that would protect France from air attack, and this task was well in hand by 1950.

This provided the air force with the opportunity to pursue the next stage of its development plan, which was concerned with the replacement of the miscellany of obsolescent US warplanes, most notably the Douglas A-26 Invader and Republic P-47 Thunderbolt, currently constituting the backbone of its tactical attack and close support capabilities in company with the more modern Sud-Est Mistral (licensed de Havilland Vampire) fighter-bomber. By this time tactical air operations in the Korean War (1950/53) were revealing the difficulties of preparing adequate numbers of hard (and vulnerable) runways immediately behind a moving battle front, and the French air force requirement of 1951 therefore demanded that the new warplane should be capable of operating from unprepared airstrips.

The response of Sud-Est, under the leadership of Georges Heriel, was the ingenious SE.5000 Baroudeur, the name being a Foreign Legion term, derived from the Arabic baroud  (battle) for a gutsy fighter. This was a trim but basically conventional type with the exception of its landing gear, whose main units comprised a retractable arrangement of three magnesium skids with replaceable steel shoes, two of these skids being located as a side-by-side pair forward of the centre of gravity under the wing and the third under the rear fuselage. The aeroplane was designed under the supervision of Wsiewolod J. Jakimiuk, before World War II a senior designer with the Polish manufacturer PZL and after it with the de Havilland company in Canada and the UK. The aeroplane’s skid landing gear arrangement was designed to allow it to land on surfaces as diverse as dry or frozen grass, thick or very thick grass, muddy grass or heavy chalk soil.

To provide ground-handling manoeuvrability as well as the capability to operate from runways (both paved and unpaved) with a maximum warload, the SE.5000 was given a wheeled trolley, built by Messier, onto which the lower fuselage fitted. The warplane was provided with small retractable skids below the cockpit for this purpose, and could be winched onto the trolley in less than two minutes by the specially equipped jeep which towed the trolley. The trolley could be retained in flight if a certain loss of performance could be tolerated, had a tricycle wheel arrangement (with single differentially braked main wheels and twin steerable nose wheels each carrying a low-pressure tyre for soft-field operability), and could be fitted with up to six STRIM solid-propellant rockets each rated at 1,653 lb st (7.35 kN) for five seconds: two or four could be used for boosted takeoff depending on the nature of the ‘runway’ and two were reserved for emergency use. The trolley’s rear wheels were fitted with brakes which could be operated by the pilot while the warplane was still on the trolley, but which were applied automatically after the warplane had lifted off to halt the trolley very rapidly.

The aeroplane proper was of all-metal construction of the stressed-skin variety, and was based on a nicely streamlined fuselage of essentially ovoid cross section with an I-beam main structural member on the lower part of its forward section to carry the takeoff and landing loads. In addition to the landing gear arrangement, this fuselage supported the high-set cockpit (under a rearward-sliding canopy of the clear-view type), the armament provision for two 30- or 37-mm fixed forward-firing cannon, and the flying surfaces. These latter comprised a vertical tail surface whose considerable sweep angle contributed to the design team’s ability to keep the jetpipe very short, a horizontal tail surface (combining a trimmable tailplane and standard elevators) located about two-thirds of the way up the vertical tail to keep it well clear of the wing’s turbulence at high angles of attack, and the shoulder-set wing. This last item was built in simple halves attached to the fuselage on each side by a mere five bolts: each wing half was based on a single main spar with two auxiliary spars rather than on the more normal torsion box arrangement, and other features included a quarter-chord sweep angle of 36°, four-section slats on the leading edge, a combination of inboard flaps and outboard ailerons on the trailing edge, and on the root section of the trailing edge an air brake that was pivoted in its centre so that as the rear edge was lowered the forward edge (perforated to avoid buffet of the tail unit) was lifted, the aerodynamic balance of the lifting and lowering surfaces contributing to the ease with which the air brake on each side could be deployed by its hydraulic ram. The powerplant was a single SNECMA Atar 101 axial-flow turbojet engine located in the rear fuselage, where it was aspirated via two wing-root inlets and exhausted via a plain nozzle.

The French air ministry ordered two SE.5000 prototypes, and the first of these recorded its maiden flight on 1 August 1953 as the SE.5000.01 with the powerplant of one Atar 101B-2 engine rated at 5,291 lb st (23.54 kN) dry. This first machine was used for general handling and performance trials, and was also employed for highly successful trials with the take-off trolley. The only major changes effected in this aeroplane as a result of initial trials were the retrofit of two leading-edge fences to inhibit the spanwise spread of a root stall to the ailerons, and the combination of 3° more anhedral on the wings and the addition of two outward canted ventral fins (fitted with steel shoes in the hope that it might be possible for these surfaces to replace the extending tail skid) under the rear fuselage in a largely successful attempt to reduce the aeroplane’s tendency to Dutch roll.

The SE.5000.02 second prototype was powered by the Atar 101C engine rated at 6,173 lb st (27.46 kN) dry, and was delivered with the aerodynamic changes already effected on the SE.5000.01. The only other major change from the SE.5000.01 was the addition of a brake chute, generally streamed just before landing, in a housing below the rudder. This machine recorded its maiden flight on 12 May 1954, and trials revealed a maximum speed of 561 kt (646 mph; 1040 km/h) at 19,685 ft (6000 m) as well as the ability to attain marginally supersonic speed in a shallow dive, as first revealed during July 1954. After the completion of their initial trials, these two aircraft were taken in hand during October 1955 for revision to the standard in which they would undertake official trials with the first two Baroudeur pre-production warplanes. 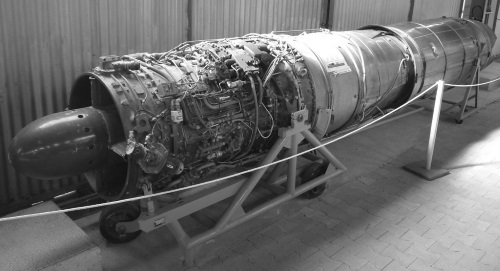 Despite its promise and the fact that it compared favourably with other light tactical fighter prototypes, the Baroudeur failed to secure a production contract as a partial consequence of a change in government policy, and the French air force instead received two altogether heavier machines, the Republic F-84 Thunderjet and  F-84F Thunderstreak, which each required a very long runway, as interim equipment pending deliveries of the Dassault Super Mystère supersonic fighter and the Dassault Mirage III Mach 2 fighter. Any other hope of a production order for the Baroudeur was dashed by NATO’s selection of the Fiat G91, with its conventional wheeled landing gear, as winner of the NATO light tactical fighter competition. 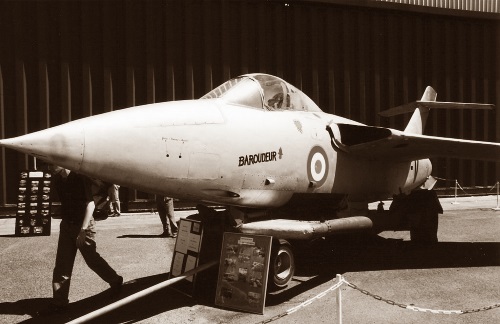 Type: experimental aeroplane for use as a light tactical attack prototype able to operate from extemporised airstrips

Accommodation: pilot on a Hispano-Suiza (Martin-Baker) zero/low-speed ejection seat in the enclosed cockpit

Armament: two 30-mm Hispano-Suiza HS-603 fixed forward-firing cannon, replaceable by four 0.5-in (12.7-mm) Browning M3 fixed forward-firing machine guns, in the sides of the lower forward fuselage, and up to 1,102 lb (500 kg) of disposable stores carried on two hardpoints (both under the wing with each unit rated at 551 lb/250 kg), and generally comprising two 500- or 551-lb (227- or 250-kg) free-fall bombs, or two napalm tanks, or two multiple launchers for air-to-surface unguided rockets