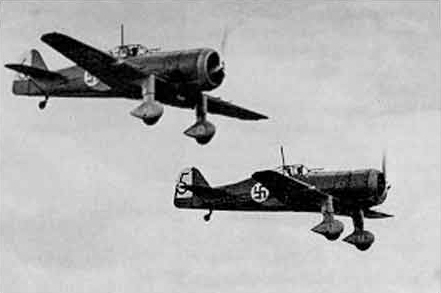 In 1935 the air service of the Netherlands East Indies Army issued a requirement for a fighter, and a team of the N.V. Nederlandsche Vliegtuigenfabriek Fokker headed by Erich Schatzki responded with its design for a moderately advanced machine that retained Fokker’s traditional mixed metal and wood construction with more advanced features such as a low-wing cantilever monoplane configuration, an enclosed cockpit with a framed canopy including an opening section that hinged to port, trailing-edge flaps inboard of the ailerons, the powerplant of a Rolls-Royce Kestrel IV liquid-cooled V-12 engine rated at 650 hp (485 kW) and driving a three-blade metal propeller of the variable-pitch type, and provision for an armament of machine guns or cannon in the wings and/or the fuselage: the estimated performance figures included a maximum speed of 221 kt (255 mph; 410 km/h) at 13,945 ft (4250 m), service ceiling of 32,810 ft (10000 m), and range of 479 nm (552 miles; 888 km).

The core of the structure was the oval-section fuselage, which was of welded steel tube construction covered rearward to a point in line with the wing’s trailing edge with Duralumin panels and aft of this line with fabric. The fuselage carried flying surfaces that comprised a strut/wire-braced tail unit of fabric-covered welded steel tube construction and a low-set cantilever wing of plywood covered wood and plywood construction: the wing was slightly dihedralled, tapered in thickness and chord, and carried on its trailing edges outboard ailerons of fabric-covered metal construction, and inboard flaps of the split type. The airframe was completed by the fixed tailwheel landing gear, which included divided main units of the cantilever type with faired legs and spatted wheels.

Far Eastern service?
Acting for its counterpart in the Netherlands East Indies, the Netherlands army air service placed an order early in 1935 for a single D.XXI-1 prototype with the different powerplant of one Bristol Mercury VIS air-cooled nine-cylinder radial engine rated at 645 hp (481 kW) supplied with from a standard fuel capacity of 77 Imp gal (92.5 US gal; 350 litres) in a fuselage tank behind the engine that could be supplemented from two wing tanks, and an armament of four 0.312 in (7.92 mm) FN-Browning M.36 machine guns installed as a pair of weapons in the fuselage with 500 rounds per gun and synchronisation equipment to fire through the propeller disc, and two free-firing weapons in the leading edges of the wing with 300 rounds per gun.

The D.XXI-1 prototype recorded its maiden flight on 27 March 1936 and revealed an attractive blend of adequate performance and good handling. In the same month, however, the Dutch authorities underwent a change in their perception of military air requirements, deciding that bombers for offensive use would be of greater utility than fighters for defensive employment. This cast a doubt over the future of the D.XXI that was deepened by the arrival of a proposal for the more advanced Koolhoven F.K.58, which had been designed by Schatzki after his departure from Fokker and therefore reflected a later stage of the designer’s thinking in features such as retractable main landing gear units for a maximum speed estimated at 281 kt (323 mph; 520 km/h).

Despite the higher specification attached to the F.K.58 proposal, however, the Dutch army air service decided to undertake a competitive evaluation of the two prototypes, and the D.XXI-1 was delivered for official trials in November 1936. 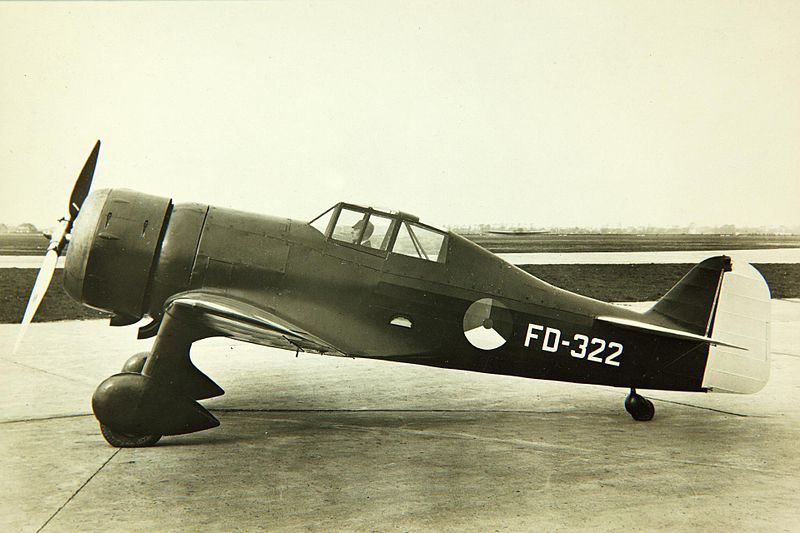 Limited Dutch production
The F.K.58 prototype did not record its maiden flight flight until September 1938, and in 1937 the Netherlands army air service had received funding for a modest expansion including 36 examples of the D.XXI-2 with the powerplant of one Mercury VII or VIII engine rated at 830 hp (619 kW). The 36 such fighters for the Dutch army air corps were delivered between July 1938 and September 1939, the last aircraft being handed over just over one week after the German invasion of Poland that started World War II and then led to the German conquest of the Netherlands in May 1940.

At the time of the German attack, the Dutch army air corps had 29 D.XXI fighters in operational condition with the 1e Ja.V.A. (1st Fighter Group with 11 fighters at De Kooy near Den Helder), the 2e Ja.V.A. (2nd Fighter Group with 10 fighters at Schiphol near Amsterdam) and the 5e Ja.V.A. (5th Fighter Group with eight fighters at Ypenburg near the Hague). The aircraft fought valiantly and achieved some individual successes, but could not seriously affect the momentum of the German tide of air and ground domination: by the third day of the fighting further D.XXI operations were seriously hampered by shortages of ammunition and pilot exhaustion, and at the end of the five-day German campaign against the Netherlands only eight aircraft were left for destruction on the ground at the time of the Dutch surrender.

The renewed Dutch interest in the D.XXI, it should be noted, had been spurred by the completion and subsequent Dutch evaluation of the first aeroplane of the Finnish order that had started the D.XXI production programme. As the Dutch were dithering about whether or not to order the D.XXI, there had been some foreign interest in the type, leading in 1937 to Finnish, Danish and Spanish Republican orders and production licences.

Finnish manufacture
The Finnish order comprised seven Dutch-built aircraft with an armament of four 0.303 in (7.7 mm) machine guns and the powerplant of one PZL- or Tampella-built Mercury VII engine made in Poland or Finland respectively, and a licence was also negotiated for further aircraft of the same basic type to be built by the Valtion Lentokonetehdas (State Aircraft Factory) at Tampere: this resulted in the construction of an eventual 93 more aircraft between 1939 and 1944.

Denmark had received two Dutch-built D.XXI fighters, and now ordered from the Royal Army Aircraft Factory in Copenhagen 10 licence-built aircraft with the powerplant of one Mercury VIII engine and the armament of two cannon and two machine guns: eight of these fighters were operational with the 2.Eskadrille of the Danish army air service at the time of the German invasion of Denmark in April 1940, but saw no action.

Spain bought no aircraft from the Netherlands, but instead concentrated on licensed production of a variant with a Soviet engine, the M-25 air-cooled nine-cylinder radial unit rated at 710 hp (529 kW), at the La Hispano Aviaciòn’s facility at San Vincente del Raspeig near Alicante: an initial batch of aircraft was approaching completion at the time that the factory was overrun by advancing Nationalist insurgent forces in 1938, and it is thought that only one aeroplane was ever completed. 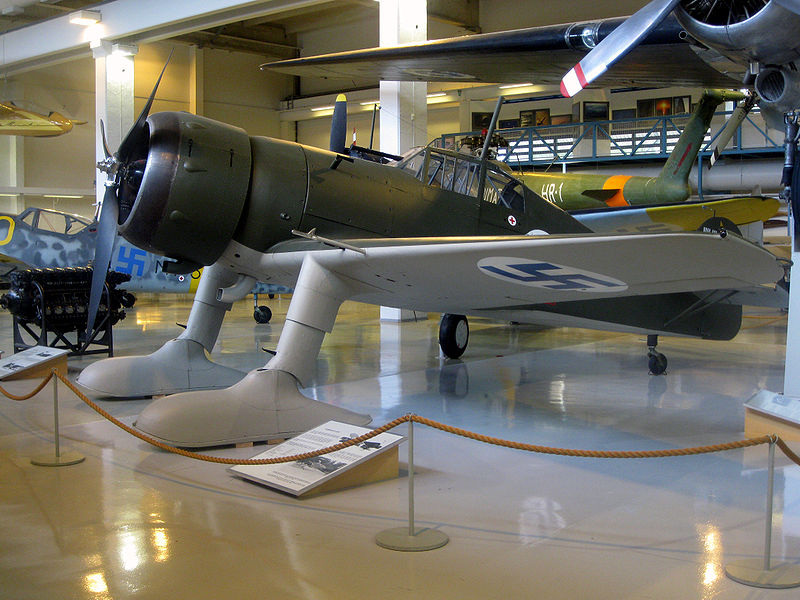 Finnish development
Such had been the success of the D.XXI-3 in the ‘Winter War’ that the Finnish air force wanted more aircraft of the same type, but the VL organisation was too busy with the repair of damaged aircraft to undertake further production until a time late in 1940. The variant that then entered production was the D.XXI-4 with a different powerplant as supplies of the Finnish-built Mercury engine were earmarked for another type, namely VL’s licence-built version of the Bristol Blenheim light bomber.

As part of its development of improved D.XXI models, Fokker had completed the design of a variant with the Pratt & Whitney R-1535 radial engine before the Netherlands’ defeat by Germany in May 1940, and it was this model that now entered Finnish production for a first flight in January 1941. Finland had bought 80 Twin Wasp Junior engines from the USA in 1940, and production of the D.XXI-4 with this engine totalled 50 aircraft. Flight trials revealed that use of this engine, rated at 825 hp (615 kW) in the R-1535-SB4CG variant adopted by the Finns, resulted in a slight degradation of performance and agility. The only other major changes effected in the D.XXI-4 were the revision of the armament to four 0.303 in (7.7 mm) machine guns in the leading edges of the wing, the enlargement of the vertical tail surface for continued directional stability despite the larger engine, and the rearward extension of the cockpit glazing to provide the pilot with larger fields of vision.

The D.XXI-5 designation was used for a final batch of five Finnish aircraft delivered in 1944 with the revised powerplant of one Bristol Pegasus air-cooled nine-cylinder radial engine rated at 920 hp (686 kW).

Despite their technical obsolescence, all three D.XXI variants remained in useful service with the Finnish air force to the end of the ‘Continuation War’ in September 1944, and were retired from first-line service only in 1948 for a final withdrawal from training and utility service during 1952.

Internal fuel: 77 Imp gal (92.5 US gal; 350 litres) plus provision for a not available quantity of auxiliary fuel in two wing tanks