In 1946 a Douglas design was beaten by the Vought V-346 proposal (later the F7U Cutlass) for a carrierborne interceptor capable of reaching a speed of 521 kt (600 mph; 966 km/h) at 40,000 ft (12190 m). In 1947 the US Navy launched another design competition for a carrierborne interceptor offering an exceptional climb rate through the use of a delta or modified delta planform drawing on German research in World War II. Douglas evolved a simple basic design with a wing of delta planform, and in June 1947 the US Navy contracted with the company for the preliminary design phase, which resulted in the evolution of the original delta-winged concept into a modified delta type with a mid-set wing.

This wing had considerable sweep, rounded tips, two elevons on each trailing edge and, between the elevons and jetpipe, two pitch-trimming surfaces. The selected engine was the apparently very promising Westinghouse J40 axial-flow turbojet unit on which many other naval warplanes were being based, and provision was made for an afterburning version of engine to provide marginally supersonic speed in level flight as well as a climb to 40,000 ft (12190 m) faster than that of any current fighter, the object being the interception of nuclear-armed attack warplanes before they reached the point at which they could launch their weapons against any US carrier-based battle group. The engine was located in the rear of the fuselage between the swept vertical tail surface and the two wing-root inlets, which were placed just behind the high-set cockpit and nose unit of the tricycle landing gear. The landing gear’s three main units were supplemented by a retractable tail bumper wheel that was required to prevent damage to the underside of the rear fuselage at take-off.

In December 1948 the US Navy ordered two XF4D-1 prototypes of this Douglas design. Prototype construction was slow, but even so outpaced that of the XJ40-WE-6 engine, rated at 7,000 lb st (31.14 kN) dry. Eventually the first XF4D-1 took to the air for its maiden flight on 23 January 1951 with the powerplant of one Allison J35-A-17 axial-flow turbojet engine rated at 5,000 lb st (22.24 kN) dry. The second prototype followed with the same type of Allison engine, whose low power prevented any exploration of the new aeroplane’s high-speed performance, but both aircraft were later re-engined first with the XJ40-WE-6 non-afterburning engine and then with the XJ40-WE-8 afterburning engine. With the latter engine the XF4D-1 captured the world absolute speed record, reaching an average speed of 653.88 kt (752.94 mph; 1211.49 km/h), but the engine was then cancelled because of its protracted development problems.

Douglas had foreseen this problem, and was able to revise its design to allow use of another and altogether more effective turbojet engine, the Pratt & Whitney J57 axial-flow unit which was not only more reliable but also more powerful. In March 1953 the Skyray was ordered into production as the F4D-1 with the J57-P-2 engine. The first of these fighters flew in June 1954, exceeding Mach 1 in the course of this initial flight. Despite the high speed reached by the first production machine, the airframe and engine were not well matched and the type’s service debut was delayed by the need to revise the geometry of the inlets, to introduce boundary-layer splitter plate ahead of each inlet, and to modify the fairing round the afterburner installation.

Thus the F4D-1 entered service only in April 1956, and was generally known as the ‘Ford’. Thereafter the type proved effective and popular, being especially notable for its high speed, excellent rate of climb, and outstanding manoeuvrability. Production ended in December 1958 with the delivery of 419 aircraft. The surviving examples of this sole production model received the revised designation F-6A in 1962, and at a time of rapid aeronautical development enjoyed only a short first-line career. The US Navy and US Marine Corps retired their last operational Skyray fighters in February 1964, though the last aircraft were not phased out of service with the US Naval Test Pilot School until December 1969. 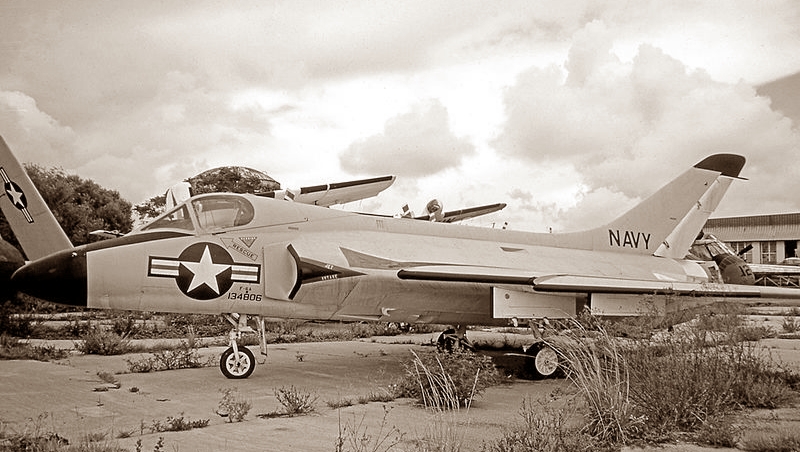 Accommodation: pilot on a Douglas Escapac ejection seat in the enclosed cockpit

Fixed armament: four 20-mm M12 fixed forward-firing cannon with 70 rounds per gun in the leading edges of the wing