Toward the end of June 1945, with the end of fighting against Japan in World War II less two months away and only three months after the maiden flight of the Douglas XBT2D-1 prototype, the US Navy’s Bureau of Aeronautics requested Douglas to consider the possibility of a new generation of carrierborne warplanes with turboprop or, as it was called at the time, propeller turbine propulsion, and then to undertake a number of design studies. Over the following 18 months, the company prepared three such designs as precursors for a proposed XBT3D-1 torpedo and level bomber: the D-557A was to have the powerplant of two General Electric TG-100 turboprop engines in wing-mounted nacelles, the D-557B two TG-100 turboprop engines in the nose to drive a contra-rotating propeller unit, and the D-557C one Westinghouse 25D turboprop engine. 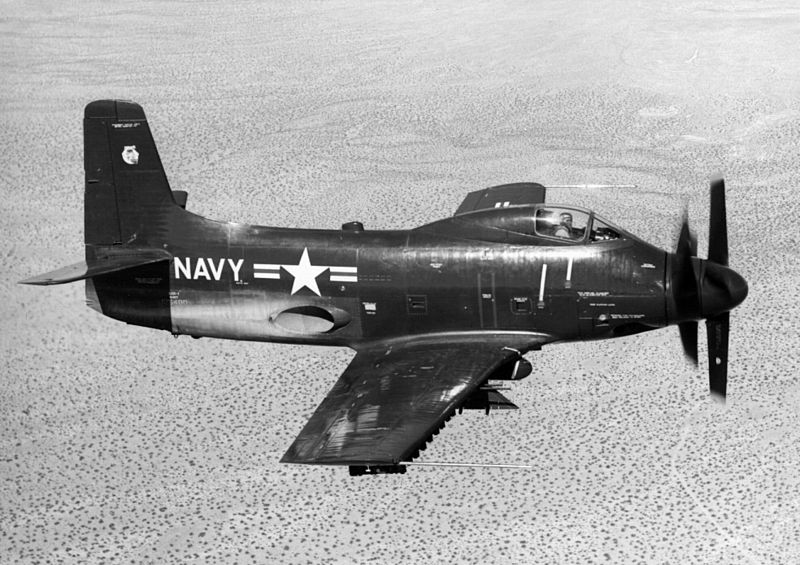 The next stage took the programme past the mock-up stage to the modification of an XBT2D-1 as the prototype for the turboprop-powered warplane. Before this conversion had been completed, however, the project was cancelled as a result of problems with the development of the engine.

A round of new studies followed, and these were based on a powerplant of either two Allison 500 turboprop engines or, in the case of a Douglas project, two Westinghouse 24C turbojet engines in a side-by-side arrangement with their exhaust gases powering a large turbine which, in turn, drove a contra-rotating propeller unit. None of these studies proceeded beyond their early stages.

The Power Plant Section of the Bureau of Aeronautics had in the interval become confident that the turboprop engine would have a specific fuel consumption markedly lower than that of the pure turbojet engine. Reliable flight data were required, however, and as a result the Bureau of Aeronautics requested the funding for the conversion of an existing aeroplane with a turboprop-engined powerplant. The converted aeroplane was not only to be a testbed but also to possess development potential for eventual production as an attack warplane.

The parallel Douglas studies and Bureau of Aeronautics requirements were then brought together, and in June 1947 Douglas received a preliminary order for the preparation of preliminary layouts, wind-tunnel testing, and the construction of a mock-up. The mock-up was successfully inspected in September 1947, and later in the same month the company received a contract for two XA2D-1 prototypes each powered by one Allison XT40-A-2 turboprop engine.

The design team at first concentrated its thinking on a simple evolution of the airframe of the new AD Skyraider attack warplane with its nose-mounted radial piston engine replaced by the XT40-A-2 turboprop engine. It soon became clear, however, that this process would not yield the best possible results from a powerplant offering more than twice the power of the Wright R-3350 Duplex Cyclone engine installed in the AD, and it was decided to undertake a major redesign of the aeroplane to ensure that the capabilities of the XT40 turboprop engine would be more fully exploited. The result was virtually a new aeroplane bearing little more than a close familial resemblance to its predecessor: the planform of the wing was not altered but its root thickness was reduced from 17% to 12%; the tail unit was new, and the vertical surface’s height and area were further increased after the completion of the first prototype’s initial trials; the main landing gear units were of similar design to those of the AD but were strengthened and had greater stroke; and, most significantly of all, the powerplant of one XT40-A-2 turboprop engine was mounted inside the fuselage above the wing and therefore to the rear of the cockpit, which was now a pressurised unit located right up in the sharply tapered nose with accommodation for the pilot on an ejection seat.

The XT40 powerplant comprised two T38 turboprop engines driving a contra-rotating propeller unit by means of a common gearbox, and the nature of this powerplant made it possible in the cruise regime to shut down one of the T38 units as a means of reducing fuel consumption and thereby increasing range and endurance: this meant a reduction in cruising speed, but had no effect on the aeroplane’s handling.

The XA2D-1 was thus a low-wing cantilever monoplane of stressed-skin construction in light alloy. The core of the structure was the fuselage, which was of oval section and carried, from front to rear, the cockpit section for the pilot (under a upward-bulged canopy with a means of access and egress provided by a rearward-sliding section incorporating two large lateral transparencies), powerplant with two large rearward-angled exhausts on the lower sides of the fuselage behind the wing trailing edge, and cantilever tail unit. This tail unit comprised single horizontal and vertical surfaces, the former including a high-set dihedralled tailplane and balanced elevator halves, and the latter including a fin and a balanced rudder.

The wing incorporated much of the fuel capacity, and comprised dihedralled halves which extended from the side of the lower fuselage, were tapered in thickness and chord to their slightly rounded tips, had a forward-curved inboard end to their leading edges, and carried across the full span of their trailing edges outboard ailerons and inboard flaps, the division between these two moving surfaces marking the line along which the outer part of the wing folded upward and inward to reduce the aeroplane’s carrierborne footprint.

The airframe was completed by the landing gear, which was of the tailwheel type with provision for an extendible arrester hook under the rear fuselage: the single-wheel tail unit retracted into the underside of the rear fuselage, while the single-wheel main units folded to the rear and rotated through 90° as they retracted into wells in the underside of the wing with their legs covered by small external fairings.

The powerplant installation is described above, and comprised a side-by-side pair of turboprop engines that were aspirated via small inlets on the lower sides of the nose, and drove a contra-rotating assembly of two three-blade propellers. 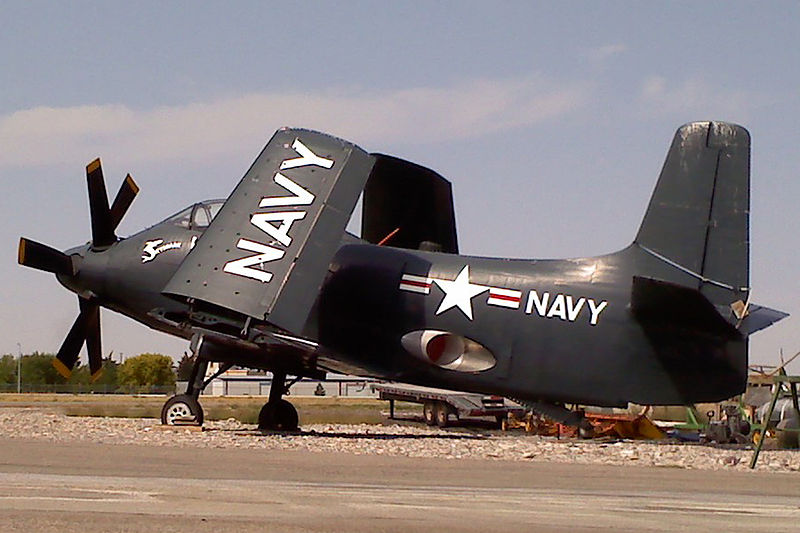 The first of the XA2D-1 Skyshark prototypes recorded its maiden flight on 26 May 1950 at Edwards Air Force Base, California, and the accelerated flight test programme was undertaken by the two prototypes and by six of the 10 production aircraft. With the exception of the maximum speed, which was about 10% below that estimated, the performance and handling of the Skyshark were highly promising, and were significantly better than those of the AD. In more precise terms, the Skyshark offered 50% better performance than the Skyraider in terms of bomb load per mile per hour, and at the same time had a 160% better climb rate, 50% higher service ceiling, and 55% faster maximum speed. On the other side of the coin, however, the Skyshark suffered protracted powerplant teething troubles, especially with regard to the gearbox and the contra-rotating propeller unit, and this reliability was little better in the XT-40-A-6 that was a semi-production version retrofitted in the second prototype. The powerplant’s poor reliability resulted in several incidents and also in two accidents, one of them fatal.

The A2D-1 was the production version of the Skyshark, of which an initial 349 examples were ordered. Only the first 10 of these were completed, the last four not even being flown, while the other 339 were cancelled after the US Navy had become exasperated with the continued problems of the T40 engine and the realisation that the performance of the A2D would be completely overtaken by that of the latest attack warplane from the Douglas stable, the A4D Skyhawk.

The six A2D-1 aircraft which actually took to the air were used for a short time as engine test beds after the termination of the Skyshark development and production programmes.

Disposable armament: up to 8,000 lb (3629 kg) of disposable stores carried on 13 hardpoints (three main units under the fuselage and wing, and 10 auxiliary units under the wing), and generally comprising free-fall bombs, napalm tanks and unguided air-to-surface rockets

Equipment: communication and navigation equipment, plus a reflector weapons sight