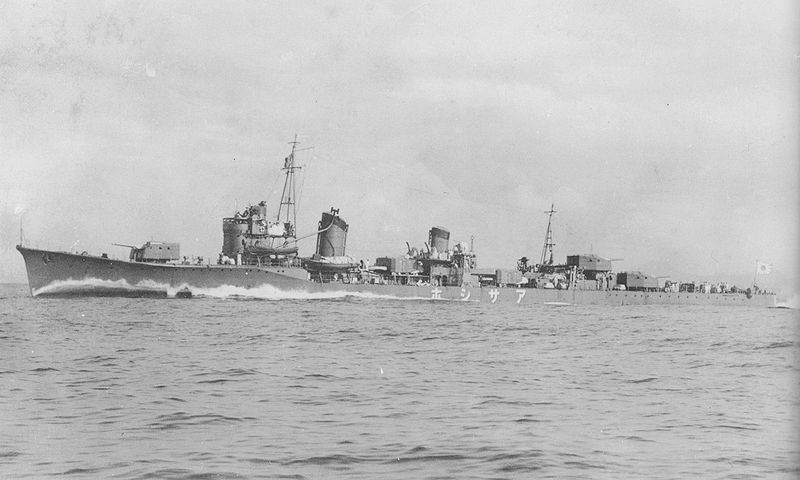 The ‘Asashio’ comprised 10 destroyers designed for the Imperial Japanese navy in the mid-1930s and in service before and during World War II.

The class resulted from the fact that the navy was not altogether happy with the capabilities of the ‘Shiratsuyu’ class of 10 destroyers launched between 1935 and 1937, especially in terms of speed and operational range. This reflected the limitations imposed by the London Naval Treaty of 1930, and in light of these the Japanese decided that it was impossible to modify these vessels for any useful enhancement of their specification. This limitation departed the Japanese government’s decision to permit the treaty to expire without renewal. This made it possible to cancel the last four of the projected 14 ‘Shiratsuyu’ class destroyers, opening the way to the design of the new and somewhat larger ‘Asashio’ class destroyer, which was approved under the Maru-2 Supplementary Naval Expansion budget of 1934 (otherwise the 1934 Programme). The 10 ships were laid down between September 1935 and March 1937 in five yards (three ships by Fujinagata, two ships each by Sasebo Navy Yard, Maizuru Navy Yard and Kawasaki, and a single ship by Uraga), launched between December 1936 and November 1937, and completed between August 1937 and June 1939. All 10 ships were lost in World War II.

Freed of treaty limitations, the ‘Asashio’ class was the first Japanese destroyer class with a displacement of more than 2,000 tons displacement, and was also the first equipped with sonar. Early problems included the unreliability of their new turbines powered by steam from improved Kanpon boilers giving the higher pressure of 312.9 lb/sq in (22 kg/cm²) at 572° F (300° C) and the design of the rudder that resulted in poor manoeuvrability, but both of these problems had been overcome by December 1941 and the start of the Pacific war.

Heavier gun armament
The main armament was still the 5-in (127-mm) L/50 dual-purpose gun, which fired a 50.9-lb (23.1-kg) shell. But whereas the ‘Shiratsuyu’ class ships had carried five of these weapons in single mounts, the ‘Asashio’ class  reverted to the arrangement of the ‘Fubuki’ and ‘Akatsuki’ classes of the late 1920s and early 1930s, namely six such guns in two twin mounts. The guns were mounted in Type C turrets giving the guns an elevation angle of 55°. The location of X turret, at shelter deck level forward of the quarterdeck Y turret, gave the ‘Asashio’ class a silhouette different to that of ‘Shiratsuyu’ class, which had both of the after turrets at quarterdeck level. As with other Japanese destroyers of the time, the anti-ship torpedo armament was notably heavy, for it was based on the 24-in (610-mm) Type 93 (‘Long Lance’) weapon carrying a powerful warhead over considerable range at high speed: these torpedoes were launched from two quadruple launchers, and eight reload weapons were stored in a centreline deckhouse. The primary armament layout was retained for all future Japanese destroyers up to the end of World War II.

Wartime additions
War experience revealed that the anti-aircraft armament of the class, which initially comprised just four 25-mm cannon in two twin mounts, was wholly inadequate: X turret was removed from surviving vessels in 1943/44, as it was in most other Japanese destroyer classes, to allow a heavier light AA armament to be shipped. This took the form of triple 25-mm Type 96 mounts (three new and two replacement) raising the cannon armament to 15 weapons. From June 1944 the rampant nature of the US Navy’s air power was reflected in the further strengthening of the four surviving ships to a total to between 15 and 28 Type 96 cannon and four 0.51-in (13-mm) Type 93 machine guns, one set of four reload torpedoes being sacrificed to prevent top-heaviness.

As completed, the ships carried 16 depth charges, but the capability of the US submarine arm was at least as potent as that of the US carrierborne air arm by 1943, and the original mine apparatus at the stern was removed and the anti-submarine capability improved, albeit only slightly, in 1943/44 by the addition of four throwers for 36 depth charges. The last four surviving vessels were also equipped with Type 13 air warning and Type 22 surface warning radars.

Class totally lost
During the war the ‘Asashio’ class destroyers were used largely for the defence of elements of the Combined Fleet. Arare was attacked by the US submarine Growler and sunk off Kiska island during the Aleutian islands campaign on 5 July 1942, when Kasumi was also heavily damaged together with another destroyer. Asashio and Arashio escorted the 7th Cruiser Division in the Battle of Midway (May/June 1942), when both were damaged by air attack. Although repaired and returned to service, both were sunk in 1943 when a large Japanese transport force was destroyed by US warplanes in the Battle of the Bismarck Sea. Michishio, Asagumo and Yamagumo were all torpedoed by the US destroyer McDermott and lost in the Battle of Leyte Gulf (October 1944). Kasumi, the last of the class to be laid down, served as escort on the attack on Pearl Harbor and joined the super-battleship Yamato during Operation ‘Ten’ against the US fleet off Okinawa (April 1945), and was so badly damaged that she was scuttled. 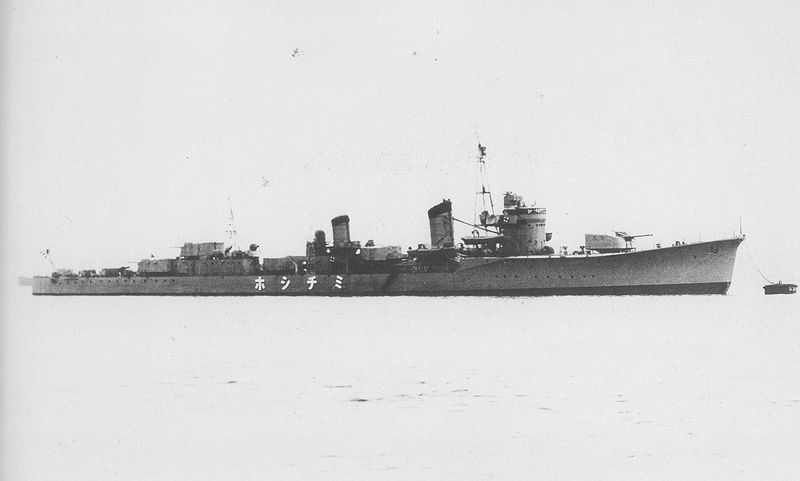