Early in 1952, Dassault received a contract from the French air ministry – which was becoming concerned about the increasing cost of modern fighters – to study the feasibility of a lightweight fighter in the form of a delta-winged variant of its Mystère fighter. The company accordingly began preliminary work on such a concept under the designation MD.550 Mystère Delta.

The company’s initial proposal was for a research type which could later be developed into an interceptor. This Mystère Delta was to be based on the powerplant of one Rolls-Royce Avon RA.7R or SNECMA Atar axial-flow turbojet engine with afterburning, the basic fuselage of the Mystère IV fighter complete with its nose inlet but without its horizontal tailplane, a delta wing spanning 26 ft 10.75 in (8.20 m) with a leading-edge sweep angle of 62° and a thickness/chord ratio of 5.5%, and a single-skid landing gear unit that would have been replaced in a proposed naval variant by tricycle landing gear. At a weight 10,362 lb (4700 kg) the proposed type was estimated to offer a maximum speed of Mach 1.3 and a climb to 39,370 ft (12000 m) in a mere 2 minutes 0 seconds.

By 1953, the company had evolved a related version as the MD.560 Mystère Delta with an armament of one comparatively large air-to-air missile carried externally below the fuselage, radar with its antenna above the nose inlet, tricycle landing gear, a vertical tail surface resembling that of the Vought F8U (later F-8) Crusader, a wing spanning 22 ft 7.75 in (6.90 m), a maximum take-off weight of 10,362 lb (4700 kg), and a hybrid powerplant which combined one Atar 101G turbojet engine rated at 9,259 lb st (41.19 kN) with afterburning with one SEPR liquid-propellant rocket motor rated at 1,323 lb st (5.88 kN) for boosted power at high altitude. The MD.560’s estimated performance included a maximum speed of Mach 1.8 and a climb to 49,215 ft (15000 m) in 2 minutes 0 seconds.

In the summer of 1953, Dassault offered the MD.560 Mystère Delta to the French air force in three forms with a powerplant of one Atar turbojet engine, or two Armstrong Siddeley Viper axial-flow turbojet engines, or two Viper engines and a rocket booster. Dassault recommended the last powerplant, and in anticipation of an order, secured a licence to manufacture the Viper as the MD.30 or, in its afterburning form, the MD.30R.

Thus the company was well placed when, in January 1954, the air ministry responded to the lessons of the air campaign during the Korean War (1950/53) with a requirement for an all-weather point interceptor (manned or unmanned) to weigh no more than 8,818 lb (4000 kg); to carry an armament of one Matra AAM weighing about 441 lb (200 kg); to attain a performance whose two main parameters were a maximum dash speed of Mach 1.3 and sustained level speed in excess of Mach 1.0; and a climb to 59,055 ft (18000 m) in less than 6 minutes 0 seconds. The air ministry was prepared to be very flexible in the matter of a powerplant, and allowed that this could be the Atar engine, other light turbojet engines, liquid-propellant rocket motors or solid-propellant rocket motors, or even a combination of these engines.

This requirement elicited six proposals. The Breguet Br.1002, Morane-Saulnier MS.1000 and Nord Harpon were soon eliminated from the running, and the air ministry then ordered pairs of prototypes of each of the other three designs, namely the Mystère Delta, the Sud-Est SE.212 Durandal and the Sud-Ouest SO.9000 Trident. Dassault thought that the air ministry was asking for too much in so light and therefore so small an airframe, for size and weight considerations meant that the type could carry radar or an AAM but not both even though the required all-weather capability really demanded radar, but the company nonetheless persevered with the construction of two MD.550 Mystère Delta prototypes that were somewhat different from the earlier concept of the same name in the adoption of conventional tricycle landing gear with a single wheel on each unit, a long needle nose, a V-type windscreen, two lateral air inlets just alongside and below the cockpit, two jetpipes, and a large vertical tail surface with an unswept trailing edge and inset rudder.

The first of these aircraft recorded its maiden flight on 25 June 1955 as a very trim low-wing delta monoplane of conventional light alloy construction with a powerplant of two MD.30 engines each rated at 7.35 kN (1,653 lb) dry, a span of 7.30 m (23 ft 11.5 in) and a maximum take-off weight of 11,177 lb (5070 kg). This prototype was really a research type, as the French aircraft industry had little experience with supersonic aircraft – and even less with the delta-wing planform in which longitudinal and lateral control was affected respectively by collective or differential movement of the elevons fitted on the wing’s trailing edges.

The Mystère Delta could be accelerated to Mach 1.15 in a shallow dive, but it was clear from the beginning of the programme that higher performance could be attained with an uprated powerplant. After initial trials, therefore, the Mystère Delta was upgraded to Mirage I standard with a revised windscreen, a centreline hardpoint for one AAM, wingspan reduced by 10.5 in (0.267 m), the fuselage slightly shortened, the vertical tail surface reduced in chord and fitted with a swept trailing edge, and the powerplant uprated in the form of two MD.30R engines each rated at 2,160 lb st (9.61 kN) with primitive afterburning characterised by ‘eyelid’ type nozzles and, in a ventral fin, one SEPR 66 rocket motor rated at 3,373 lb (15.00 kN).

The Mirage I recorded its maiden flight in December 1956 at a maximum take-off weight of 11,023 lb (5000 kg), and in this form attained high-altitude maximum speeds of Mach 1.6 and 1.3 with and without the rocket motor respectively. The second prototype was to have been the Mirage II with armament capability, Dassault Aladin radar, and the powerplant of two Turbomeca Gabizo turbojet engines each rated at 3,307 lb st (14.71 kN) with afterburning and two rocket motors each rated at 1,653 lb st (7.35 kN). Early in 1956, however, belated recognition of Dassault’s fears about the MD.550’s inadequate size resulted in the cancellation of the Mirage II when the airframe was only partially complete. By this time Dassault already had on the drawing boards two improved models, namely the Mirage III with the powerplant of one Atar afterburning engine in an area-ruled fuselage incorporating simple yet effective variable-geometry lateral inlets, and the Mirage IV improved multi-role fighter. The potential of this last persuaded the air ministry that the originally envisaged light fighter lacked the developability that would permit its evolution into a truly effective warplane, and in 1956 the requirement was modified to provide a multi-role fighter fitted with radar. 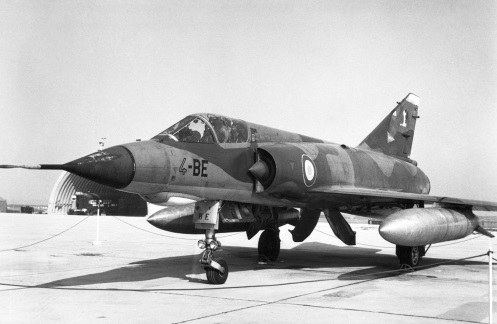 Only Dassault was in a position to provide such a type, and the company decided to develop the Mirage III to fulfil this requirement while enlarging the Mirage IV to create a strategic medium bomber.

“A sizeable number of Mirage IIIEs were built for export, being purchased in small quantities by Argentina, Brazil, Lebanon, Pakistan, South Africa, Spain, and Venezuela. Each had its own sub-type and country designation, with minor variations in equipment fit.” 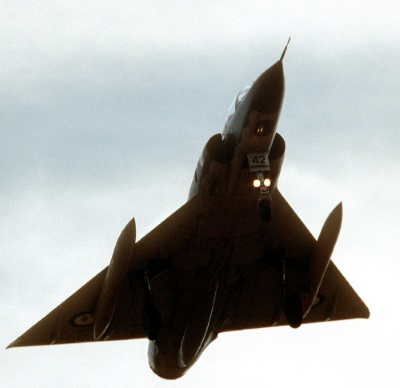 Type: experimental aeroplane for use as a lightweight interceptor fighter prototype

Fuel: internal not available; external none; no provision for inflight refuelling