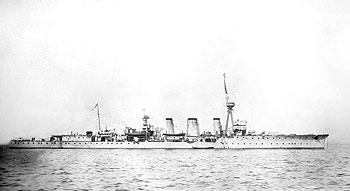 In its original guise as a sailing ship, the cruiser (sometimes rendered cruizer) was a fourth-rate ship or large frigate that was generally detached from the main fleet to sail independently in search of the enemy, whose position was then reported back to the fleet so that a major engagement could be brought about. The term cruiser was also employed for frigates and smaller vessels operating independently against the enemy’s maritime lines of communication in what is generally known as the ‘guerre de course’ role. In both these tasks, the essential requirement of a successful cruiser was its ability to sail better than any prospective enemy, especially in terms of speed and ability to point high into the wind. All this changed with the advent during the middle part of the 19th century of steam propulsion, and of iron (later steel) construction and protection. At this time cruiser ceased to be a generic name for any warship acting independently of the main fleet and became a type of warship in its own right. The pure cruiser came into existence during the middle and later parts of the 19th century in four basic types, namely the armoured cruiser with a displacement of up to 14,600 tons and a high level of protection matched by an armament of powerful guns, and the protected cruiser that was built in three subclasses with horizontal deck armour but no vertical belt armour, as well as the supplementary protection and survivability offered by the arrangement of the coal bunkers on the sides of the ship along the waterline and the compartmentalisation of the hull’s interior spaces. In descending order of size, these three subclasses were the first-, second- and third-class protected cruisers with maximum displacements of 14,200, 6,000 and 3,000 tons respectively.

The British built a total of 136 cruisers of these ‘pre-Dreadnought’ types in the form of 35 examples of the armoured cruiser and 21, 51 and 29 examples respectively of the first-, second- and third-class protected cruisers. The armoured cruisers were intended to provide a scouting capability within sight of the Royal Navy fleets to which they were attached, and also to serve as the flagships of overseas squadrons in areas that did not need the combined political and naval power represented by a battleship, while the tasks of the three subclasses of protected cruiser were the protection of British merchant shipping as it plied the seas of the world, the escort of convoys of troopship on their way to and from various parts of the British empire, and the provision of a ‘naval outpost’ capability in less advanced parts of the world. By the outbreak of World War I in August 1914, 51 of these older ships had been deleted or reduced to non-combatant status, and another seven had been converted into minelayers. It is also worth noting that the Royal Navy also possessed 10 small cruisers with a displacement of up to 1,850 tons.

The evolution of the cruiser through the second half of the 19th century paralleled that of the battleship. The type started as a wooden vessel: to this core were first added both a layer of protective armour and steam machinery to supplement the three-masted ship rig with its full complement of sails; then came a progression of interim stages in which iron and then steel became the primary structural medium and the steam propulsion system gradually superseded the sailing rig; and finally the cruiser reached the point at which the masts survived only in vestigial form to provide the means of hoisting flags and carrying control tops, and the main armament comprised a mixed assortment of breech-loading weapons in which the largest-calibre guns were carried in trainable turrets, the intermediate-calibre guns were installed in casemates, and the smallest-calibre weapons were carried on open mountings with perhaps a shield as the only protection for the gun’s crew. The three main weapons carried by British cruisers were the 9.2-in (234-mm) gun firing a 380-lb (172-kg) shell, the 7.5-in (191-mm) gun firing a 200-lb (91-kg) shell, and the 6-in (152-mm) gun firing a 100-lb (45-kg) shell. 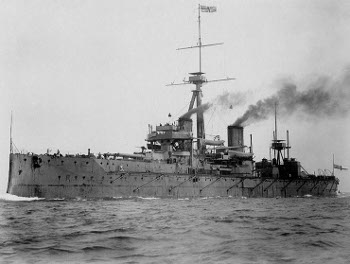 These ships were rendered obsolete by the development of the ‘Dreadnought’ type of capital ship and comparable evolution in the warships of smaller types, but were still in extensive service on the outbreak of World War I. The armoured cruisers were generally retained for service in home waters until their losses up to and including the Battle of Jutland in May 1916 revealed their terrible weakness against the longer-ranged and considerably heavier shells of more powerfully armed opponents. The protected cruisers, on the other hand, had already served a useful function, and continued to do so, in their activities in overseas waters in the pursuit and destruction of Germany’s merchant raiding force. The ships of this type were also very useful later in World War I, when they were used for the convoy escort role in the North Atlantic. A major turning point in the design of cruisers came in 1904/05 with the advent of the ‘River’ class of light warships, in which the torpedo boat and torpedo boat destroyer finally came of age as a single type offering a genuine ocean-going rather than merely coastal or at best sea-going capability. The new ocean-going destroyer was a far greater threat to major surface forces than the earlier coastal or even sea-going torpedo boat, and the commanders of major surface forces now had to take into consideration the possibility of massed attacks by torpedo-firing ships using their speed and agility to evade destruction and thus close to torpedo range. The growing threat posed by the destroyer in the early part of the 20th century therefore called for the development of a new type of light cruiser that was light and fast enough to work with destroyer flotillas, for which it provided a command capability, and also fast enough and sufficiently well armed with quick-firing guns to operate in the defensive screen that provided the squadrons of larger warships with a first line of defence against attacks by the enemy’s destroyer flotillas.

The German navy also operated 17 protected cruisers approximating in overall capabilities to the British second-class protected cruisers, and of these it was the 10 ships of the closely related ‘Gazelle’, ‘Nymphe’ and ‘Frauenlob’ classes that were the most modern, all having been completed between 1899 and 1903 with a displacement of between 2,645 and 2,715 tons, a primary armament of 10 4.1-in (105-mm) guns and two 17.7-in (450-mm) torpedo tubes, protection in the form of a 2-in (50-mm) deck, and a speed of 21.5 kt on the 8,500 hp (6340 kW) delivered to two shafts by triple-expansion steam engines.

One reply on “The Cruiser (part 1): classic multi-role warship”