By the spring of 1940, the new Junkers Jumo 211J-1 liquid-cooled inverted V-12 engine was ready for service, and the Junkers design team set about evolving a development of its Ju 87B to make the best possible use of this engine, which offered not only greater power but also the possibility of a considerably cleaner installation. This was achieved by the relocation of the oil cooler from its original position above the engine to a small chin radiator which assumed the position of the water cooling radiator, itself now split into two sections which were relocated to the undersurfaces of the inner wing panels. Other changes effected in the new variant were a complete redesign of the cockpit enclosure to reduce its drag, a reduction in the size and complexity of the main landing gear fairings, an increase in the internal fuel capacity though the adoption of the outer wing auxiliary tanks pioneered in the Ju 87R long-range version of the Ju 87B, the improvement of crew protection through the introduction of more and thicker armour plate, the doubling of the defensive firepower by the replacement of the 0.312 in (7.92 mm) MG 15 one-barrel machine gun by an MG 81z two-barrel machine gun of the same calibre, and the strengthening of the lower fuselage and attached crutch for the ability to carry, as an overload item, one 3,968 lb (1800 kg) SC-1800 or PD-1800 bomb. 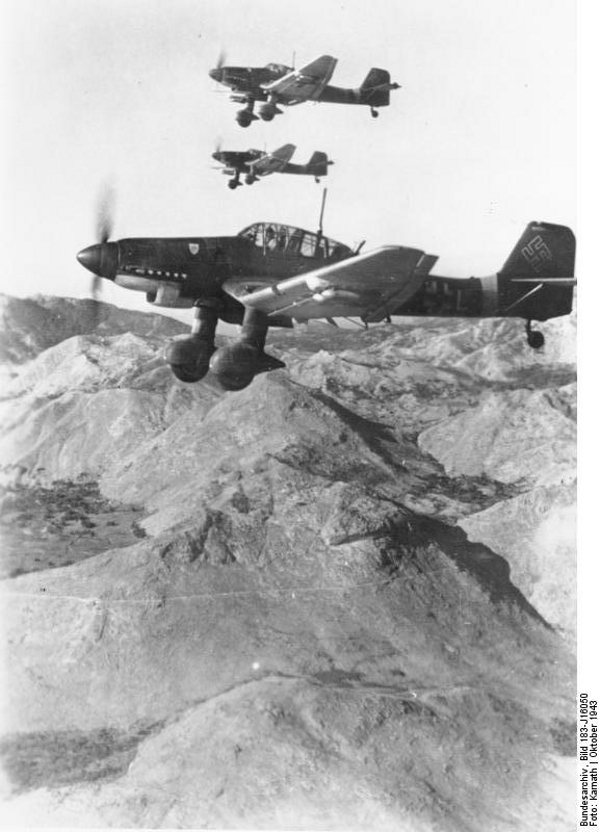 The first of the new breed was the Ju 87D-1 that began to replace the Ju 87B-2 on the Stuka production line from the spring of 1942. The Ju 87D was at this time a low-priority type as the Luftwaffe considered it only an interim warplane, for the service planned the debut of more advanced aircraft considerably better optimised for the Schlachtkampfflugzeug (close air support) role that was now replacing the Sturzkampfflugzeug (dive-bomber) role for which the Ju 87 had been conceived in the first half of the 1930s. Thus deliveries of the Ju 87 dropped from 70 per month in January 1941 to a mere two in November 1941 for a year total of 476 aircraft. It then became clear that the new attack aircraft would not be available for production and service in the immediate future, and as a result production of the Ju 87 was boosted once more from a time in January 1942: deliveries in the course of this year totalled 917 aircraft. The Ju 87D-1 appeared in operational service in the spring of 1942 over the Eastern Front and, in its Ju 87D-1/Trop form with dust/sand filters and a pack of desert survival equipment, over North Africa.

Short operational career
The sharply rising pace of production meant that the Stukagruppen (dive-bomber wings) were able to convert from the wholly obsolete Ju 87B-2 to the more advanced Ju 87D-1 in the course of the spring and summer of 1942, many of these units receiving the Ju 87D-2 subvariant that was built in parallel with the Ju 87D-1, from which it differed only in its strengthened rear fuselage and tailwheel unit, the latter incorporating a tow hook for cargo gliders. Toward the end of 1942, the Ju 87D-1 and Ju 87D-2 were phased out of production after suffering increasingly heavy losses to the ever more rampant and advanced fighters fielded by the Soviets over the Eastern Front and by the British over North Africa.

The place of these two closely related models was taken on the production lines by the Ju 87D-3 that was the first variant of the family fully optimised for the now-vital close air support role with increased armour protection for the crew, engine and radiator. Despite its optimisation for this new low-level role, however, the Ju 87D-3 retained the dive brakes of its predecessors. Consideration was also given to the use of the Ju 87D-1 and Ju 87D-3 in the torpedo role, but although a small number of the aircraft were converted to this role with the revised designation Ju 87D-4, none of them was used operationally and the aircraft were later converted back to Ju 87D-3 standard.

No adequate replacement
Despite its losses, the Ju 87D was retained in service for lack of any adequate replacement, and thought was given to a way of reducing the ever heavier wing loading that was degrading the warplane’s manoeuvrability, which was in real terms its only possible defence against fighter attack. This led, early in 1943, to the advent of the Ju 87D-5 variant with extended outer wing panels that resulted in a span of 49 ft 2.5 in (15.00 m) with area of 362.76 sq ft (33.70 m²), with the jettisonable main landing gear units that had featured in the Ju 87C-0 and, in later aircraft, with the dive brakes finally omitted as entirely superfluous to the Ju 87D-5’s role. Even as the Ju 87D-5 was entering service, however, the crews of the Stukagruppen operating over the Eastern Front were finding it impossible to operate by day as the Soviet air force now enjoyed a qualitative as well as quantitative advantage over the Luftwaffe. Thus the Ju 87 was relegated to nocturnal operations except in the few areas in which the Luftwaffe could occasionally gain local and transient air superiority.

The Ju 87D-8 was produced in parallel with the Ju 87D-7, from which it differed only in its lack of advanced night-flying instrumentation and flame-damper tubes, and these were the two last variants to be built before production of the Ju 87 series finally ended in September 1944 after the delivery of more than 5,700 aircraft, including 1,844 in 1943.

From mid-1940, the Junkers design team had devoted considerable effort to evolving a more modern successor for the Ju 87. The Technische Amt (technical department) of the Reichsluftfahrtministerium (Reich air ministry) demanded a major increase in offensive capability coupled with improved defensive armament. Initial studies were launched under the designation Ju 87F, this proposed all-metal variant being based broadly on the airframe of the Ju 87D but envisaging the use of a substantially strengthened main landing gear units carrying wheels with oversize tyres, a wing of greater span and area, and the appreciably more powerful Jumo 213 liquid-cooled inverted V-12 engine.

The same but different
The initial Ju 87F proposals submitted to the Technische Amt in the spring of 1941 were rejected on the grounds that they offered an inadequate improvement over the existing Ju 87D, and increased performance was requested. At this stage, Junkers began a more extensive redesign in which greater attention was allocated to aerodynamic cleanliness. The wing was revised and, while retaining the characteristic inverted-gull configuration featured by all versions of the Ju 87, adopted a simplified planform, continuous taper being applied to both leading and trailing edges, and the span of the centre section being increased. Simultaneously, fully retractable main landing gear units were introduced, the main members swivelling through 90° and retracting rearward into bays in the underside of the wing, and serious consideration was offered to a rotating vertical tail surface. When rotated down this would have given the gunner, armed with a rear gun, a considerably enhanced field of fire. It is not known how the aeroplane would have handled with the tail rotated.

Boosted cannon armament
As the inefficiency and increasing ineffectiveness of standard bombs against steadily more heavily armoured tanks became clear to the Luftwaffe in 1942, serious consideration was belatedly given to the adoption of a more capable anti-tank weapon for the Ju 87, which was now the service’s primary anti-tank weapon. The obvious solution was a high-velocity cannon firing a moderately large projectile, and in 1942 the Luftwaffe ordered the conversion of the 37 mm FlaK 18 light anti-aircraft gun for carriage in an underwing pod. The revised weapon was the BK 3,7 which, with its magazine and long spent case ejector chute, was installed in a pod that could be installed under the wing of the Ju 87 immediately outboard of the main landing gear legs on hardpoints that could carry bomb racks if the cannon pods were not installed.

The new armament system was evaluated with considerable success during the summer of 1942 on a Ju 87D-3 conversion, and the type was ordered into production as the Ju 87G-1 for full service from the autumn of that year. The type was originally operated by the specially formed Panzerjägerstaffel (tank destroyer squadron) on the Eastern Front, and its success led to the addition of one similar squadron in each of Schlachtgeschwadern 1, 2 , 3 and 77, as Stukageschwadern 1, 2, 3 and 77 were redesignated in October 1943. Although the BK 3,7 cannon was effective against the Soviet tanks of the period, the Ju 87 was completely obsolete in the face of modern fighter opposition and was replaced as soon as possible for day operations by specialised variants of the Focke-Wulf Fw 190. Surviving aircraft were passed to the Nachtschachtgruppen (night attack wings), and by the autumn of 1944 only one Gruppe was still operating the Ju 87G-1 in the day role.

Two-seat trainer conversions
From 1943 a number of Ju 87D machines were adapted as Ju 87H dual-control trainers for use in the conversion of fighter and bomber pilots to the close support and anti-tank roles. The conversion involved the removal of all armament, the addition of dual controls, and the revision of the rear part of the cockpit canopy with side blisters so that the instructor in the rear seat could obtain at least a measure of forward view. Ju 87D-1, Ju 87D-3, Ju 87D-5, Ju 87D-7 and Ju 87D-8 aircraft converted in this way received the revised designations Ju 87H-1, Ju 87H-3, Ju 87H-5, Ju 87H-7 and Ju 87H-8 respectively.

Accommodation: pilot and radio operator/gunner in tandem in the enclosed cockpit