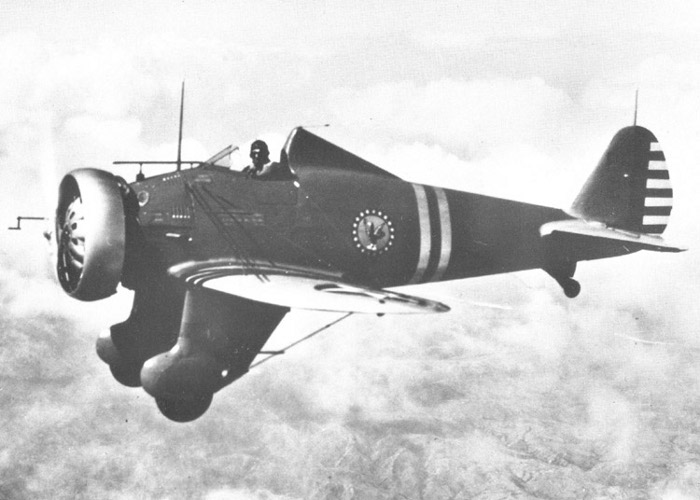 The nature of the Boeing P-26 as a classic fighter of the transitional period between the braced biplane and the cantilever monoplane is revealed by a number of its salient characteristics: the ‘Peashooter’, as the type was generally known, was the last fighter placed in production by Boeing and also the last accepted for service with the US Army Air Corps with an open cockpit, fixed landing gear and an externally braced wing; it was also the first US fighter with an all-metal structure and a monoplane configuration.

The origin of the type can be traced to 1931, when Boeing was producing the closely related P-12 and F4B series of biplane fighters for the USAAC and US Navy respectively. With these types in production but also approaching the end of their development potential, Boeing started to consider a new basic design that would draw on the company’s increasing experience with stressed-skin metal construction and the monoplane layout, as typified by its latest civil aircraft, and created a design intended to appeal specifically to the USAAC. After discussion with the USAAC, which suggested a number of features to be incorporated in the new design, Boeing in September 1931 proposed a small monoplane fighter based on the powerplant of one well-tried Pratt & Whitney R-1340 Wasp air-cooled nine-cylinder radial engine but in combination with a modern semi-monocoque metal fuselage with less advanced features such as an externally wire-braced metal monoplane wing and tailwheel landing gear with fixed but nicely faired main units. Despite its experience with cantilever structures (Model 205 fighter) and retractable landing gear (Model 200 Monomail transport), Boeing felt that external bracing would offer the probability of a lighter wing structure, that wire rather than strut bracing would provide the advantages of further reduced weight and less drag, and that the additional drag of the fixed main landing gear units would be more than offset by a simplified and lighter structure which also provided the anchorage points required by the flying wires.

The USAAC was cautious about the new type, and in December 1931 contracted to provide the engines and instrumentation for three Model 248 prototypes, which Boeing would build at its own expense. The contract also called for Boeing to finance the initial flight trials before the aircraft were passed to the USAAC for evaluation under the military designation XP-936. Final design of the Model 248 was already well advanced by this time, and Boeing began construction in January 1932. As orders for new aircraft were difficult to obtain during the Depression years of the early 1930s, Boeing put a major effort into this ambitious type and completed the first prototype in the remarkably short period of two months. The Model 248 was based on a trim fuselage that was of circular section in the engine area but translated into an oval section farther to the rear, and this supported a cantilever tail unit with plain control surfaces, and also the flat centre section of the low-set wing complete with the fixed main units of the landing gear, which were each braced inward by twin wires to the lower longeron on the other side of the fuselage. The dihedralled outer wing panels were based in a two-spar structure and of constant thickness and chord to their semi-elliptical tips, and on the outboard ends of their trailing edges carried ailerons. Two sets of twin flying wires extended upward and outward from the lower ends of the main landing gear units to the underside of the spars at about the mid-span point of the ailerons, while twin forward and single rear sets of landing wires extended outward and downward from the upper sides of the fuselage just ahead of the cockpit, giving the pilot excellent fields of vision. The empennage was a cantilever structure with single horizontal and vertical surfaces, the former comprising a tailplane and two tabbed elevators, and the latter a fin and rudder with an external trim tab. The landing gear was of the fixed tailwheel type with the spatted main wheels carried by oleo-pneumatic shock absorber legs covered by long-chord fairings, and the tailwheel located under the rear fuselage in a neat fairing that left only its lower half exposed.

The first XP-936 recorded its maiden flight on 20 March 1932 with the powerplant of one R-1340-21 (SR-1340-E Wasp) engine rated at 520 hp (388 kW) at 10,000 ft (3050 m) and driving a two-blade metal propeller whose blades could be adjusted in pitch on the ground. While two of the machines were soon passed to the USAAC for testing the third was demonstrated to the US Navy and then used for static tests. Early trials revealed that the XP-936 handled well in the air and, with only 20 hp (14.9 kW) more power than the contemporary P-12F biplane fighter, possessed a maximum speed that was 23.4 kt (27 mph; 43.4 km/h) faster and an initial climb rate that was 476 ft (145 m) per minute greater. The USAAC soon bought the XP-936 prototypes, which then received the revised designation XP-26 that was later changed to the service test designation Y1P-26 and finally to the service designation P-26. Tests of the two flying prototypes continued though most of 1932, and in November of that year the USAAC released the specification for a new fighter based on the Model 248 design. 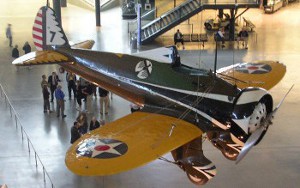 This was the P-26A created as the Model 266, and in January 1933 Boeing received a contract for 111 (later 136) of these aircraft. The Model 266 differed only in small external details from the Model 248, the most obvious changes being a curtailment of the main landing gear fairings so that the wheel coverings did not extend to the rear of the leg fairings, a revision of the wing that added 6.5 in (0.165 m) to its span but reduced its area by 0.50 sq ft (0.0465 m²) and, as a retrofit, an 8 in (0.203 m) heightening of the pilot’s head rest to provide protection if the fighter turned over on landing. Internal changes were more extensive, and included a revised wing structure and the addition of military equipment such as radio and an oxygen system in the fuselage, and flotation gear in the wing roots.

Pilots were enthusiastic about their new mount not just for its performance but also for its delightful handling, which was characterised by light and sensitive controllability. The one major objection to the P-26A as an operational type flown by ordinary service pilots was its high landing speed, itself derived from the type’s comparatively high wing loading, and a considerable improvement was later effected by the retrofit of small split flaps on the wings’ trailing edges between the ailerons and the centre section: these reduced the landing speed from 71.6 kt (82.5 mph; 132.75 km/h) to a more manageable 63.4 kt (73 mph; 117.5 km/h).

As the P-26A was withdrawn from USAAC service in the later 1930s, most of the aircraft based in the Panama Canal Zone and the Philippines were handed over to the air forces of those countries, and two were sold to Guatemala. In 1942 and 1943 Panama sold several of its aircraft to Guatemala, where the type remained operational up to 1956.

Of the 25 additional aircraft ordered to raise the P-26 total to 136 aircraft, the first two were delivered as P-26B machines to the Model 266A standard with a powerplant of one R-1340-33 fuel-injected engine rated at 600 hp (447 kW) and supplied from an internal capacity of 107 US gal (89.1 Imp gal; 405 litres). The first of these aircraft flew in January 1934, and the two machines were delivered in June of the same year after being used for validation of the revised powerplant and the trailing-edge flaps, which were pioneered in USAAC service on this variant.

After about one year in service, the aircraft were all revised to P-26B standard with the R-1340-33 fuel-injected engine. Replacement of the P-26 in fact began in 1936 with the advent of the Seversky P-35, and was accelerated in 1938 with the arrival of the first Curtiss P-36A fighters. The last aircraft were withdrawn from USAAF service in 1942. One squadron of the US Army Air Forces, as the USAAC had become in June 1941, was still operational on the P-26 in the Philippines at the time of Japan’s December 1941 attack that drew the USA into World War II.

First flown in August 1934, the Model 281 was the export version of the P-26A from which it differed only in its powerplant of one R-1340-33 engine and in the details of its equipment. The type was intended for sale mainly to countries whose warplanes often had to operate from poor airfields, and it was this fact that spurred development of the trailing-edge flaps, later introduced on American aircraft, to reduce take-off and landing speeds. One of the aircraft was delivered to Spain, where it saw limited service in the first months of the Spanish Civil War (1936-39) on the side of the Republican government, and the other 11 were sold to China. The first of these latter was destroyed in an accident during its maiden flight in September 1934, and the other 11 were delivered in the period up to January 1936. The aircraft provided part of the air defence of Canton, but their numbers were gradually eroded in action against the Japanese and the last aircraft had to be grounded for lack of spares.

The first ‘Peashooter’ variant to see combat was the Chinese Model 281. On 15 August 1937, eight aircraft of the Chinese air force’s 17th Squadron (3rd Pursuit Group), based at Chuyung airfield, engaged eight out of 20 Mitsubishi G3M medium bombers of the Imperial Japanese naval air force’s Kisarazu Kokutai sent to attack Nanking. The Boeing fighters helped shoot down two of the four Japanese bombers destroyed that day without suffering any losses. Subsequent engagements between the Chinese ‘Peashooters’ and Imperial Japanese navy air force units flying the Mitsubishi A5M fighter, which bore a strong visual similarity to the Boeing fighter, were the first dogfights between monoplane fighters in Asia.

At the time of the Japanese attack on Pearl Harbor in the Hawaiian islands and on the Philippine islands on 7/8 December 1941, which precipitated the US entry into World War II, the US fighter strength in the Philippines included 28 P-26 fighter, 12 of them operational with the 6th Pursuit Squadron of the Philippine Army Air Corps. Filipino-flown P-26 fighters claimed one G3M bomber and two or three Mitsubishi A6M2 ‘Zero’ fighters before the last of them were burned by their crews on 24 December 1941.

Following Pearl Harbor, the US P-26 strength was just nine P-26 fighters in the Panama Canal Zone. In 1942/43, the Fuerza Aérea de Guatemala acquired seven P-26 machines, and the last two of these were still airworthy in 1956, when they were replaced by North American P-51 Mustang fighters. The P-26’s last combat operation was with the Guatemalan air force during a 1954 coup.