The Tank, Heavy, TOG 1 was a British heavy tank produced only in prototype form early in World War II in the expectation of some officers that the battlefields of the new war would be similar to those of World War I on the Western Front. As a result, thinking turned to a super-heavy tank which would be able to move across muddy terrain (due to heavy rain) which was pocked by shell craters, and also to crush barbed wire entanglements and cross trenches. A single prototype was built, but interest in the type disappeared rapidly after another cross-country design, the Tank, Infantry, Mk IV, Churchill, revealed good performance and it became clear that conditions comparable to those of World War I were unlikely to materialise given the success of highly mobile armoured operations. 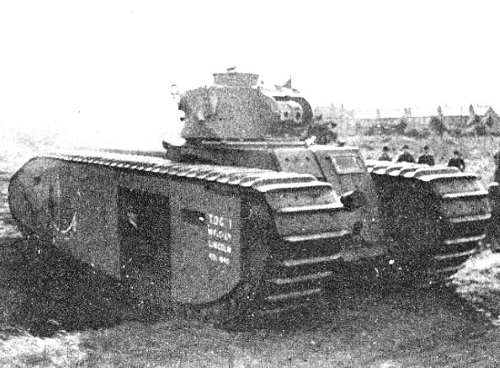 In July 1939, less than two months before the start of World War II, the Special Vehicle Development Committee was established to plan the design of tanks suitable for conditions similar to those of World War I. The committee’s chairman was Sir Albert Stern, who had been a member of the original Landships Committee and head of the Tank Supply Depot during World War I. The SVDC included other men who had been instrumental in the development of the tank in World War I, notably a former Director of Naval Construction, Sir Eustace Tennyson d’Eyncourt; the tank pioneer General Ernest Swinton; the engine designer Harry Ricardo; and the gearbox and transmission expert Major Walter Gordon Wilson. Almost inevitably, the team received the nickname ‘The Old Gang’, and the resulting TOG acronym was applied to their designs.

The SVDC proposed the design of a super-heavy tank, entrusting this mission to another pioneering tank designer, Sir William Tritton of the William Foster & Co. Ltd. of Lincoln. The specification for the new behemoth was very precise and all-embracing: the new tank was to be capable of operating across waterlogged terrain shattered by shellfire, to be able to withstand the fire of 47-mm anti-tank guns and 105-mm (4.13-in) pieces of artillery at a range of 100 yards (91 m), and to carry as its armament a 75-mm (2.95-in) field howitzer firing shells effective against reinforced concrete 7 ft (2.1 m) thick, two 2-pdr (40-mm) guns and four 7.92-mm (0.312-in) Besa machine guns. The main gun was to be located in the front of the hull, the two 2-pdr weapon in lateral sponsons, and the machine guns as single weapons in the front, the sponsons and the rear to provide protection against infantry attack. To provide cover, four 2-in (51-mm) smoke mortars were to be included.

A team led by Mr W. Rigby of the Foster company began work on the Tank, Heavy, TOG I during February 1940. The new type was designed with good trench-crossing capability as a major feature, and also with the ability to carry infantry, so the design emerged as what was in many wars an updated and enlarged version of the British tanks of World War I, with a large hull possessing side doors, and was driven by broad tracks running right round the hull in the manner of World War I tanks: the 25 wheels on each side were unsprung, the two drive sprockets were at the rear, and the two idlers were at the front.

The TOG I prototype was completed for its initial trials during October of the same year, and differed from the original concept in having no sponsons and a single 2-pdr gun in the turret of a Tank, Infantry, Mk I, Matilda. The 80-ton vehicle was powered by a Paxman Ricardo 12TP water-cooled Diesel engine delivering 600 hp (447.5 kW), and the transmission and steering were effected by English Electric generators and motors.

After problems with the electro-mechanical drive, the TOG I was taken in hand for conversion with a hydraulic drive designed by Fluidrive Engineering, a process that took until May 1943 and resulted in a modified version known as the TOG IA. The revised prototype prototype was sent to Chobham for trials, and then disappeared from history.

Even before the TOG I had been built, it had been appreciated that the concept of the tracks running right round the side elevation of the hull was not necessary and indeed obsolete, and that the overall height of the hull was too great. In June 1940 work had therefore begun on an improved vehicle, the Tank, Heavy, TOG II, with a lower hull and lower track return run, and the side doors above rather than below the track return run. This second prototype was ready for its initial running trials in March 1941 with a power unit and transmission/steering arrangement similar to those of the TOG I, though with twin generators in place of the original model’s single generator. No running problems were encountered with the TOG II. 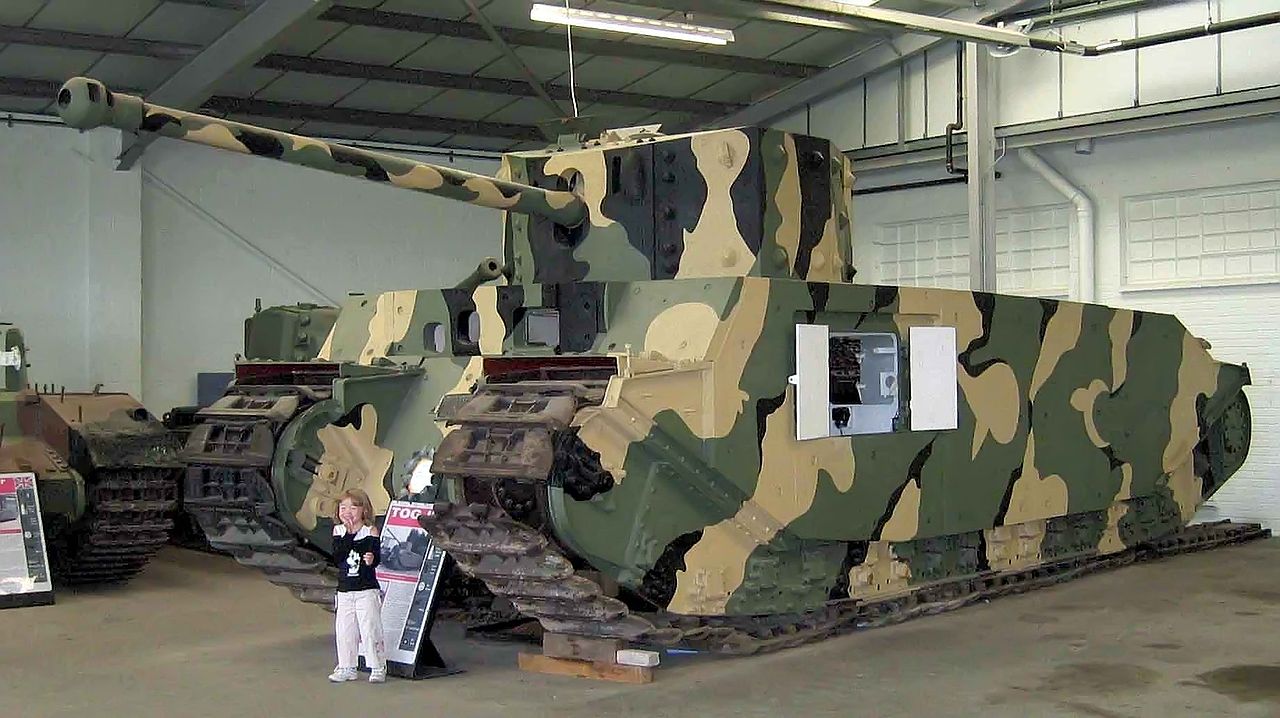 The 80-ton TOG II retained other TOG I features, but had its armament concentrated in a turret, which was that of the Tank, Cruiser, Mk VIII, Challenger with a 17-pdr (76.2-mm) high-velocity main gun and a Besa co-axial machine gun. The TOG II was later modified to TOG II* standard with torsion-bar suspension for the road wheels, and in this form was successfully evaluated in May 1943. By this time there was no operational need for the type, no production was ordered, and development came to an end, though a shortened version was suggested as the TOG II(R).

The high ratio of grounded track length to track centre distance made the TOG tanks very difficult to steer, and in combination with their great and obsolescent features, this spelled the end for the concept.

[Photos by Jedsite and Military Factory]