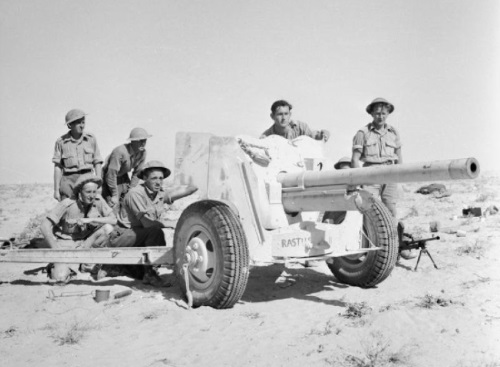 The Ordnance QF 6-pdr was a British 57-mm (2.24-in) gun which was the British army’s mainstay in the anti-tank role during the middle of World War II, and was also used as the main armament in several armoured fighting vehicles. It was first employed operationally in the North African campaign during April/May 1942, and quickly replaced the 2-pdr in the anti-tank role, allowing the 25-pdr to revert to wholly to its primary artillery role.

The tactical and technical limitations of the 2-pdr were evident when it entered service in the mid-1930s, and work of a replacement began as early as 1938 at the Woolwich Arsenal, which selected a 57-mm calibre for the new gun. Guns of this calibre had been used on British warships from a time late in the 19th century, so manufacturing equipment was available. Design work on the ordnance had been completed by 1940, and that of its associated carriage in 1941. Production had been authorised, but was then delayed by the needed to maintain the 2-pdr in production and service to offset the almost total losses suffered in the Battle of France. Thus production of the 6-pdr was delayed until November 1941.

Unlike the 2-pdr, the new gun was mounted on a conventional two-wheeled carriage of the split-trail type. The first mass-production variant was the Ordnance QF 6-pdr Mk II, which differed from the pre-production Mk I in having a shorter L/43 barrel as a result of the shortage of lathes for the manufacture of longer barrels. The later Mk IV had an L/50 barrel fitted with a muzzle brake. The equipment was fitted as standard with a forward shield but, while issued, the optional side shields seemed to have been little used.

The 6-pdr was used where possible to replace the 2-pdr in the current generation of British tanks, which thus required work on their turrets, pending the introduction of a new generation of tanks designed to take the 6-pdr. The Churchill Mks III and IV, Valentine Mk IX and Crusader Mk III, the latter two with the turret crew reduced by one man to allow the installation of the 6-pdr, began to enter service during 1942. The tanks designed to take the 6-pdr were the Cavalier, Cromwell and Centaur: when the Cromwell entered combat in 1944, however, it was armed with the Ordnance QF 75-mm gun, which was a redesign of the 6-pdr to take US 75-mm (2.95-in) ammunition and more useful against general targets. The 6-pdr was also fitted to the AEC Armoured Car Mk II.

The 6-pounder was kept competitive, at a steadily reducing level, through World War II, but in reflection of the fact that the Germans were steadily upgrading the protection of their tanks, and would no doubt continue to so so, work commenced with objective of developing a weapon with the same general dimensions and weight as the 6-pdr but providing improved performance. The first attempt was an 8-pdr L/59 weapon, but this was too heavy to be used in the same role as the 6-pdr. A second attempt was made with a shorter L/48 barrel, but this proved to have performance only marginally superior to that of the standard 6-pdr and the programme was cancelled in January 1943. The 6-pdr was followed into production and service during February 1943 by the next-generation 17-pdr, but as a smaller and more manoeuvrable gun, the 6-pdr in fact remained in British service not only for the rest of World War II, but also for some 20 years after the war.

In addition to the UK, the gun was also produced in Canada, South Africa where the Combined Ordnance Factories built 300 such weapons, and the USA. The notion of manufacturing the 6-pdr first found favour in the US Army Ordnance branch during February 1941 though, as at that time the US Army still preferred the 37-mm Gun M3, production was planned for Lend-Lease export. The US 57-mm Gun M1 was based on the 6-pdr Mk II, of which two examples were provided by the UK as patterns. As there was sufficient lathe capacity in the USA, however, the longer barrel could be produced from the start. Manufacture began early in 1942 and continued until 1945 for a total of 15,637 such weapons. The M1A1 variant used US Combat tyres and wheels, and from September 1941 the M1A2 introduced the British practice of free traverse (effected by the crew pushing and pulling on the breech) instead of solely geared traverse. The M1 was made standard issue in the spring of 1943. Once the M1 had entered US service, a modified towing point design was introduced to create the M1A3 for US service. 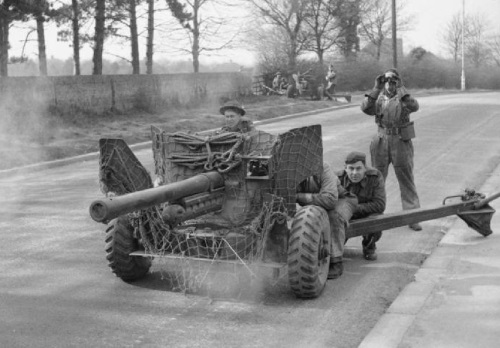 Some two-thirds of US production went to US Army divisions in Europe, about one-third was delivered to the UK, and 400 guns were sent to the USSR through Lend-Lease. When the USA rearmed Free French forces for the ‘Overlord’ and ‘Dragoon’ landing in Normandy and the south of France, their anti-tank units received US-fabricated M1 guns.

Like the British army, which trialled a 57-mm/42.6-mm) squeeze-bore variant for a higher muzzle velocity, the US Army also experimented with a squeeze-bore adaptor (57-mm/40-mm T10), but the programme was likewise cancelled. US ammunition design and production was slower than those of the gun, so at first only armour-piercing shot was the only type of ammunition was available. The HE shell was not available until after the Normandy landings and UK stocks were procured to cover its absence. Regular service in the US Army’s front-line units ended in the 1950s.

The 6-pdr and M1, of which 4,242 examples were received, were initially issued to the Royal Artillery anti-tank regiments, each of four 12-gun batteries, in infantry and armoured divisions for service in the western theatres, and later in the war to the six-gun anti-tank platoons of infantry battalions. An air-landing battalion had a combined anti-aircraft and anti-tank company with two four-gun anti-tank platoons. Formations and units in the Far Eastern theatres had a lower priority and different organisation reflecting lower tank threat posed by the Japanese forces. The gun was also employed by commonwealth forces. Initially the anti-tank ammunition was a basic armour-piercing (AP) shot, but by January 1943 an Armour-Piercing, Capped (APC) shot and an Armour-Piercing, Capped, Ballistic Capped (APCBC) shot was supplied. An HE shell was produced so that the gun could also be employed against unarmoured.

Variants of the 6-pdr anti-tank gun included the Mk I limited-production initial model with an L/50 barrel, the Mk II first mass-production version with a shortened L/43 barrel, the Mk 3 tank version of the Mk 2, the Mk 4 with an L/50 barrel and single-baffle muzzle brake, the Mk 5 tank version of the Mk 4, the Molins Class M 6-pdr gun fitted with automatic loader built by the Molins company and carried by some motor torpedo boats and de Havilland Mosquito warplanes, and the 57-mm Gun M1 US version based on the Mk II but with the L/50 barrel.

The British carriage types were the basic Mk I, the Mk IA with a different axle and wheels, the Mk II of  simplified design, and the Mk IV modified for use by airborne troops, while the US carriage types were the basic M1, the M1A1 with US wheels and tyres, the M1A2 of 1942 with an improved traverse mechanism allowing free traverse, the M1A3 of 1943 with a modified towing hook and the first version to be adopted by the US Army, the M2 of 1944 with a caster wheel added to the right trail, relocated trail handles and a new utility box, and the M2A1 of 1945 with improved elevation gear.

As well as the UK and its commonwealth partners, the 6-pdr was used by Brazil, France, Ireland, Israel, Netherlands, Pakistan, South Korea, USA and USSR. 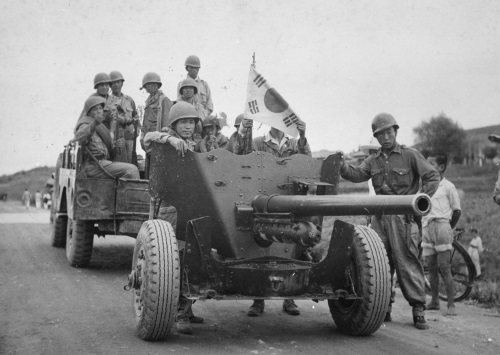