One of the major concerns of the Western Allies fighting Germany in World War II was that they would finally have to invade Germany from the west along a frontier protected by the ‘Westwall’, or ‘Siegfried Line’. This took the form of a line of concrete emplacements armed with artillery and anti-tank guns, and itself shielded by anti-tank defences (ditches and ‘dragon’s teeth’), minefields, barbed wire entanglements and machine gun strongpoints. The Allied consensus was that the Westwall, if as effective as it was believed to be, might prove a severe hindrance to a Western Allied advance into Germany, and both the UK and USA embarked on programmes to create super-heavy tanks able to survive an assault on the Westwall and play a key role in driving through these defences to create a gap through which conventional forces could debouch. 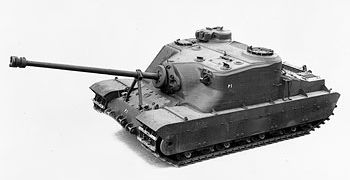 The British programme was based on the Tank, Heavy Assault, Tortoise (A39), which reached the prototype stage but did not enter mass production. The tank was developed for the task of clearing heavily fortified areas, and for this reason its design favoured armour protection and firepower over mobility and speed. Even so, though it weighed 78 tons and was not readily transportable, the Tortoise revealed in its trials that it was mechanically reliable and a good gun platform.

Early in 1943 the Allies anticipated considerable resistance to their planned future invasion of Europe, with the Germans eventually compelled to fall back through France to very heavily fortified positions such as the Siegfried Line. It was the anticipated need to punch through such defences which led to the emergence of a requirement for a new class of vehicles, the assault tank in which maximum armour protection was emphasised over mobility. Work was at first concentrated on the A33 Excelsior tank, which was based on the Cromwell tank, and there was also a programme to upgrade the protection of the Churchill tank with thicker armour. For similar work in the Far East against the Japanese, consideration was given to an A38 Valiant tank based on the Valentine tank, but logistical considerations meant that the weight of the new type was to be lower than any of the tanks considered for European operations.

In April 1943 the War Office and the Ministry of Supply issued a joint memorandum sketching in general terms rather than specifying in precise detail the specification for an assault tank. This was classified as a special-purpose vehicle to operate in heavily defended areas, and as such was to be a ‘funny’ of the type operated by Major General Sir Percy Hobart‘s highly specialised 79th Armoured Division. 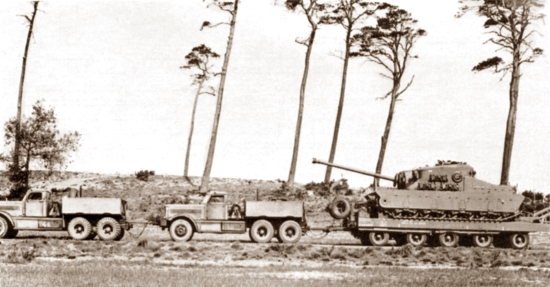 The Nuffield Organisation responded to the new specification with 18 designs (AT1 to AT18), which were drafted between May 1943 and February 1944 in a sequence in which each design was  both larger and heavier than its predecessor. By February 1944 the AT16 design was complete and offered to the Tank Board, which approved the design and proposed in the same month that 25 examples be produced directly from the mock-up stage without the intermediate and time-consuming prototype stage, so that the type could be made available for operational service in September 1945. An order for 25 such tanks was then placed and work was started on the finalisation of the design and the manufacture of components and assemblies. The war against Germany ended in May 1945, however, and at this stage the order was reduced and only six Tortoise tanks were completed by Nuffield Aero and Mechanization in 1947. One was sent to Germany for trials where it was found to be mechanically reliable and a potent and accurate gun platform, though its weight and height rendered it very extremely slow and difficult to transport.

As it had a fixed casemate superstructure (a single-piece casting) rather than a rotating turret, the Tortoise could be categorised as a self-propelled gun or assault gun rather than a tank in the latter’s purest sense. The seven-man crew comprised the commander, driver, gunner, two loaders and two machine gunners of whom one doubled as the co-driver.

The hull of the Tortoise was divided into three compartments for the transmission at the front, the crew in the centre, and the Rolls-Royce Meteor water-cooled V-12 engine, rated at 600 hp (448.5 kW), at the rear. The suspension was based, on each side of the hull, on four bogies each with two pairs of wheels, and each pair was linked to a transverse torsion bar. The Merritt-Brown transmission was fitted with an all-speed reverse capability, giving the Tortoise about the same speed backward as forward.

The Tortoise’s main armament was one example of the superb Ordnance QF 32-pdr gun; a 94-mm high-velocity weapon whose design was adapted from that of the British 3.7-in anti-aircraft gun. The weapon had been developed as a successor to the 77-mm Ordnance QF 17-pdr and used a separate charge and projectile: the latter was a 32-lb (15.52-kg) armour-piercing capped ballistic cap shot which left the muzzle at a velocity of 2,880 ft (878 m) per second or, according to other source, 3,050 ft (930 m) per second. Development of the 32-pdr gun was halted at the end of the war, and the 17-pdr gun was in fact replaced in tank use by the 20-pdr (84-mm/3.31-in) gun. In trials the 32-pdr gun proved successful against a German Panther battle tank at a range of almost 1,000 yards (915 m).

The 32-pdr gun was installed in a power-assisted mounting which offered only limited traverse (20° left and right of the centreline). Instead of being mounted on the more traditional trunnions, this gun protruded through a large ball mount in the front of the hull, protected by 225 mm (8.86 in) of armour. To the left of it was a 7.92-mm (0.312-in) Besa machine gun in an armoured ball mount. Another two Besa machine guns were mounted in a turret on the top of the hull to the right. 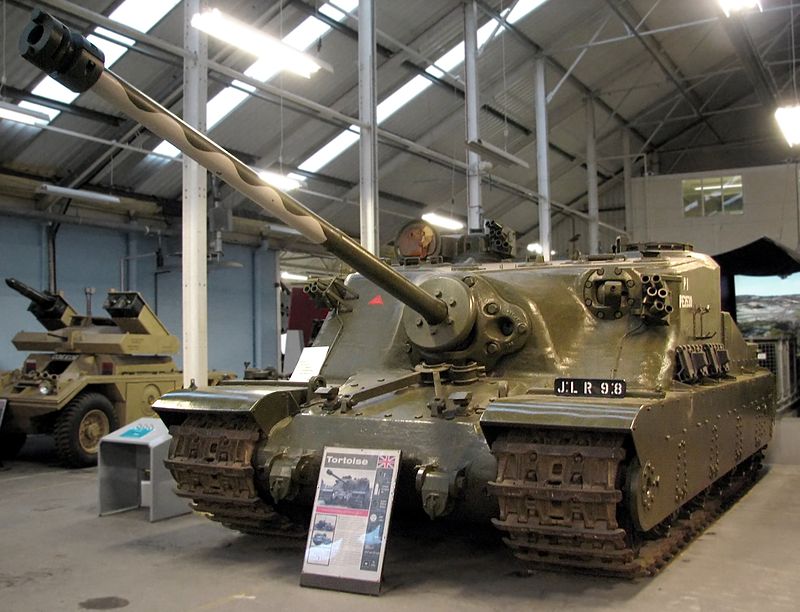