Now a product of the OtoBreda group, the Breda Twin 40L70 Compact naval 40-mm twin anti-aircraft gun mounting is a powerful medium-calibre point defence system using two licence-built Bofors 40L70 40-mm guns modified for fully automatic operation at high rates of fire. The system was designed specifically to provide small and medium warships with an unequalled gun capability against aircraft and anti-ship missiles, and is claimed to be the lightest and smallest 40-mm twin mounting in current service. It can be used in radar-controlled multiple mountings to provide a high level of protection in larger vessels, or as a single mounting for the secondary armament of smaller vessels requiring more modest levels of defence against aircraft and fast attack craft.

Automation provides both compact dimensions and rapid reaction under control of a high-grade fire-control system, while the ammunition capacity, typically 368 rounds per gun in the Twin 40L70 Compact Tipo A variant and 222 rounds in the Twin 40L70 Compact Tipo B variant optimised for smaller ships, allows the mounting to deal with a saturation attack, or with a succession of individual attacks, without the need for reloading, one of the few tasks associated with the mounting that requires human involvement.

The two 40-mm guns are mounted closely side-by-side inside the reinforced fibreglass turret, which has been carefully designed to be watertight as so to protect the mechanism inside it. Access to the turret for maintenance is provided by three hatches (one in the rear and one on each side). The guns are fed from the under-deck magazine, a circular assembly loaded via a hatch on each side. The nature of the magazine and feed system allows the crew to replenish the ammunition supply without undue difficulty between closely-spaced engagements. Four-round clips are used to load rounds into horizontal layers (seven in the Tipo A and four in the Tipo B) with a transport system to shift the rounds towards the two ammunition hoists (one on each side). Thus there is a separate feed/hoist mechanism for each barrel, which ensures that the system can continue to function in part even if one barrel is out of action. The action of the ammunition system is entirely automatic, and lifts rounds out of the magazine at the rate of four every 0.7 second. 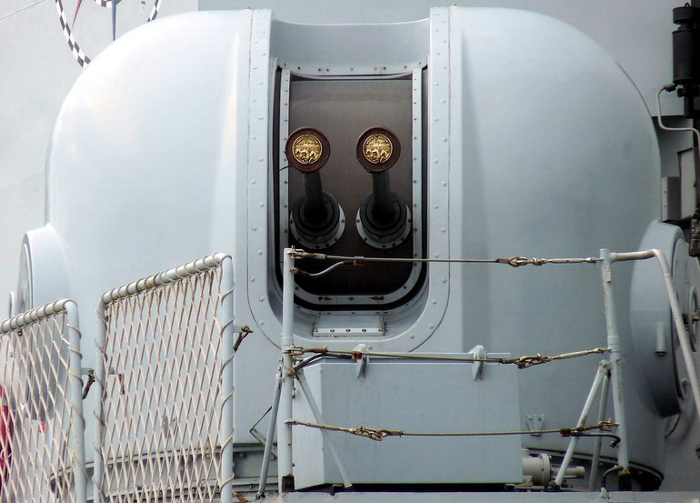 The PFHE round is fitted with a radar proximity fuse, ensuring detonation between 19 ft 8.25 in (6.0 m) and 22 ft 11.5 in (7.0 m) from an aeroplane, and 14 ft 9 in (4.5 m) from a missile. This latter distance was found to be too great for effective use of the PFHE round against sea-skimming missiles, and a PFHE Mk 2 projectile was developed with an improved fuse characterised by a trigger distance of 6 ft 6.75 in (2.0 m) to make possible its use against targets operating at a height below 16 ft 5 in (5 m). This reduced trigger distance also increases the density of the fragmentation pattern hitting the target, and so improves kill probability. Further development is concentrated on increasing the density of the tungsten carbide pellets, without significant degradation of their outward velocity, as a means of increasing kinetic energy delivered onto the target.

Italian ammunition
Ammunition for the 70-calibre gun is also made in Italy by SNIA BPD; with the types available being APFSDS, AP-T, PFF, HEI, HEI-T and two types of practice round. The APFSDS round weighs 5.07 lb (2.3 kg) while the other types weigh 5.62 lb (2.55 kg). The PFF projectile has a filling of Compound B explosive, while the HEI and HEI-T projectiles are filled with Tritolital.

The designers made great efforts when developing the mounting to keep the whole assembly as light and compact as possible. Apart from the obvious benefits this offers in shipboard installation it enables high rates of movement and acceleration, both of which are vital for the successful engagement of short-range targets. The mounting is electrically powered via servo motors, and these provide a traverse rate of 90° per second and an elevation rate of 60°, both with an acceleration of 120° per second².

Remote control
Being wholly unmanned, the Twin 40L70 Compact has to be integrated into a radar-directed or optronic fire-control system whose computer can generate the appropriate laying and elevation instructions together with fire orders. The most important of these is a system developed jointly by Elsag and Selenia, whose use with the 40-mm gun produces the Elsag/Selenia Dardo naval point defence gun system. This was designed specifically to counter the attacks of anti-ship missiles at short range, but also is very effective against close-range attack aircraft. The stated operational scenario for the development of the system was the need to destroy dangerous threats moving at high speed and detected only when close to the Dardo-fitted ship, thus requiring high-speed decision making and fire-control with targets between 3,830 and 330 yards (3500 and
300 m) distant. The system can be controlled manually, but is designed for automatic use using the following sequence of functions after receipt of preliminary target data from sources such as the ship’s surveillance radar or ESM suite, with optical spotting a possibility.

Higher-grade fire control
The Dardo system employs modular construction and digital processing, so the system can readily be adapted to other weapons, or to a mix of 40-mm mountings and short-range SAMs. The latest version is the Dardo-E, otherwise known as the Argo NA 30 fire-control system, and combines the baseline Dardo system with Orion RTN-30X radar, an IR tracker and a TV back-up system to provide a multi-capable air defence system able to control a SAM launcher, typically the Albatros type for Aspide missiles, with up to three gun mountings that might be a combination of one OTO Melara Compact 76/62 and two Twin 40L70 Compact mountings.

An alternative to Dardo is a British system, the Marconi/British Aerospace Sapphire. The Sapphire system combines a Marconi ST 1802 I-band coherent monopulse search and tracking radar, a BAe Sea Archer predictor and a one-man console. The radar is fitted with a TV tracker, and can detect 43-sq ft (4-m²) aircraft at a range of more than 26,250 yards (24005 m), or to a maximum of 26,250 yards (24005 m) in moving target indication mode. Perhaps more significantly, the radar can detect a 1.1-sq ft (0.1-m²) low-level anti-ship missile at between 16,500 and 13,125 yards (15090 and 12000 m). The system has its own threat prioritisation system when used autonomously, feeding data on the highest-threat target to the predictor, which automatically trains the gun to the right bearing and elevation, and informs the operator when the target is within range. The radar can be used passively when the target is using ECM, or the system can shift to optical sighting.

The capabilities of Dardo are employed to best effect with the latest version of the Twin 40L70 Compact, the Twin Fast Forty 40-mm naval twin gun mounting. This was developed specifically to deal with the latest generation of anti-ship missiles capable of speeds greater than 1,342 mph (2160 km/h). The mounting has a digitally-controlled servo system for direct command by the latest fire-control systems, as well as extreme accuracy of tracking, but its main improvement over the Twin Compact mounting is a development of the ordnance to increase individual rate of fire by 50% to 450 rounds per minute, and to improve target-engagement capability by installing a dual-feed system that allows instant change between ammunition types. This allows the engagement of an incoming target with PFHE at longer ranges and then an immediate switch to APFDS should the missile reach the crucially short range close to the ship under attack.