During World War II, in which the USA became formally involved only in December 1941 but had already started the process of industrial expansion that made it the ‘arsenal of democracy’, the ever-accelerating pace of military production meant that there inevitably appeared some shortages of raw materials. The most important of these were the metals from which strategically vital alloys were made, and in the course of 1941 the Americans followed a lead which had already become evident in other countries and started a programme to find alternative materials and, in the case of aircraft, to create aircraft designs which made minimal requirements on the country’s stocks of strategic materials such as steel and aluminium alloy. A shift from these strategic materials to non-strategic materials was possible without undue difficulty in the case on non-combat aircraft: the Beech AT-10 Wichita advanced trainer, for example, was of wooden construction, and the fact that the higher structure weight meant a degradation of performance was not unduly significant in this and other wooden aircraft. 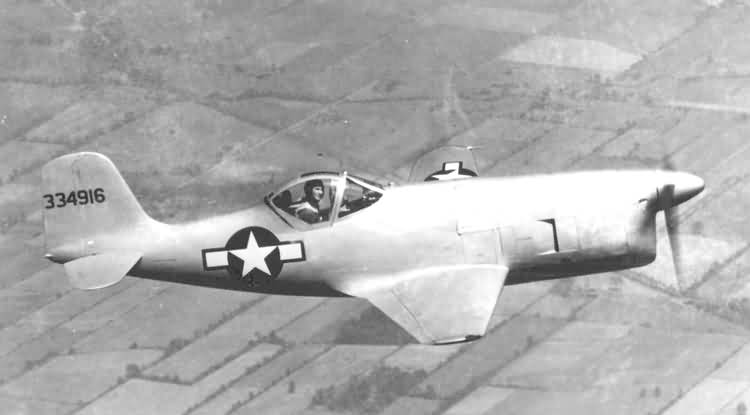 The US Army Air Forces were also interested in the development of combat aircraft based on a structure of non-strategic materials, and in October 1941 called a conference of interested parties at Wright Field, Ohio. The conference was attended by the representatives of many aircraft manufacturers, of whom the most enthusiastic was Bell. In April 1942 this enthusiasm resulted in the company’s receipt of a contract for the design of a lightweight fighter.

The resulting aeroplane was not altogether new as, under the leadership of Robert J. Woods, the Bell design team working on the programme that would lead to the P-39 Airacobra had as early as 1936 prepared two initial designs. The Model 4 led to the P-39, while the Model 3 was abandoned but not forgotten. Thus it was the Model 3 that was used as the basis for the design, successively designated as the Tri.4, Design D-6 and finally Model 32 within the company, for the new lightweight fighter.

The Model 32 thus evolved as low-wing cantilever monoplane of typical ‘modern’ fighter configuration with an enclosed cockpit, retractable landing gear, trailing-edge flaps and stressed-skin construction. Where the Model 32 differed from the mainstream of fighter design, however, was its small overall size, low-rated powerplant of one inverted V-type engine of the air- rather than liquid-cooled type, and structure of resin-bonded laminated Sitka spruce. 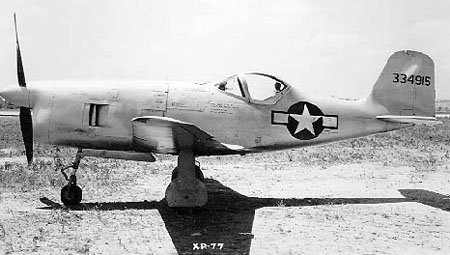 The overall design was as clean as possible in aerodynamic terms since Woods wanted to create a fighter with what he called the ‘magic 4-4-4 combination’ (Tri.4), which translated as a fighter weighing no more than 4,000 lb (1814) yet capable of attaining a speed of 347.5 kt (400 mph; 644 km/h) on the power of an engine delivering only 400 hp (298 kW). For the powerplant Woods selected the Ranger XV-770-9 air-cooled inverted V-12 engine, a supercharged unit rated at 500 hp (373 kW) for take-off and driving, by means of a reduction gear that allowed the installation of a 20-mm cannon between the engine’s cylinder banks to fire through the propeller shaft, a two-blade Aeroproducts metal propeller of the constant-speed type with a diameter of 9 ft 6 in (2.90 m).

The core of the Model 32’s airframe was the fuselage, which was of narrow semi-triangular shape with rounded-off corners and the horizontal side at the bottom. From front to rear, this fuselage carried the air-cooled engine in a trim cowling with a coolant air opening at the bottom of the front face and louvred air exits at the sides, the fuel and oil tanks, the pilot’s high-set canopy of the clear-view type above the wing’s trailing-edge root fillets, and the cantilever tail unit. The low-set wing was based on dihedralled panels of laminar-flow aerofoil section, and these extended from the lower longerons, were tapered in thickness and chord, and carried on their trailing edges outboard ailerons and inboard flaps. The airframe proper was completed by the electrically operated landing gear, which was of the tricycle type with the main units retracting inward into the wing roots and the nose wheel unit retracting rearward into the underside of the engine cowling.

The USAAF wanted the new fighter to carry either one depth charge or bomb on an underfuselage hardpoint which could otherwise carry one drop tank, and Bell had therefore to remove the 20-mm cannon from the armament scheme to keep down the weight. This left a fixed armament of two 0.5-in (12.7-mm) fixed forward-firing machines guns in the sides of the engine cowling. 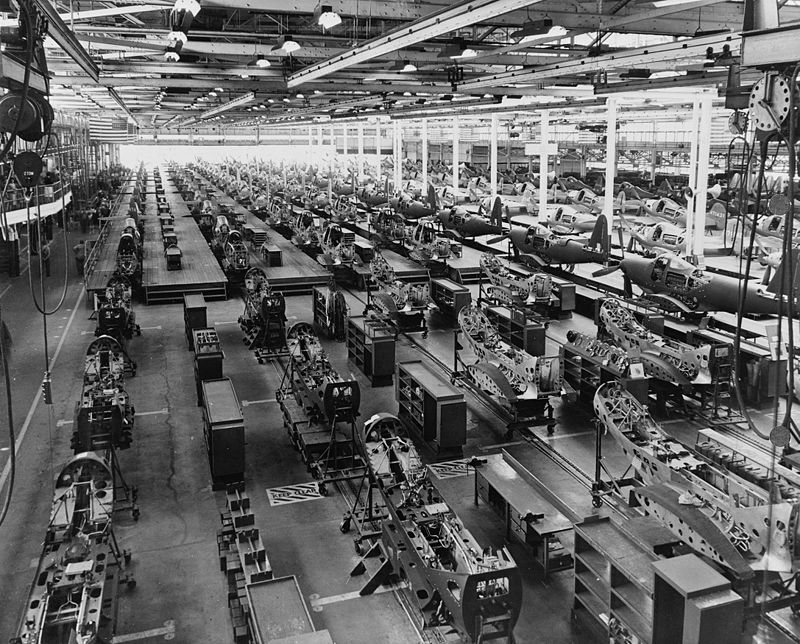 In October 1942 the USAAF placed an order for one full-scale mock-up, six XP-77 flying prototypes and two airframes for static tests, and specified that the first machine was to be delivered within six months. The full-scale mock-up was inspected in September 1942, and the USAAF at this stage demanded 54 changes. Bell was already hard pressed with large-scale production of the P-39, the development of the new P-63 Kingcobra piston-engined fighter, and the design of the P-59 Airacomet turbojet-powered fighter, however, and the schedule inevitably began to slip for this new low-priority warplane. Bell also asked for more money as well as more time, and the USAAF was also losing interest in the concept of the lightweight fighter made of non-strategic materials as the anticipated shortages of strategic materials had been either short-lived or was non-existent. In August 1943, therefore, the USAAF decided to cut back the lightweight fighter programme: on 20 December 1943 the USAAF informed Bell that it was to complete only two prototypes for delivery on 31 January and 1 March of the following year.

Even so, further delay hit the programme as a primary subcontractor, the Vidal Research Corporation, was able to deliver the wing panels only from 3 February 1944, and other problems were encountered in the landing gear.

Thus it was only on 1 April 1944, some eight months later than originally schemed, that the first XP-77 recorded its maiden flight with the XV-770-7 engine, a normally aspirated unit rated at 520 hp (388 kW), as the XV-770-9 supercharged unit was not available. The machine was flown to Wright Field in May for flutter and vibration tests, and in the course of its official trials suffered damage as a result of a nose wheel unit failure. After repairs had been effected, the aeroplane and its partner were transferred to Eglin Field, Florida, in July 1944 for operational trials in late July and early August. The type’s handling characteristics were found satisfactory but performance was far below that specified and was, indeed, inferior to those of the larger and heavier fighters of conventional construction already in service with the USAAF.

The second XP-77 was lost in October 1944 after the pilot bailed out when the aeroplane entered an inverted spin. Thus it was decided that no production would be ordered, and the whole P-77 programme was subsequently terminated in December 1944.

Fixed armament: two 0.5-in (12.7-mm) Browning M2 fixed forward-firing machine guns with 200 rounds per gun in the upper part of the forward fuselage with synchronisation equipment to fire through the propeller disc