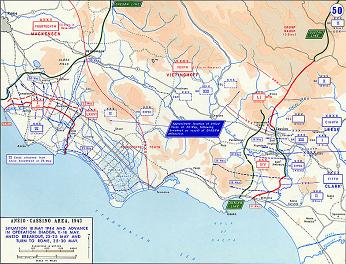 The last stage in the Battle of Anzio, which had started with the landing of the US VI Corps in ‘Shingle’ and then passed through the German ‘Fischfang’, ‘Morgenröte’ and ‘Sonnenaufgang’ counter-offensives, was the break-out on 23/25 May 1944 of the VI Corps, now commanded by Major General Lucian K. Truscott, to link with other elements of Lieutenant General Mark W. Clark’s US 5th Army. This army had at last emerged victorious from the vicious fighting for Monte Cassino, thereby breaking through the ‘Gustav-Linie’ defences and driving north-west toward Rome though the ‘Führer-Senger-Linie’ defences.

On 23 May the VI Corps attacked on a primarily north-eastern axis from its lodgement in the direction of Cisterna and Valmontone, and two days later made contact at Borgo Grappa with the leading elements of another of Clark’s formations, Major General Geoffrey T. Keyes’s US II Corps attacking north-west from the line of the Garigliano river. Even before Lieutenant General E. L. M. Burns’s Canadian I Corps of Lieutenant General Sir Oliver Leese’s British 8th Army broke through the left of their ‘Führer-Senger-Linie’ defences to the north of Monte Cassino and the ‘Gustav-Linie’, so opening the way toward the Anzio beach-head and the ‘Cäsar-Linie’ defences just to the south of Rome, Kesselring and his subordinate commanders had become increasingly concerned by the penetration of the defences in the south, where Général de Corps d’Armée Alphonse Pierre Juin’s French Expeditionary Corps and the II Corps had broken through to reach the highway linking Pico and Formio on 19 May. Generalleutnant Smilo Freiherr von Lüttwitz’s 26th Panzerdivision was having some success in restabilising this part of the front’s central sector between Pico and Pontecorvo area, but Generalleutnant Eberhard Rodt’s 15th Panzergrenadierdivision could not check the Allied advance nearer to the coast.

With some hesitation, because of his uncertainty about the overall situation, Kesselring ordered the 14th Army to despatch Generalmajor Fritz Polack’s 29th Panzergrenadierdivision from Civitavecchia to block the II Corps’ advance in the potentially strong defensive position along Highway 7 between Fondi and Terracina, where there was a final defile before Highway 7 debouched onto the flat land of the Pontine Marsh area, leading directly to the southern edge of the Allied beach-head at Anzio. If the 29th Panzergrenadierdivision could stop the Americans here, Kesselring believed, there remained a chance to prevent the junction of the two Allied forces. Von Mackensen disagreed with this, believing instead that it would be better to hold back the 29th Panzergrenadierdivision for the defeat of the break-out he was sure was coming from the beach-head. When it received Kesselring’s order, therefore, the 14th Army’s staff protested to Heeresgruppe ‘C’, and it was only on his return from a visit to the front that Kesselring learned that his order had not been obeyed. After the battle, Kesselring replaced von Mackensen with General Joachim Lemelsen. The two commanders’ disagreement had a decidedly dire effect on the fate of the 29th Panzergrenadierdivision. If it had moved south at the time of Kesselring’s original order on 19 May, it would have had the time it needed to prepare its positions before the US formations reached the Terracina defile but, as it now happened, the division was forced to deploy straight off the march into battle without even adequate reconnaissance. It also found that it was too late to stop the Americans, who had already taken possession of the high ground above the defile that should have been the basis of the German defensive position. The 29th Panzergrenadierdivision nonetheless fought courageously and did indeed manage to hold Terracina until the night of 23/24 May before being compelled to fall back, together with the remnants of Generalleutnant Bernhard Steinmetz’s 94th Division and Generalleutnant Wilhelm Raapke’s 71st Division, through the Monti Lepini toward Highway 6 in order to avoid being cut off.

On the Allied side of the line, matters were progressing along more amenable lines. The time was approaching for the VI Corps to break-out of the Anzio lodgement, and on 18 May General the Hon. Sir Harold Alexander, heading the Allied Armies in Italy command, permitted the movement of the 36th Division into the beach-head. The advance of the II Corps along the coastal sector meant that the 36th Division, which was the 5th Army’s reserve division and not to be committed without reference to the Allied Armies in Italy, would not be needed on the main front, and could therefore be used to strengthen the break-out force. Its move into the beach-head would take four days, so the earliest that the break-out could take place would be 23 May, which coincided nicely with the fact that Leese’s 8th Army and Juin’s French Expeditionary Corps would be attacking the ‘Führer-Senger-Linie’ defences on that day, and the II Corps advancing toward Terracina. But while there was no problem with the decision when to launch the break-out, there were difficulties with the decision about the direction in which the break-out should be made. This resulted in disagreement between Alexander and Clark, and between their staffs. 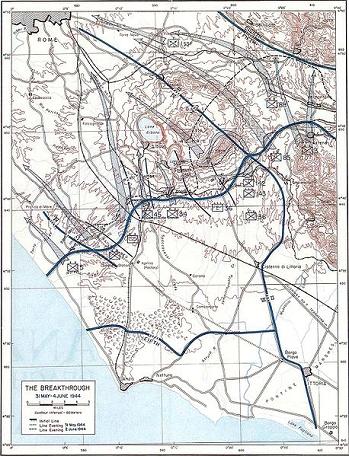 In his thinking and consequent orders for the ‘Diadem’ offensive to take Rome, Alexander had stressed that his primary aim was the destruction of German divisions, with the capture of Rome a secondary aim which would probably occur as a by-product of the achievement of the primary aim. Clark discerned matters in exactly the opposite way, and saw Rome as the primary objective with the destruction of German formations as the secondary, but nonetheless very important, objective. Clark believed vehemently that the 5th Army’s trials and tribulations during the winter of 1943/44 deserved this prize. So far as the break-out from the Anzio beach-head was concerned, therefore, Alexander felt that the VI Corps’ operation, for which there were five US and two British divisions available, should be made north-east in the direction of Valmontone to cut Highway 6 and thus sever the major line of retreat for Generaloberst Heinrich-Gottfried von Vietinghoff-Scheel’s 10th Army falling back in front of the 8th Army.

Clark objected on the grounds first that this would require a dangerous flank march across the front of the German forces holding the dominating Alban Hills and second that when the II Corps reached Valmontone the 10th Army could easily escape the trap by withdrawing up the two good roads and many subsidiary tracks leading north-west from Highway 6 to Highway 5, the primary lateral road linking Rome and Pescara, and at one time been Montgomery’s proposed axis of advance on Rome. Clark believed that if the Germans reached this lateral, they would easily be able to deploy their formations into the ‘Cäsar-Linie’ defences. Alexander accepted Clark’s first point but disagreed with the second, and in general held that the fewer the lines of retreat available to the Germans, the greater would be the destruction visited on them by Allied air power. The main problem at this point seems to have been that Alexander vacillated, and Clark therefore gained the impression it would not take much of a setback to the break-out toward Valmontone to persuade Alexander to change his mind and allow a direct attack west of the Alban Hills on Rome, as wanted by Clark.

Meanwhile, within the beach-head, the VI Corps had developed break-out plans appropriate to a number of contingencies, but it was finally agreed that the attack should be made, as Alexander directed, toward Valmontone. The break-out started on 23 May with an attack on Cisterna by the 3rd Division, 1st Armored Division and 1st Special Service Force. It was then intended to pass the fresh 36th Division with the 1st Armored Division through the breach in the German defences and on through the gap between the Alban Hills and the Monti Lepini toward Valmontone, giving the Alban Hills as wide a berth as possible. Major General William W. Eagles’s US 45th Division would protect the northern flank by widening the breach toward the Alban Hills, while two British formations, Major General G. W. R. Templer’s 1st Division and Gregson-Ellis’s 5th Division, held the northern perimeter against any relieving attack which Schlemm’s I Fallschirmkorps might choose to make.

When they attacked, the 1st Armored and 3rd Divisions achieved total tactical surprise and opened a sizeable gap in the defences of Greiner’s 362nd Division and Hoffmann’s 715th Division. The latter broke first and tried to pull back toward the Monti Lepini, but the former stood its ground and, with the aid of airborne forces arriving from the northern side of the lodgement, held the northern shoulder of the US breach. Heavy fighting continued on 23/24 May, and on 25 May the leading elements of Generalleutnant Wilhelm Schmalz’s 1st Fallschirm-Panzerdivision ‘Hermann Göring’ began to arrive. Thus Kesselring had been compelled to commit his last reserve mobile division, a formation earmarked by the Oberkommando der Wehrmacht for redeployment to France to bolster the defences against ‘Overlord’, in order to check the US breakout. So acute had the German position round Anzio become that this Luftwaffe division had to run the major risk of moving south in daylight, and as a result suffered severe losses: during 25 May some of these German reinforcements were spotted moving south from Valmontone toward the location of the US break-out and were heavily bombed and strafed by Allied warplanes. The VI Corps claimed some 600 German vehicles destroyed and 400 damaged. The figures will never be known with any accuracy, but as the US forces drove forward past Cisterna they found the roads blocked with burned-out German equipment.

By dusk on 25 May a wide breach had been secured, Cisterna, Cori and the northern edge of the Monti Lepini were in US hands, and the leading elements of the II Corps, advancing to the north-west from Terracina, made contact with a patrol from the beach-head. Thus the 5th Army was reunited after three and a half months of separation. The Germans had lost 2,500 prisoners by this time, but US losses had been by no means negligible: the 1st Armored Division had lost many tanks, and the 3rd Division had suffered more than 1,000 casualties on the first day alone, but both formations were nonetheless still full of fight. It was at this moment that Clark decided to change direction and to make his main effort north-west along Highway 7 and the road linking Anzio and Albano, and thus straight to Rome. To sugar the pill for Alexander, he proposed to continue the offensive toward Valmontone with the 3rd Division, while the 34th, 36th and 45th Divisions and the 1st Armored Division opened a direct attack on the ‘Cäsar-Linie’ defences to the west of the Alban Hills on 26 May. Alexander accepted Clark’s plan on the assurance that he would maintain the Valmontone thrust. It would be overstating the case against Clark to say that he paid only lip service to Alexander’s orders, but in practical terms this was what in fact happened.

As a result of excellent staff work, the VI Corps was able to move off along its new axis by 12.00 on 26 May while the 3rd Division continued toward Valmontone, took Artena a mere 3 miles (4.8 km) south of Highway 6 near Valmontone, but was then halted by a quickly improvised German assembly of the 1st Fallschirm-Panzerdivision, Generalleutnant Hellmuth Böhlke’s 334th Division from the Adriatic sector, and Oberst Freiherr de la Salle’s 92nd Division recently activated near Rome. Thus the line of retreat was held open for the 10th Army, which lived to fight on for the rest of the Italian campaign.