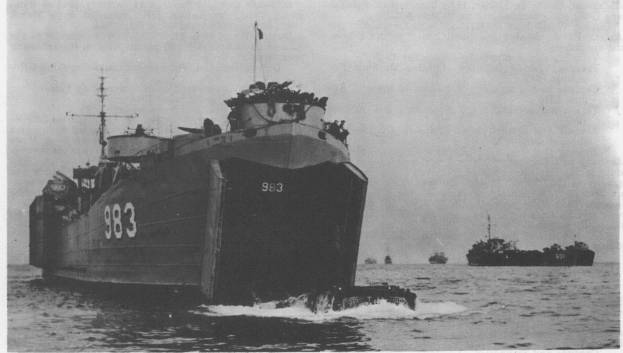 When the LST Mk I was being designed, the concept of distant raiding still featured strongly in British minds and thus influenced the design, but by the winter of 1941 the distant raiding concept had been largely replaced by a fear of invasion. At their first meeting at the Atlantic conference in Argentia, Newfoundland, during August 1941, President Franklin D. Roosevelt and Prime Minister Winston Churchill confirmed the British Admiralty’s initial concept, and it was decided that US yards were to build seven LST Mk I vessels. In November 1941, however, a small Admiralty team reached the USA to pool ideas with the US Navy’s Bureau of Ships about the development of ships and the possibility of building further LST Mk I vessels in the USA. The meeting decided that the Bureau of Ships would design these vessels, and US yards would construct them so that British yards could concentrate on building and repairing ships for the Royal Navy and British merchant marine.

The specification called for vessels capable of crossing the Atlantic on their own bottoms, and the original title given to them was Atlantic Tank Landing Craft, but then the idea of calling a vessel 300 ft (91 m) long a craft was seen as inappropriate and the type was reclassified as the Landing Ship, Tank Mk II, or LST Mk II (later LST Mk 2), able to make long ocean passages but still provide the ability to land heavy tanks directly onto an assault beach. The details of the design were worked out by the British Department of Naval Construction and US Bureau of Ships in the winter of 1941/42, and the first ships were ordered in February 1942. Roosevelt authorised the construction of 200 LST Mk 2 vessels (only a little more than half of these entered British service) for delivery under Lend-Lease arrangements, together with 200 examples of the LCT Mk 5, and the same numbers for the US Navy. Roosevelt also approved the construction of 14 dock landing ships, seven of them for the British in replacement for the seven cancelled LST Mk I vessels.

The LST Mk 2 design incorporated elements of the first British LCTs from their designer, Sir Rowland Baker, who was part of the British delegation. These elements included sufficient buoyancy in the ships’ sidewalls that they would float even with the tank deck flooded. And while the LST Mk 2 had only a slightly greater speed than the LST Mk I, it possessed a similar load capability while drawing only 3 ft (0.9 m) forward when beaching.

Within a few days, the Bureau of Ships’ John C. Niedermair had drafted a ship of awkward appearance but which nonetheless became the basic design for the more than 1,000 LST Mk 2 ships built in World War II. To meet the conflicting requirements of deep draught for ocean travel and shallow draught for beaching, the design included a ballast system which could be filled for ocean passage and pumped out for beaching operations. The incorporation of an anchor and variable-power mechanical winch system also enabled the ship to kedge itself off the beach. Other features were a vehicle lift between the vehicle and tank decks and fan-trunk ventilation to allow vehicle engines to be run on the enclosed tank deck.

The LST Mk 2 was optimised for the carriage of a 2,100-ton load of tanks and vehicles, and the enlargement of its dimensions made it possible for the design team to widen the bow door opening and ramp from 12 to 14 ft (3.66 to 4.27 m) and thus allow a larger number of vehicles type to be accommodated.

As the dimensions and weight of the LST increased, the thickness of the steel plating was increased from 0.25 in (6.4 mm) to 0.375 inch (9.5 mm) on the deck and sides, with 1-in (25-mm) plating under the bow. By January 1942, the first LST Mk 2 scale model was being tested at the David Taylor Model Basin in Washington, DC. The trials were completed in three months.

In the LST Mk 2, the tanks were carried just above the water-line level and parallel to it along the ship’s length. This arrangement provided convenient machinery space aft for the two locomotive-type Diesel engines below the tank deck. At the bow was a ramp of the LCT type behind two outward-opening vertical doors. Major modifications were made from LST-513, and in all but one of the subsequent ships there was a ramp rather than a lift between the vehicle and tank decks. From LST-542 the payload was reduced to allow for increased armament, a seawater distillation plant with a capacity of 4,000 US gal (15140 litres) per day, and other added weight. Thus the draught of both basic variants was kept within the same parameters. The loading of these ships was varied to suit either an ocean passage or the shallower draught needed for beaching. With 33.3 tons per inch immersion, the ships carried 1,875 tons (1,695 tons in the ‘LST-542’ class) for an oceangoing draught of 8 ft (2.44 m) forward, and with 500 tons for landing they drew 3 ft 1 in (0.94 m) at the bow. When light, they drew only 1 ft 6 in (0.46 m). A causeway carried outboard of the sides allowed vehicles to land in shallow water on a beach after it had been floated into position.

The main feature of the LST Mk 2 was the large tank deck, which was 288 ft (87.78 m) long, 30 ft (9.14 m) wide and 11 ft 3 in (3.43 m) in clear height from the deck to the underside of the electric lights, giving a volume of 92,765 cu ft (2627 m³) after allowing for ship’s equipment. The size of the deck made the handling of any vehicle type, including the bulldozer, comparatively straightforward. There were, of course, considerable fire hazards as petrol- and ammunition-laden vehicles were moved through an assault area swept by all manner of projectiles, but there were sprinklers in the hold and fire mains on the upper deck, and later US Navy ships were outfitted with water curtains and drenching equipment.

Troop accommodation was spacious by the standards of major landing craft. The troops had multiple two- and three-tier bunks with heads and a seawater shower in each accommodation area in the sidewalls. The crew was accommodated on the vehicle deck level abaft the superstructure. 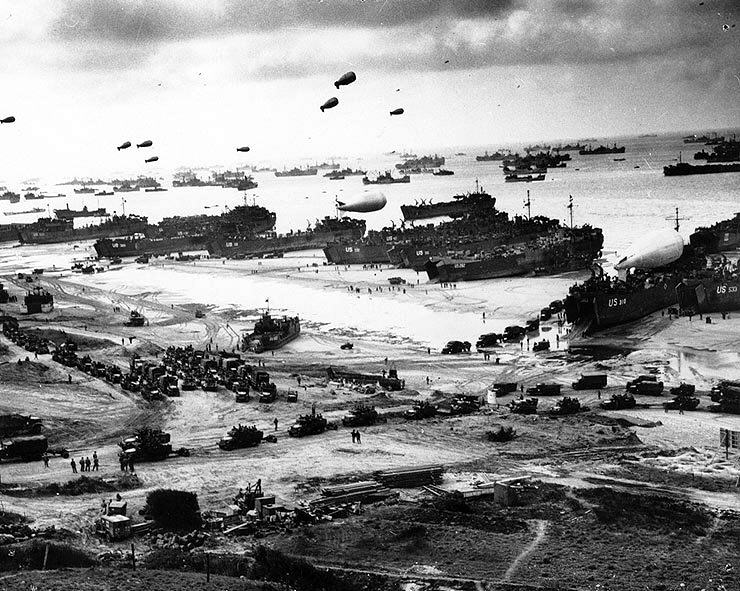 The invasion of Europe and the defeat of Japanese forces were entirely dependent on the rapid building of the Allied armadas in which the LST played a key role. The date of the Normandy landings was not fixed until the supply of such vessels had been assured, and Pacific operations could not have been mounted so rapidly and on so large a scale without LSTs. More than 1,000 LST Mk 2 ships had been built before the end of the war, many of them built in very short times even by comparison with the records set for all manner of armament manufacture at that period. The first 30 completed at the Baltimore, Maryland, yards of Bethlehem Steel were delivered in 10 months, only 19 days outside the contract schedule, yet the LST took more man-hours to build than a ‘Liberty’ ship which was about five times larger.

The construction programme rapidly gained great momentum. So high a priority was assigned to LST construction, for instance, that the previously laid keel of an aircraft carrier was hastily removed to make room for several LSTs to be built in her place. The keel of the first LST was laid down on 10 June 1942 at Newport News, Virginia, the first standard LSTs were floated out of their building dock in October, and 23 were in commission by the end of 1942.

The LST programme had several unique aspects. As soon as the basic design had been developed, contracts were let and mass production started even before the completion of a test vessel. Preliminary orders were rushed out verbally or by telegram, telephone and air mail letter. The ordering of certain materials actually preceded the completion of the design work. While many heavy equipment items such as main propulsion machinery were furnished directly by the US Navy, other procurement was centralised in the Material Coordinating Agency so that the programme’s several builders would not have to bid against each other.

The need for LSTs was so urgent that the programme enjoyed a high priority throughout the war. Since most shipyards were located on the USA’s coast, and used primarily for the construction of large, deep-draught ships, new construction facilities for LSTs were established on inland waterways, some of them converted from heavy industry plants such as steel fabrication yards. The movement of the completed vessels from yard to sea was complicated by the presence of many bridges across waterways, but large numbers of these were modified by the US Navy to permit passage, and a special command controlled the movement of newly constructed ships to coastal ports for fitting out.

Of the 1,051 LSTs built during the war, 670 were supplied by five Midwest ‘cornfield shipyards’. The Dravo Corporation’s facility at Neville Island, Pennsylvania, was the lead shipyard for the project, building 145 vessel and developing fabrication techniques which significantly reduced construction time and cost across all the LST shipyards. The Missouri Valley Bridge & Iron Co. built the more LSTs than any other yard, with 171 constructed at Evansville, Indiana. Chicago Bridge and Iron’s yard at Seneca, Illinois, launched 156 ships after being selected for its reputation and skills, especially in welding. The American Bridge Company of Ambridge, Pennsylvania, built 119. 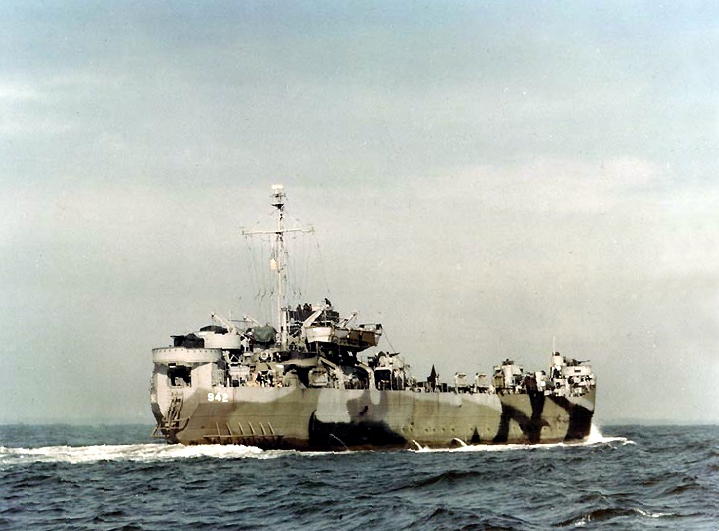 By 1943, the time needed to build an LST had been reduced to four months, and by the end of the war to two months. Considerable effort was expended to hold the ship’s design constant in order to streamline production, but by mid-1943 operational experience demanded the incorporation of changes in new ships.