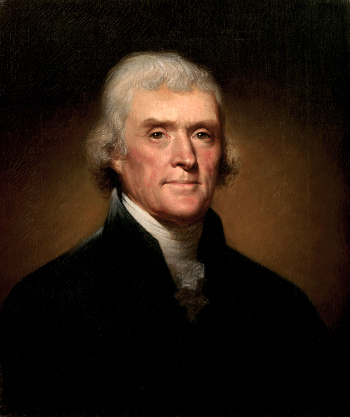 Thomas Jefferson was inaugurated as the third president of the United States of America in March 1801, and immediately set about aiding the Congress in the economies forced on the armed forces. Many of the warships that had performed so well in the Quasi-War with France (1798/1800) were sold, leaving the US Navy as a frigate force intended only to secure American coasts and trade. Jefferson and the Congress moved more slowly against the US Army. After the disbandment of the Provisional Army in 1800, the strength available to President John Adams had been the 4,000 men of the regular army, which had an authorised establishment of 5,438. In March 1802, however, the establishment was trimmed to just 3,220, which was about the level when Adams took office in March 1797. By comparison with the 1797 army, the army of 1802 was more than 50% stronger in artillery, but was entirely stripped off cavalry, which the politicians thought to be an over-expensive luxury.

As well as cutting the size of the army, the Congress interfered with its organisation. The Office of the Quartermaster General was abolished in favour of a system of contract agents. The United States was divided into three military departments each containing an agent who, with his assistant agents, was responsible for all movement of men and supplies within that department. Since agents and assistant agents were each appointed by the president, there was no way in which the agent could issue orders to an assistant agent, and the system soon proved completely inefficient.

Not everything was wrong with the 1802 reforms, however, for an important step in the right direction was the creation of a Corps of Military Engineers. From the Revolutionary War onward the army had lacked any form of trained technical support, relying instead on import of European specialists. Many senior officers had argued for the establishment of an engineering school, but the closest the army had come to such a solution was during the administration of President George Washington, when two cadets had been placed for instruction on the strength of each company of the Corps of Artillerists and Engineers. In 1802 the Congress created the Corps of Engineers. Its seven officers and 10 cadets were assigned to West Point to serve on the staff of the military academy established there in March of the same year.

The Louisiana Purchase
Soon after Jefferson’s inauguration it became a common rumour in the United States that France had bought Louisiana from Spain. In itself the agreement was a blow to the generally held American belief that any weakening of European bonds would automatically lead to the absorption of such possessions into the United States. For several reasons Louisiana’s change of ownership also represented a physical problem for the United States. American policy on the western frontier had until this time been concerned mainly with pacification of the Indians, stifling separatism among the inhabitants of the western territories, and nipping in the bud any friction between American settlers and the Spanish. Any resumption of the French presence in Louisiana opened the possibility of a powerful neighbour to the west, and led to a restriction on the American practice of sending goods down the Mississippi River for export via New Orleans. Just before their sale of Louisiana the Spanish cancelled this right, and the French rapidly exploited this Spanish move to halt the movement of American trade down the river. Another factor that the Americans had to consider was the very size of the territory involved, a huge area covering virtually the whole of the modern United States from the Mississippi River westward to the Rocky Mountains with the exception of Texas.

In 1803 Jefferson decided to test the possibility of an American purchase of Louisiana from the French and, to the surprise of many, Napoleon agreed to the sale as he was faced with the prospect of renewed war in Europe. The Louisiana Purchase, as it is known, added 827,000 square miles to the area of the United States, very nearly doubling the size of the nation. Formal possession of Louisiana was taken by the army on 20 December 1803, and small garrisons were soon established in New Orleans and a number of other ex-Spanish posts on the lower reaches of the Mississippi River. The first governor of the new Louisiana Territory was Brigadier General James Wilkinson, the army’s senior serving officer.

The ‘Barbary Wars’
As these events were unfolding in North America, the United States had become embroiled in another war. This was one of the strangest wars fought by the United States, and resulted from the semi-piracy of Moslem states in North Africa. From east to west these were the Barbary states of Tripoli, Tunis, Algiers and Morocco. The first three were semi-independent vassal states of the Ottoman Empire, and the last an independent kingdom. For many years these countries had extorted tribute from Europe’s maritime nations in return for not attacking their merchant ships in the Mediterranean Sea. Since 1796 the United States had also been involved in this unsavoury practice, but in 1800 Yusuf Karamanli, the Pasha of Tripoli, raised his rate. The United States refused to consider the new rate, and on 14 May 1801 Tripoli declared war on the United States.

President Jefferson felt that American warships should be deployed into the western Mediterranean to protect American shipping, and this squadron was sent in July. For about two years the squadron attempted to blockade Tripoli, but enjoyed only very limited success. In August 1803 command of the squadron was assumed by Commodore Edward Preble, who breathed new life into the American effort with a programme of active operations against Tripolitan pirates. Then on 31 October of that year the 38-gun USS Philadelphia, a 1,240-ton frigate commanded by Captain William Bainbridge, ran aground while pursuing a pirate toward Tripoli harbour. The stranded American frigate was immediately surrounded by some 20 Tripolitan gunboats and, rather than see his men slaughtered, Bainbridge surrendered. The Philadelphia was later refloated and towed into Tripoli as a prize. 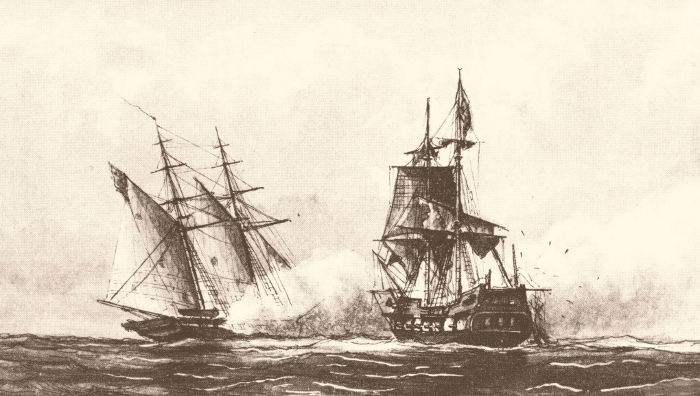 Attack on Tripoli
This was an insult too great for the Americans to bear, and a cutting-out expedition was organised under the command of Lieutenant Stephen Decatur. With a party of 73 volunteer sailors and marines, Decatur boldly sailed the ketch Intrepid into Tripoli during the night of 16/17 February 1804 and retook the Philadelphia in a small but bitterly fought action right under the guns of the pasha’s castle. The Americans suffered no casualties in the fight. Only after recapturing the ship did Decatur discover that she was not seaworthy, so he burned her at her mooring before escaping. On hearing of this feat, the British Admiral Horatio Nelson declared it ‘the most bold and daring act of the age’.

Preble then brought his ships toward the northern side of Tripoli and launched a major bombardment, but could not achieve a decisive result as his ships could not enter the harbour through the twisted channel between treacherous shoals. On five other occasions later in the year (3, 7, 24 and 28 August, and September 3) Preble again bombarded Tripoli with his flagship, the USS Constitution, a 1,576-ton frigate of 44 guns, the brigs and schooners USS Argus, USS Enterprise, USS Nautilus and USS Vixen, and eight gunboats.

In the following year the American naval agent William Eaton persuaded Yusuf’s deposed elder brother, Ahmet Bey, to finance an overland attack on the Tripolitan fortress of Derna, which lay about mid-way between the Gulf of Sirte and the Tripolitan frontier with Egypt. Ahmet saw in the scheme a chance to start the overthrow of his brother, and agreed. On 6 March Eaton set off from Alexandria in Egypt with Ahmet and about 400 Arab mercenaries as well as Lieutenant Presley O’Bannon of the US Marines and seven of his men. In the course of its 600-mile journey along the coast of North Africa through the Libyan desert, the party faced a number of hazards including two mutinies by the camel drivers (on 10 and 18/20 March), two mutinies by part of the Arab mercenary force (22/26 and 30 March) and a general mutiny by the Arab mercenaries (8 April). The party finally reached Derna on 27 April, and with the supporting fire of three American gunboats stormed Derna on the same day.

For six weeks Eaton’s force held the fortress against Yusuf’s counterattacks. Meanwhile Preble’s successor, Commodore Samuel Barron, had entered into negotiations with Yusuf and reached agreement on 4 June. In return for a single payment of $60,000, Yusuf released the crew of the Philadelphia and promised to make no more ransom demands. Eaton, the victor in the first American overseas land operation, evacuated Derna and matters returned to normal off the Tripolitanian coast.

Peace forced on Tunis
A similar result was achieved with Tunis on 1 August of the same year. Commodore John Rodgers sailed into Tunis in the Constitution and forced on the Bey of Tunis the same basic terms as had finally been accepted by Tripoli. The Tripolitanian-American War had been a limited conflict, and its outcome had been only partially what the United States wanted as small-scale activities against American shipping continued. Even so, the war is of historical importance as the first time the United States projected its military strength outside its own frontiers.

Of the Ottoman Empire’s three vassals which had been exacting payment from the Americans, only Algiers was now left as a thorn in the American side. As trouble with France and the United Kingdom (as Great Britain had become on 1 January 1801) was now of more overall importance, any solution to the Algerine problem was postponed. American warships were pulled out of the Mediterranean during the War of 1812, however, and this opened the way for the Dey of Algiers to cause additional trouble. His first move was to resume attacks on American shipping, but then he compounded this error be expelling the American consul, imprisoning American nationals and finally, on 3 March 1815 declaring war on the United States on the grounds that insufficient tribute was being paid. Commodore Decatur sailed into the Mediterranean with a squadron of 10 vessels, seized two Algerine warships, and sailed into Algiers. With the guns of his vessels loaded and run out, Decatur demanded the release of American nationals, an end to Algerine demands for tribute, and the halting of all piracy. The Dey reluctantly agreed to these demands, and the ‘war’ ended on 30 June. Decatur then sailed to Tunis and finally Tripoli, where he imposed similar terms on the Bey of Tunis and the Pasha of Tripoli, as well as receiving compensation for American ships seized by the British in Tunisian and Tripolitan waters during the War of 1812.

This ended American participation in the ‘Barbary Wars’, which continued to plague the European powers for some years to come.