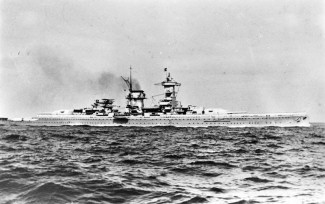 I must admit my fascination with anniversaries associated with all things military, especially in World War II, and the later part of February and the first days of March 1941 mark the 70th anniversary of a fascinating and far-flung naval foray into the Indian Ocean by the German ‘pocket battleship’ Admiral Scheer.

Admiral Scheer was the second of the German navy’s three Panzerschiffe (armoured ships) of the ‘Deutschland’ class to be commissioned, on 12 November 1934. She was preceded by Deutschland, commissioned on 1 April 1933, and followed by Admiral Graf Spee, commissioned on 6 January 1936. Diesel-engined for a maximum speed of 28.5 kt and a range of 10,250 miles (16500 km), each of these ships had a full-load displacement of 16,200 tons and an armament centred on six 280-mm (11-in) guns in two triple turrets fore and aft, and a secondary battery of eight 150-mm (5.91-in) guns in eight single turrets (four on each beam). There were also six 105-mm (4.13-in) dual-purpose guns in three twin mountings, eight 37-mm AA guns in four twin mountings, six (later 10) 20-mm AA guns in single mountings, eight 533-mm (21-in) torpedo tubes in two quadruple mountings, and two Arado Ar 196 floatplanes for reconnaissance and spotting.

Designed for long-range commerce raiding, the ships were armoured to a maximum thickness of 80 mm (3.15 in) on the hull and 160 mm (6.3 in) on the turret faces, and were schemed on the basis of outshooting anything from which they could not run, and outrunning anything which they could not outshoot. Perhaps inevitably, the ships became known to the British as ‘pocket battleships’.

The first of the three sister ships to become celebrated was Admiral Graf Spee, which completed a successful raiding cruise in which she sank or captured 50,089 tons of Allied shipping before being caught in the tactically inconclusive Battle of the River Plate on 13 December 1939 and scuttled on 17 December in the erroneous belief that there were powerful Allied units waiting for her off the estuary of the River Plate between Argentina and Uruguay. Despite this loss, the Germans believed that the concept of commerce raiding by large warships had been validated, and Admiral Scheer was modified during the early months of 1940: with her heavy command tower replaced by a lighter structure, she and Deutschland (now renamed Lützow) were reclassified as heavy cruisers.

Under the command of Kapitän zur See Theodor Krancke, Admiral Scheer sailed on 14 October 1940. Her first target was the HX.84 convoy from Halifax, Nova Scotia, whose passage had been detected by the B-Dienst radio intercept service. One of Admiral Scheer’s floatplanes spotted and reported the convoy on 5 November 1940 and Krancke, believing the convoy to be unescorted, ordered his ship to close the target. As the convoy came into sight, however, one vessel steamed away from the convoy to challenge the German raider. This was the 14,164-ton Jervis Bay, launched in 1922 for the Aberdeen & Commonwealth Line and, since her commissioning in October under the command of Captain Edward Fegen, serving as an armed merchant cruiser that was now the convoy’s only defence. The ship had a maximum speed of a mere 15 kt, was armed with obsolescent weapons in the form of seven 6-in (152-mm) and two 3-in (76.2-mm) AA guns in single mountings, and lacked any armour protection. The armed merchant cruiser was at best a limited-utility expedient for mid-ocean escort as, for lack of adequate warship numbers at this early stage in the war, British convoys received destroyer escorts only on the last three days of their journey. Jervis Bay was completely outclassed, but Admiral Scheer had to dispose of her before attacking the convoy, which had already begun to scatter and make smoke. Admiral Scheer sank Jervis Bay in a completely one-sided action and then succeeded in sinking five British merchant ships (7,908-ton Maidan, 5,201-ton Trewellard, 5,225-ton Kenbane Head, 10,142-ton Beaverford and 4,995-ton Fresno City) and setting fire to the 8,073-ton tanker San Demetrio, which was abandoned but later reboarded and brought into harbour.

The episode persuaded the Admiralty to change its policy for the escort of larger convoys, which were escorted, in the short term at least, by battleships or battle-cruisers even though this meant that these primary assets were therefore unavailable for ‘pure’ naval efforts.

The Royal Navy sent out several warships in a major undertaking designed to trap and destroy Admiral Scheer, but the German warship slipped away to the south to rendezvous with Nordmark, her replenishment ship. Over the next two months Admiral Scheer sank several ships, capturing supplies and transferring prisoners to Nordmark at the mid-ocean ‘Planquadrat Anadalusien’ rendezvous point, or other ships which she took as prizes. The warship spent Christmas 1940 at sea in mid-Atlantic, several hundred miles from Tristan da Cunha, before Krancke decided in February 1941 that the time was ripe for a foray into the Indian Ocean.

Between 14 and 17 February Admiral Scheer, the auxiliary cruiser Schiff 16/Atlantis (in company with her prizes Ketty Brovig and Speybank) and the supply vessel Tannenfels remained together about 1,150 miles (1850 km) to the east of Madagascar. Here the ships replenished and exchange information. On 15 February the WS.5BX convoy of 20 troop transports, including 11 of between 17,000 and 27,000 tons, departed Durban in South Africa under escort of the cruisers Australia and Emerald. On 21 February WS.5BX was supplemented, off Mombasa on the coast of Kenya, by the cruiser Hawkins, and Emerald headed north-east toward Bombay with four transports. Admiral Scheer had meanwhile passaged north toward the Seychelles and here, on 20 February, one of her floatplanes spotted and reported two merchant ships. Admiral Scheer closed and captured the 6,994-ton British Advocate (the ship reached the Gironde river estuary in German-occupied France on 29 April) and 2,546-ton Greek Grigorios CII. A third ship, the 7,178-ton Canadian Cruiser, was sunk on the following day, but not before she had managed to transmit a distress signal. The signal was received by the cruiser Glasgow, which was cruising in the area, along with a signal from the 2,542-ton Dutch ship Rantaupandjang, transmitted before she succumbed to Admiral Scheer on 22 February. When Admiral Scheer was sighted and reported later on this same day by an seaplane catapulted from Glasgow, Vice Admiral R. Leatham, British naval commander-in-chief in the East Indies, ordered the fleet carrier Hermes and cruiser Capetown to sortie from Mombasa, the cruisers Emerald and Hawkins to detach from the WS.5BX convoy that then became the responsibility of the cruiser Enterprise, and the cruiser Shropshire to move east from the Somali coast. Further British naval movements included the Australian cruiser Canberra (relieved on 20 February off Colombo by the New Zealand cruiser Leander detached from the US.9 convoy of three troop transports that had departed Fremantle in Western Australia on 12 February), which was sent from the Maldives.

The ships search in vain for Admiral Scheer until 25 February, but the German warship had turned away to the south-east and then re-entered the South Atlantic on 3 March before heading north to pass through the Denmark Strait and then turning east and finally south to reach Kiel on 1 April 1941. In this successful foray, Admiral Scheer had steamed more than 53,000 miles (85,300 km) and sunk or captured 16 merchant ships totalling 99,059 tons.