Although not the world’s first aeroplane with a variable-sweep wing, having been preceded by the Messerschmitt P.1101 that did not fly and the Bell X-5 that was purely a research type, the Jaguar was the world’s first variable-geometry fighter to achieve flight status. The type resulted directly from the US Navy’s fear that its new generation of turbojet-powered fighters would be outclassed, as a result of their straight wing planforms, by their land-based counterparts with swept wings. This straight wing planform had been retained in an effort to ensure compatibility with the demands of flight deck operations. The US Navy was concerned that high wing loadings and high landing speeds would hamper turbojet-powered warplanes in general and swept-wing warplanes in particular in operations to and from the aircraft carriers that formed its most important surface capability for three-dimensional warfare. The service appreciated, however, that swept wings did offer the promise of higher outright flight performance, albeit at the expense of a somewhat higher landing speed and therefore greater demand for flight deck length and/or arrester gear deceleration. As early as November 1946, therefore, Grumman started to collect design data for a swept-wing version of its F9F Panther straight-winged carrierborne fighter as had been stipulated in its contract for this important warplane.

The first result of this process was the G-83 design created by a team under the leadership of Gordon Israel. This was offered to the US Navy in September 1947 as a type that retained little of the F9F Panther but its forward fuselage (including the cockpit) and powerplant of one Pratt & Whitney J42 turbojet engine, which was the Americanised development of a British centrifugal-flow unit, the Rolls-Royce Nene. The G-83 was based on swept flying surfaces that comprised a clipped delta wing and a T-tail. The US Navy’s Bureau of Aeronautics was not altogether happy with the Grumman proposal, but in April 1948 placed a contract for the design and manufacture of two such prototypes for evaluation, with the designation XF10F-1, from a time initially stipulated as August 1949. There followed a saga of delay as the Bureau of Aeronautics constantly changed the details of its requirement and demanded that the new fighter should be powered by the Westinghouse J40 axial-flow turbojet engine, a unit that encountered endless problems before being cancelled.

So when the detailed specification was finally agreed in December 1950, Grumman’s new fighter was altogether different from the machine originally envisaged and bore no resemblance to the straight-winged F9F-2/5 Panther, the proposed G-83 with its clipped delta wing, or the swept-wing F9F-6/8 Cougar development of the Panther. The design of the new fighter still reflected the US Navy’s concerns about reconciling the high landing speed of the swept-wing warplane with the dictates of carrierborne operations. Created by Israel’s, the new G-83 design was therefore based on the need to reconcile high transonic performance and the combination of good low-speed handling characteristics and a low approach/landing speed. The design team’s task would not have been easy had it been attempting nothing more than a research type, but the US Navy was adamant that the new type should be considered as the basis for an operational fighter and therefore demanded the incorporation of radar, armament and sufficient internal fuel tankage for long range, which inevitably led to an escalation of size and weight: the span and normal take-off weight therefore increased from 32 ft 4 in (9.86 m) and 18,730 lb (8496 kg) respectively in the original G-83 design proposal to 50 ft 7 in (15.42 m) and 31,225 lb (14164 kg) respectively in the XF10F-1 as finally completed. 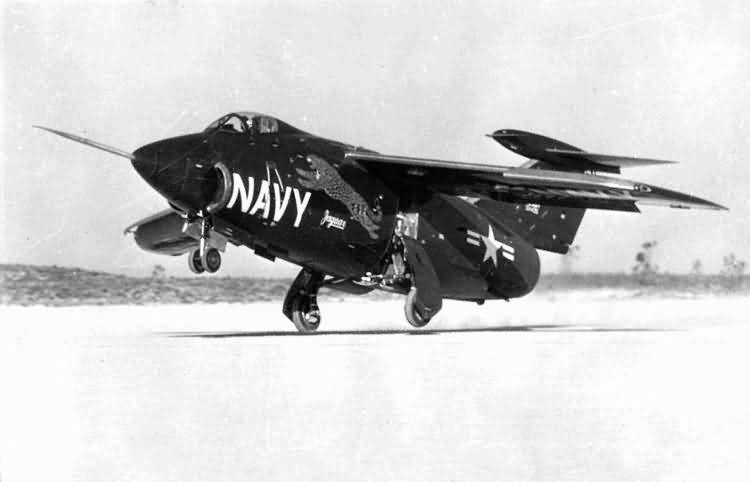 In was in this context of escalating size and weight that Grumman turned its attention to the concept of the variable-geometry wing planform as the means of finding one of the most attractive solutions to this difficulty, for such a planform offered the possibility of movement between a minimum-sweep position offering a higher aspect ratio, lower wing loading and greater controllability for lower-speed landings, and a maximum-sweep position whose higher wing loading and reduced drag permitted the generation of the best possible flight performance. Grumman began to consider the use of such a planform in the autumn of 1948 and proposed a variable-geometry solution to the US Navy in July 1949. There followed some 17 months of discussion and negotiation before the Bureau of Aeronautics issued its detailed specification of December 1950 calling for the XF10F-1 to have a shoulder-set wing fitted with a hydraulic actuation system to ensure smooth translation of the wing planform from a minimum-sweep angle of 13.5° and a maximum-sweep angle of 42.5°, as well as slats across the full span of the leading edges and Fowler type flaps extending across more than 80% of the trailing edges. Directional control was entrusted to a conventional rudder unit, but lateral control was provided by ailerons supplemented by spoilers (four above and four below each wing half) and longitudinal control was the province of a delta tailplane controlled by a servoplane tab at the leading edge of the bullet fairing and the junction of the vertical surface and the high-set horizontal surface. Other elements of the design fixed at this time were the powerplant of one J40 engine aspirated via cheek inlets and exhausting under the vertical tail surface, and tricycle landing gear with main units that retracted into the lower part of the capacious fuselage.

The XF10F-1 was a shoulder-wing monoplane of all-metal construction, and was based on an oval-section fuselage that carried, from front to rear, provision for the nose-mounted radar and fixed forward-firing armament, cockpit under a clear-view canopy with a rearward-sliding section for access and egress, main fuel and oil tanks, powerplant and tail unit. This carried the flying surfaces discussed above, and was itself supported by the landing gear that comprised the tricycle arrangement also discussed above as well as an extendible arrester hook under the rear fuselage immediately below the jetpipe whose nozzle was located under the wide-chord fin. 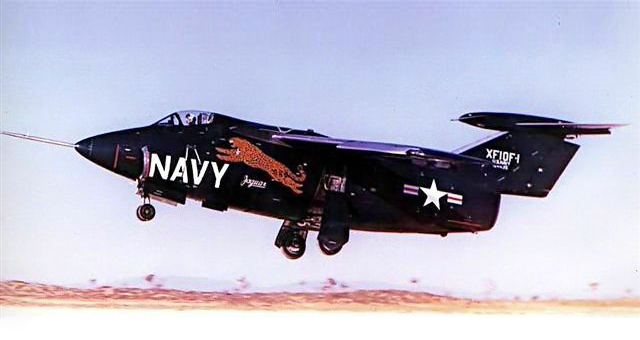 The problems with the J40 engine were already evident as construction of the first XF10F-1 proceeded, and lack of the intended afterburning version of this engine meant that the prototype (and in the event the only F10F aeroplane completed) was fitted with the XJ40-WE-6 non-afterburning engine rated at only 6,800 lb st (30.25 kN).

The prototype undertook taxiing trials at the Grumman’s Bethpage facility on Long Island, New York, before being partially dismantled and flown in a cargo aeroplane to Edward Air Force Base, California. The XF10F-1 recorded its maiden flight on 19 May 1952, and this was eventful as the slats refused to retract, there was considerable rudder buffet, and great trim changes resulted from movement of the flaps. Later flights also revealed longitudinal control problems with the original horizontal tail surface, and in fact it was found that the most effective and trouble-free feature of the aeroplane was its most radical element, namely the variable-geometry wing. Grumman made considerable efforts to eliminate the XF10F-1’s control problems by the addition of ‘horsal’ (horizontal ventral) fins from September 1952, the introduction of a large horizontal tail surface from January 1953 and then the replacement of this surface by the powered tailplane of the F9F-6 from April 1953. These alterations improved the handling of the XF10F-1 to a useful degree, but in April 1953 the US Navy cancelled all production contracts for the F10F, and the type’s end came a short time later when the failure of the J40 programme led to the grounding of all J40-powered aircraft.

At this time the second XF10F-1 was about 90% complete, but it seems clear that the US Navy’s decision was right as even if a reliable J40 afterburning engine had been available, it is unlikely that any F10F production model would have achieved the estimated performance on which the production order had been largely based.

Operational equipment: standard communication and navigation equipment, plus provision for APS-25 search and fire-control radar, and a gyro weapons sight