The British Army currently faces no major threat in terms of an operational- or strategic-level campaign against a technologically equal adversary, but of course there is no guarantee that such a threat will not emerge within the foreseeable future. Among other things, this means that several of the army’s higher-technology arms, such as the armoured and artillery arms, have equipment that is of no real value in today’s land warfare, in which the ‘enemy’ is likely to comprise lightly armed irregular forces fielding few weapons heavier than the heavy machine gun and rocket-propelled grenade. These current and possible foes are, however, skilled in the exploitation of their major strengths, such as a knowledge of the local terrain, the nature of the local population, and their commitment to a strong religious and/or ideological motivation. This is what makes the Afghan insurgent forces so difficult an opposition to the allied forces battling them in Afghanistan and the borders of countries, such as Pakistan, with which Afghanistan shares a border. 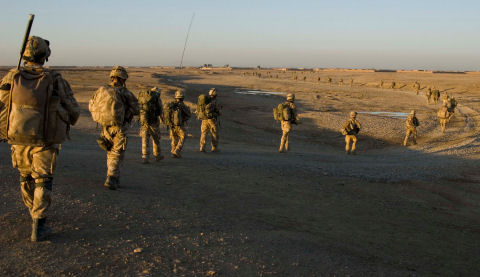 The American, British and allied troops fighting the Taliban in Afghanistan are just one example of this tendency, which can be found with little more than local differences in other parts of the world, such as Somalia, the Arabian peninsula, South-East Asia, the Philippines and several parts of Latin America. In some of these areas there are obvious political differences between the sides, but increasingly it is the religious aspect that has become predominant and is indeed continuing to come to the fore as the driving element in the division between the parties in each of today’s, and possibly tomorrow’s, bloody irregular wars.

So is the British Army focused to best effect on the ways of fighting irregular forces? I am of the opinion that it is not, for altogether too great an emphasis is still placed on what the Americans might describe as ‘legacy concepts’ stemming from the time when the greatest threat posed to the army was the possibility of fighting a land war in Europe. This would have been as part of the NATO alliance seeking to halt any westward offensive by the Warsaw Pact forces led by the now-defunct USSR. Such warfare was seen in terms of major armoured clashes between formations equipped with heavy and complex main battle tanks carrying powerful gun armament and protected by active countermeasures as well as advanced passive armour. In such clashes the primary armoured forces would have been supported by infantry delivered to and moved on the battlefield by tracked or, later, wheeled armoured personnel carriers and mechanised infantry fighting/combat vehicles. The primary task of the infantry would have been to hold flank positions and chokepoints from which to savage the enemy’s armour with specialised anti-tank missiles of the short-, medium- and long-range types launched from vehicles or by disembarked missile teams; tackle the enemy’s supporting fixed-wing warplanes and helicopters with surface-to-air missiles and/or advanced anti-aircraft cannon systems (themselves often carried on tracked chassis); and deny the enemy’s infantry the ability to undertake the same sort of task in support of their own armoured forces.

These forward-deployed forces would have been backed by longer-range weapons such as artillery, generally in the calibre bracket between 105 and 203 mm, able to fire accurately to a range of 40 km or more with a whole spectrum of projectile types, and in later years multiple-launch rocket systems firing generally unguided but in some cases guided projectiles also able to deliver a multitude of warhead types in the area-saturation or, later, point attack roles. Both the artillery and rocket systems were based on tracked or, in some later cases, wheeled chassis designed to provide the same level of battlefield mobility as possessed by the forward forces, and so enhance tactical mobility and allow ‘shoot-and-scoot’ tactics in which the system fired and then left the area before the enemy’s artillery and rocket systems saturated the area with counter-fire.

Such was the logic round with the land warfare of the ‘Cold War’ was planned and developed. In this the critical factor, for each side, was the need to combat an enemy with similar weapons. NATO’s essentially defensive posture was centred on the alliance’s willingness to trade space and so buy the time in which more forces could be deployed, and their air forces could decimate the Warsaw Pact’s ever-lengthening lines of communication and so force them to a halt. Only then would the NATO forces have launched their counteroffensive.

This is not a tactical concept relevant to today’s irregular campaigns such as that in Afghanistan. As noted above, here the enemy has no medium- or large-calibre weapons, uses 4×4 light trucks and all-terrain vehicles such as quad bikes and motorcycles rather than tracked and wheeled armoured vehicles, and has no air power of any type. Yet the US-led forces fighting the Taliban in Afghanistan persist with with use of larger-calibre weapons, heavy vehicles (now mostly of the wheeled rather than the tracked type), and stand-off missiles that can yield useful military results but all too often cause the civilian casualties that further alienate the local population.

So, I would argue, the time is more than ripe for a reassessment of how the army is organised, equipped and trained. I do not believe that we should revert to something analogous to the infamous ‘ten-year rule’ of the 1920s and 1930s when, largely for cost-cutting purposes, it became accepted that the possibility of major warfare would be detected at least 10 years in advance and allow the armed forces to be enlarged and re-equipped in time for such a major war. But what the army and its political leaders should consider is a significant reduction of the heavier forces (armour and artillery), which should be trimmed to excellently equipped cadres of very high quality, so paving the way to rapid and effective force enlargement as and when needed. This would allow greater manpower and enlarged resources to be devoted to lighter branches of the service, such as infantry carried in mine-resistant armoured trucks backed by short-range mortars and long-range artillery mounted on modest numbers of wheeled chassis. It was along these lines that South Africa developed its army from the mid-1960s, and this proved highly successful in tactical-level operations in all terrains against the various anti-apartheid insurgent groups against which South Africa fought until the advent of black majority rule in 1993/94.

This, I suggest, should be the model along which the British Army should be reshaped for the type of anti-insurgency warfare in which it now finds itself. In short there should be less emphasis on outright technical superiority in heavier weapons, although technological improvements should not be eschewed as long as they make a direct contribution to the tactical battlefield, and greater emphasis on the development of the infantryman’s capabilities within the tactical team as a individual fighting soldier. The infantryman should be better paid and fed, physically fitter, more highly trained in basic soldiering qualities such as greater fire discipline, better educated to improve initiative and command potential, and provided with superior ‘net-centric’ equipment in matters such as communications gear. What has to be avoided, and this will be a very difficult task, is the burdening of the infantryman with so much equipment that his mobility is still further impaired, he finds it difficult to regulate his temperature, and he becomes exhausted very quickly.