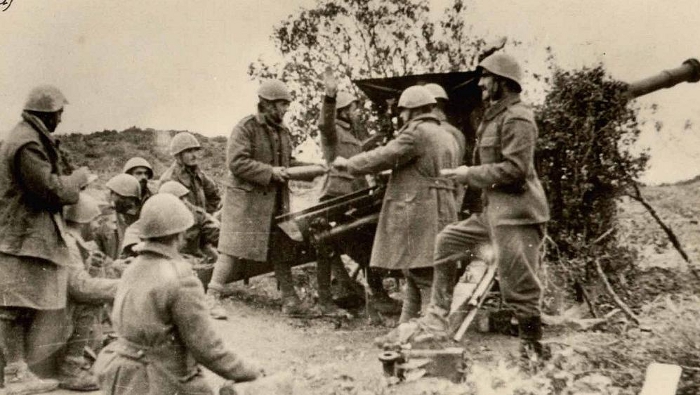 For the previous installment, see The Start of Italy’s European Disaster – ‘Emergenza G’ and the Invasion of Greece (part 1)

With the Italians inactive in western Macedonia, the Greek high command moved Antistrátegos Georgios Tsolakoglou’s III Corps (10th and 11th Divisions and the Cavalry Brigade) into the area on 31 October with orders to attack into Albania together with TSDM. For logistical reasons, however, this attack was steadily postponed until 14 November. Caught totally by surprise by this unexpected Greek resistance, the Comando Supremo quickly sent several more divisions to Albania, and cancelled all plans for subsidiary attacks on Greek islands. Enraged by the lack of progress, Mussolini reshuffled the Italian command in Albania, replacing Prasca with General d’Armata Ubaldo Soddu, his former vice-minister of war, on 9 November. Immediately upon arrival, Soddu ordered his forces to go over to the defensive. It was clear that the Italian invasion had failed. Greek reserves started to arrive at the front early in November, and Bulgaria’s decision not to intervene made it possible for the Greek high command to transfer to the Albanian front the majority of the divisions it had deployed on the Greek/Bulgarian border. This allowed Papagos to establish a clear numerical superiority, including a greater proportion of men trained for mountain warfare, by mid-November before he launched the Greek counter-offensive.

Steadily reinforced with units from all over northern Greece, the TSDM and III Corps launched their counter-offensive on 14 November in the direction of Korçë. This was the Battle of Morava-Ivan, which was the first major Greek offensive of the war, and took place on the north-eastern flank of the front in the area where the Italian forces had remained on the defensive during the initial Italian invasion of Epiros. The offensive’s basic plan had been decided by the Greek general staff even before the start of the war on 28 October. Greek intelligence had fixed fairly accurately the dispositions of the Italian forces in Albania, and the Greeks were therefore able to conclude that the Italians planned to make their major effort toward Epiros while keeping a defensive posture on the western Macedonian sector. The Greek plan was finalised in the second half of September, and ordained that the Greek forces in western Macedonia would remain on the defensive, albeit with limited attacks into Albania to improve their positions, until they had been reinforced. Then they would go over to the offensive with the object of taking Korçë, which was an important communications centre, and also boosting the morale of the Greek forces and nation. The forces initially available to the Greeks in this sector were the 9th Division and 4th Brigade, both of them infantry elements of the III Corps.

In the first three days of the war they had not been attacked in any appreciable scale, but then between 1 and 6 November began their own limited offensives, entering Albania in some places. During these clashes it was revealed that they faced the 49th Division, 29th Division and 19th Division of the XXVI Corps. The terrain favoured the defence, but offered no possibility of defence in depth. The Greek and Italian positions were separated by the Devoll river valley. North of the valley lies Mt Morava, a continuation of the Grammos mountains, with a maximum altitude of 5,932 ft (1808 m), and north of this lies the Korçë plateau. The Morava massif provided the Italians good defensive positions, but their lack of depth meant that should their defences on Mt Morava collapse the Italians had no option but to abandon Korçë and the Korçë plateau, and retreat north to the Kandauian mountains. The upper Devoll valley communicates with the Korçë plateau through the Cangonj (Tsangoni) pass, defined by Mt Morava to the south and Mt Ivan to the north. Mt Ivan is steep and attains a height of 5,807 ft (1770 m). There was a paved road through the Cangonj, and another paved road, in the southern part of Mt Morava, crossed the mountain towards Korçë By 13 November the Greek forces concentrated for the attack were the 9th, 10th and 15th Divisions, the last expanded from the 4th Brigade, in Tsolakoglou’s III Corps, itself part of the Pitsikas’s Army Section of Western Macedonia. Reinforcement was also on the move to this area in the form of the 11th and 13th Divisions, and during the forthcoming battle the 10th and 11th Divisions came under the command of Antistrátegos Georgios Kosmas’s ‘K’ Divisional Group.

The Greeks planned to make their major offensive effort on the left, along the mountainous Darza road, rather through the Cangonj pass, as there were fears that the Italians could use armour through the pass’ relatively open terrain: the Greek deployment placed the 15th Division on the right, the 9th Division in the centre and the 10th Division on the left. The 15th Division had the task of moving towards the Cangonj pass, between Mts Ivan and Morava, and capturing its western exit. The 9th Division was to attack toward Mt Morava, co-ordinating its left flank with the 10th Division. The 10th Division had the task of penetrating the Italian position and flanking the Italian positions on Mt Morava. There was severe fighting on the fortified frontier line before the Greeks broke through on 17 November. The Greeks had entered the battle with some 45,000 men and 200 guns against an Italian total of 80,000 men and 200 guns, and the Italians lost 625 men killed and 2,350 wounded. The Greek forces entered Korçë on 22 November, and here the Greek high command revealed a measure of indecision, which allowed the Italians to break contact and regroup, thereby avoiding a total collapse. Thus the attack from western Macedonia against the left of the Italian front was combined with a general offensive along the entire front.

The I and II Corps advanced in Epiros, and after hard fighting captured Sarandë, Pogradec and Gjirokastër by a time early in December, and Himarë on 24 December, occupying practically the whole of southern Albania, to a depth varying between 18.5 and 50 miles (30 and 80 km), between Himarë on the coast, Tepelenë just below the confluence of the Vjosë and Dhrina rivers, Berat on the Devoll river, Elbasan on the Shkumbin river, and the western side of Lake Okhrida. The Greek counteroffensive’s greatest success came between 6 and 11 January as the II Corps forced the strategically important and heavily fortified Klisura pass. Following the Battle of Morava-Ivan, the Greek army penetrated deep into Italian-held Albanian territory, and at conference on 5 December Papagos, concerned about the possibility of German intervention in support of the Italians, attempted to hasten the advance. Pitsikas and Tsolakoglou suggested the immediate capture of the Klisura pass as the best method of securing the Greek positions. Meanwhile, in mid-December, Soddu had been replaced as the Italian commander-in-chief by Generale d’Armata Ugo Cavallero. During their counter-offensive, the Greek forces became increasingly hampered by the steadily greater length of their lines of communication, all the more so as their logistics and road network were substantially inferior to those of the Italians, whose lines of communication were shortening as they retreated.

The Klisura pass was a strategic location near Berat, and here the terrain combined with the weather to make the Greek operation extremely difficult. The attack was planned and implemented by the II Corps, which used primarily its 1st and 11th Divisions. In the battle that followed, the Italians for the first time used their new M13 medium tank, which was fielded by the 131st Armoured Division. The tanks were used in frontal attacks, but the result was disastrous for the Italians as the tanks were decimated by Greek artillery fire. On 10 January, after four days of combat, the Greek divisions captured the pass. The final assault was led by the freshly arrived 5th Division, which consisted mainly of Cretans. The Italian headquarters immediately launched counterattacks to recapture the sector. Cavallero ordered Generale di Divisione Alberto Roda’s newly arrived 7th Division ‘Lupi di Toscana’ to support the 3rd Alpini Division, but the operation was hastily and poorly prepared. Although they faced only four Greek battalions, the Italian soon lost one of their own battalions when this was encircled and forced to surrender. By 11 January the Italian counterattack had proved completely fruitless and the pass remained in Greek hands.

On the right the Greeks did not succeed in breaking through toward Berat, however, and their offensive towards Vlorë (Valona) failed. In the fight for Vlorë, the Italians suffered serious losses to their 7th Division, 3rd Alpini Division, Generale di Divisione Giuseppe de Stefanis’s 24th Division ‘Pinerolo’ and Generale di Divisione Amedeo de Cia’s 5th Alpini Division ‘Pusteria’, but by the end of January, the combination of fresh Italian reinforcements and Greek logistical problems finally halted the Greek counteroffensive. On the front stalemate continued through the rest of the winter, despite local actions, as neither side had the strength to launch a major effort. Despite their gains, however, the Greeks were in a precarious position, as they had virtually stripped their northern frontier of weapons and men in order to sustain the Albanian front, and were too weak to resist a possible German attack via Bulgaria.

Eager to defeat the Greeks and also to secure a real territorial advantage before German forces became embroiled in the Balkans in the parallel ‘Unternehmen 25’ against Yugoslavia and ‘Marita’ against Greece, the Italians now planned their ‘Primavera’ spring offensive, which lasted from 9 to 16 March 1941. This was the last Italian attempt of the war to defeat the Greek forces which had advanced deep into Albanian territory. In February 1941 the Italians began intense preparations to strengthen their forces in Albania, and by the end of the month the 15 Italian divisions in Albania had been bolstered by the arrival of another 10 divisions. To raise the morale of the soldiers, Mussolini ordered the new formations and units to be accompanied by the most aggressive Fascist cadres, and also by government ministers and other high-ranking officials. The operation was controlled directly by Mussolini, who reached Tiranë (Tirana) on 2 March.

The offensive began on 9 March under the operational command of Geloso. The start of the operation was marked by a heavy bombardment of the Greek positions by artillery and aircraft before 11 infantry divisions and the 131st Armoured Division moved forward. The assault fell primarily on the 1st, 2nd, 5th, 11th, 15th and 17th Divisions, which were subjected to waves of Italian attacks. There was severe fighting between the Osum and Vjosë rivers in an area dominated by the Trebeshinë heights. On 14 March Cavallero, appreciating that the attacks were unable to break through the Greek line, advised Mussolini to halt the offensive. Fierce fighting took place on height named only as ‘731’, which was assaulted without success on at least 18 occasions. On their side of the front, the Greeks were undertaking an active defence including the use of prepared and improvised counterattacks when the Italians approached their lines, and also of systematic exploitation of terrain features. The decisive factors for the final Italian defeat was the high level of Greek morale and the fact that the Italians could not neutralise the Greek artillery.

It is also worth noting that on 4 March the British sent their first convoy of troops and supplies from North Africa to Greece under the command of Lieutenant General Sir Henry Maitland Wilson. The British force comprised four divisions, two of them armoured, with 57,000 men. None of the British troops reached the front in time to become involved in the defeat of ‘Primavera’, however.